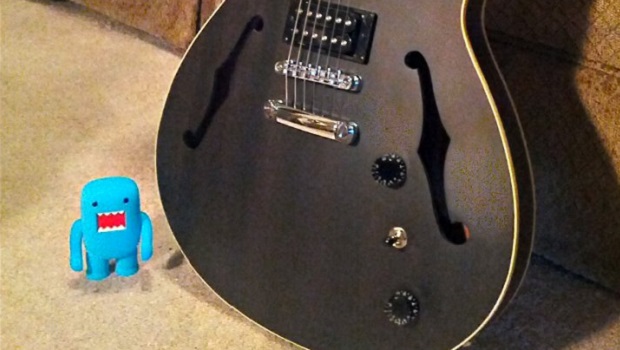 Released last week, Grant “Stemage” Henry’s RETROGRESSION Volume 1 is a collection of classic video game tracks played in reverse. The concept was so interesting that we wanted to talk with Henry to discuss how the EP was created, as well as how video games have influenced his musical career.

Let’s get this out of the way first: How did you come up with this crazy cool idea?

I’ve always loved the idea of flipping melodies for coming up with new ideas. Nintendo did it themselves with Skyward Sword’s theme by using a backwards version of “Zelda’s Lullaby”. Then my friend’s band Lazer Wulf put out an album where the second half of the album was the first half in reverse. The concept just kept coming back up.

I simply wondered if the most recognizable game tune ever would sound any good backwards. That kicked off the research.

While reverse video footage looks cool, reversed audio… is usually weird. How did you use this reverse principle to your advantage?

You’re right. Video and audio in reverse are both comical, but music in reverse is unnerving in a different way. If you take a recorded performance and reverse it with software, it has this otherworldly sucking sound to it. It’s just not right, sonically. However, if you actually perform the music backwards, it takes on a different character. It actually sounds like music that is supposed to exist, and it’s just familiar enough to be uncomfortable – especially if it is music that you know well.

In the end, it was more of a disadvantage than an advantage – making the whole thing musical I mean. But it was a great exercise in using drums to aide the listener and help them latch onto the song in a way they might not otherwise. I used drums to steer people around the melodies and keep the songs locked down in a way that I thought they should be.

On the EP, the original tracks were played normally “in reverse”, and then played “in reverse” but sounded normally. How did you go about flipping the arrangements in order to make them sound like that?

I thought about including the reversed songs as hidden tracks, but the concept is bonkers enough that I thought the songs would be useful for reference. Otherwise, people may never know which parts of Punch Out! they were hearing. It’s sort of fun to go back and forth between the backwards and forwards version to see what the heck happened. And again, that sucking sound – I left the drums off of those versions for that very reason.

How long was development for this EP? It would seem like it would take ages to arrange these tracks!

It didn’t take as long as you might think. The hardest part was pulling off the performance since all these songs are a bit tricky on guitar. Most video game songs are. I worked on it on and off for a while. I wanted to keep it tight, so I left it at four songs for the experiment. I worked on some other songs as well, but they just didn’t sound all that good. You’d be surprised how uninteresting some NES classics actually are in reverse. These were four songs that spoke to me.

The four (well, eight) track RETROGRESSION is filled with some pretty classic games. What made you decide on arranging these tracks for the EP?

I started by hunting for some of my personal favorites – songs that run through my blood. I also included ones that are generally familiar. In the end, I simply selected the four that made the most sense given what I was hearing at the time. I knew I wanted to do a song without rock instrumentation as well, and Tetris was perfect for that.

Speaking of the number four, I just realized that you also only used four instruments; were there any limitations to going about mixing the music with just four channels?

It actually made things easier. In general, I tend to overdo my game arrangements because it’s what I love, but limiting myself to only the four channels of the NES chip meant that I could only do a straight cover, unless there were any rhythmic oddities that were so bad that they needed to be adjusted for listenability. I did that in a few spots on Super Mario Bros. I wanted them to be as close to the originals as possible, but I also wanted to make sure it remained musical.

Are there any hidden details in the EP we should know about? Maybe a hidden medley inside one of the arrangements?

That’s so funny, I thought about doing that very thing!

In the end, the concept is so out there, the album basically opens a wormhole by itself without the help of other cryptic doings. Be safe out there, kids!

What were your favorite games to play growing up, and how did video games affect your music career?

I started with a 2600 and owned all the Nintendo consoles except for the 64. Adventure games, racers, space shooters, and arcade games were my bread and butter. I feel like the music in games helped me stay with some longer than others. Bionic Commando was one of those games I could just beat every day – probably because of the music. I fell into literal Marble Madness for the same reasons.

Regarding my musical career, I feel like I really owe it to video games – specifically Metroid – and I am a better guitar player, better song writer, better engineer, and into more kinds of music because of it all.

NES-style chiptunes were musically limited (by necessity), but still end up being classics today. Why do you think gamers go back to the 8-bit era after all these years, and how do artists and bands react to it?

The big creative successes have come out of big limitations. If you only had these channels to work with, you had better make them all count, and composers did just that. Now, you have limitless technology and sonic landscapes to explore. It’s a blank sheet of paper that stretches in every direction forever. That doesn’t help creativity. I feel that being forced to work under constraints makes the best art.

I think artists forced to work with these limitations appreciate it without really thinking about it. And in the end, people love it, simply because it’s good.

Random question; you’re the founder of Metroid Metal, so how did you feel about the duo of Metroid games that were recently announced at E3?

I’m so excited! I just preordered my first Amiibo – the squishy one. The Samus Returns impressions have been quite good in the last few weeks. And the fact that Nintendo is acknowledging the Prime series again makes me swoon. Metroid Prime is my favorite game experience of all time, so I’m up for whatever they’re cooking – even if it takes two more years to get here.

For the past twenty years, you’ve had the same green guitar on all of your shows. Could you tell us a little more about it?

She doesn’t have a name, but she’s a girl. When I was 18, I had her made by Carvin with the little savings I had. It was sort of an accident, but she’s all I have needed for the most part. Other guitars have come and gone, but she’s the first thing I reach for and has appeared on just about everything I’ve put out. There are some sounds that she refuses to make, but hey, we’re not all perfect?

I’ll tell her you asked about her.

You’ve done a lot of other original work and collaborations as well. What are your main influences in your music?

Most of my influences are from rock and progressive music. I like weird stuff. I may not always make weird stuff, but some of that stuff sneaks in. I started playing guitar because of Steve Vai, The Police, and Guns n’ Roses, but you might not know it. It’s still there though. It’s in there somewhere.

Will there be any plans for a RETROGRESSION Volume 2 in the near future?

I stuck the Volume 1 on there as a History of the World: Part 1 joke. But I left it on because it does give me the opportunity to explore this idea a bit further if inspired. In retrospect, I should have planned on two releases and released Volume 2 first! That idea came too late.

Thank you for the interest! You can read up and listen to my body of work at stemagemusic.com and metroidmetal.com. I’m currently working as a composer, and some games are releasing this year with my music in them. It’s time to pay it all back, right?

You can download RETROGRESSION Volume 1 on Bandcamp. Stemage was recently featured in The Metronomicon, and will be contributing to the upcoming Big’s Big Fishing Adventure 3. He is available for collaborative work on his website. Stay tuned for more news here on Gaming Trend.