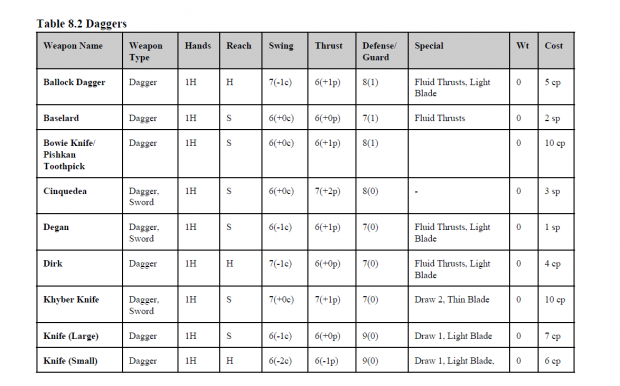 Song of Swords is a tabletop RPG currently seeking funding on Kickstarter. It prides itself as a historically accurate medieval combat game, with extensive sets of arms, armor, and maneuvers. This forces some hard questions in terms of game design, and the designers at Opaque Industries provided their thoughts on how to integrate these elements.

GT: Can you start with a brief introduction of your team and Song of Swords itself?
OI: Absolutely! The three of us (Zach, James, and Taylor) have been gaming together since high school. We always wanted more from the TTRPGs we were playing–and it was Zach’s idea to make it a business. We’ve worked for years on this–playtesting with an outrageously supportive (and critical) community all the while. Between the three of us we have years of experience working in tabletop, video, and mobile games.

Song of Swords itself is a tabletop roleplaying game that takes place in a dark, low fantasy world, and focuses on offering tactical gameplay, and meaningful risk/reward decision making. Specifically we do this through combat. You pick where you attack, how much effort goes into it, and what kind of attack it is. It’s insanely fun to be perfectly honest.

GT: What is your philosophy for game design?
OI: Player choice. Easily. I know that sounds obvious, that’s what tabletop games are all about, but really think about it: as a Rogue in D&D are you going to do anything but sneak attack? As a Barbarian aren’t you always going to rage, then hit something with your axe? Perhaps you decide when to rage but that’s mostly it. Everything in Song of Swords is built around players being able to make meaningful risk vs reward decisions in combat, and really play the game how they want. We wanted to bring the freedom that roleplaying games have out of combat, into combat.

GT: How do you go about modeling real world arms and techniques into something like a game? There are a lot of small details that separate two similar swords or armor types. How do you translate those into the game?
OI: A lot of research. And frankly a lot of conversation. There are great experts online, within and outside of our community, who love to discuss historical arms and armor. A lot of our combat maneuvers were inspired from historical fechtbuchs (fighting manuals) and other accounts.

So to translate that into a game: Jimmy in particular spends a lot of time talking to people, does his research, and then takes those notes back to the design table. The really important design moments come in when historical accuracy would conflict with game balance and health, that’s a very important division to navigate.

For us, this meant there were several times in which we had to rebalance entire categories of armor, or re-examine what kind of advantages reach gives you, etc. Basically to develop a game with the utmost respect to history as possible, we needed to be willing to scrap things, and re-do them.

GT: Similarly, how much is too much? You want to give players options but at a certain point you may overload them. Where do you see that line?
OI: That’s a great question actually. I have friends who look at, say the massive weapons list, and their eyes glaze over–at the same time we have community members who have been (and are still) rallying for more!

But for us I’d say that the line is when gameplay, and the rules start getting in the way. We have so many arms and armor because we want players to be able to find something that really suits their fantasy. We don’t want to have so many that it’s overwhelming and intimidating.

This is only a part of the daggers table. There needs to be genuine variance for this to be worth it.

What we currently have I think is a happy medium. We’re making a lot of easy-reference materials (such as pre-made armor sets on cards, GM screen inserts with quick rules references) to ease in players who don’t want to have the burden of knowledge, while also being accessible to those who want more.
Additionally, many rules (such as infection) are optional–and we’re really focused on presenting them as such.

Judging by the quick success of the Kickstarter (fully funded in 24 hours), and the discussions on various message boards, I think we’ve hit that sweet spot.

GT: You also have to balance that realism against making a fun game. Can you speak a bit about how you maintain that balance through the process of designing?
OI: I’m happy to say that, that is a constant conversation. Essentially, as we design rules and mechanics, we have someone take on the role of the expert on “realism”, and the others be a defender for “simplicity”. Ultimately I think that it’s within the balance of those two that “fun” can be found for Song of Swords.

A common pitfall I think many other games fall into is this: it’s SO easy in design to look at something on paper and go “yeah this looks like it’s well balanced between realism and fun”–but the ultimate test for anything in a game (tabletop or otherwise) is to put it in front of players (a LOT of players) and see what they say. Players won’t be able to actually give you the answer to a problem, but they’re great at identifying things that feel wrong to them. And if that happens it’s back to the drawing board (something we’ve done a number of times).

If anyone out there is ever struggling to balance such things in a game, the best answer is always: test it!

GT: How do the fantasy elements come into that? There are some fantastically fun things you can do with magic or magical materials (such as orichalcum). How do these influence the design?
OI: Despite our dedication to historical accuracy, the setting of Song of Swords is indeed one of fantasy. We took a lot of fantasy tropes and asked ourselves “How would this have fared in real-world history? How would history have reacted?” And then it became a back and forth of creation. Jimmy really gave the world its own unique flavoring that you can get by reading the wiki and checking out the art. Nothing is like you would think it is–in fact even going to the website and reading the brief quotes about each playable race should give you a good idea.

Elves are cool, especially with the re-flavoring that Song of Swords has given them. They were not, however, huge players in medieval politics

A lot of the fantasy elements come into play in the races. Each one has a series of abilities that allow players to do some truly amazing things. And that’s not even to speak of the upcoming Magic Compendium.

Fantasy elements of Song of Swords influenced game design in that we had to present them in a ‘realistic’ way. We had to balance things so that a historically depicted human knight with a sword and shield could go toe-to-toe with classic fantasy races. Or fight giant monsters and dragons. Really, it was from combining these two in the beginning that gave Song of Swords the feel it has right now. Yes, combat and weaponry is historically inspired, but that doesn’t mean there aren’t fantastic, aspects to them. You can enhance your weapon with special material, you can perform acts of daring that wouldn’t be otherwise possible if you build your character right. This is a game we made for both history fans and fantasy fans. And it really does play that way as well.

GT: There are some existing systems which use similar elements as Song of Swords. What inspired you to make your own game and what are the main differences that you feel make it stand out?
OI: We tried a lot of systems before getting to where we are now. Ultimately we felt nothing really focused on what the core issue was. Some systems were really dedicated to 1v1 duels, but lacked the ability to handle multi-person fights. Others were great with history but really lacking in supportive mechanics, such as magic–or some had honestly a lot of good going for them, but suffered from broken mechanics, or major balance issues.

At the end of the day, there wasn’t anything we found that fit the “historical fantasy” genre in both lore and gameplay. Let alone anything modern.

I think Song of Swords is going to be the most polished, refined version of any of these. The flow of combat, the unique take on magic, and the amazing races and world of Vosca will shine through for players. We are huge fans of systems that have similar goals, but we’re also approaching it with much more modern design sensibilities.

Gt: At least one member of your team has a background in medieval history. Could you speak to what kind of research you need to perform before working on a project of this size and how does that change the game?
OI: I can honestly say that for Jimmy the research never stopped. He was always reading history books in high school. Not just classic medieval history mind you–all of it. Back to pre-Roman Empire. Every time we get together, to this day, he will drop some random story from the oddest corners of history. When Song of Swords was first starting out he actually took it upon himself to meet with teachers and experts on subjects, he spent months on message boards, really digging into the details of history as a whole.

This is what martial arts manuals look like before developers get at them. Core books take a lot of reading and translating to get completed.

It changes the game in interesting ways. I think it really helped to build the setting–there’s so much richness to gain from looking at historical stories and creating a brand new world that’s split with fantasy.
In terms of game design it gave a lot of context for our initial balancing and structure. We basically started as an unbalanced realistic simulator, then boiled it down into a fun enjoyable game.

GT:Song of Swords has already successfully funded, but where would you like to see this game line go in the future? Do you see yourself branching out into other projects?
OI: It has, and we couldn’t be more excited! This next year is going to be almost entirely dedicated to delivering on the final product that the Kickstarter is funding. While this is our first book project as a team, there is a substantial amount of game and production experience between us–so we’re going to make sure we get everything right.

Regarding the future, we absolutely want to grow both Song of Swords as our flagship title, and Opaque Industries as a company. There are a lot of supporting rules the fans want (naval combat, kingdom building, mass army rules, historical supplements) that we’re going to look into.

As for other projects, we intend to fully support and grow Song of Swords indefinitely. That being said there is a sci-fi project Jimmy has been working on and playtesting with that we have our eyes on for the future.