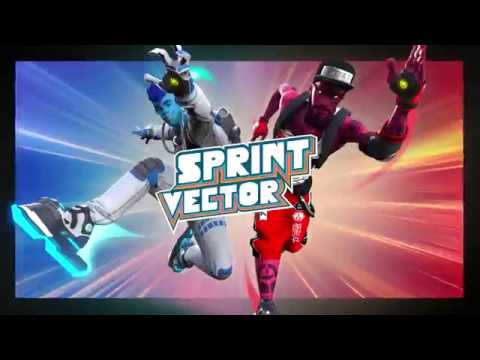 We sat down with Mike McTyre, Design Director of Survios for a quick Q&A on their smash hit Early Access VR title, Raw Data.  GDC has spelled some great announcements for the company, showcasing cross-platform play with Oculus Rift and Touch, as well as a new IP entitled Sprint Vector.   Before we jump into the new information on Raw Data, let’s take a quick sneak peek at this hardcore parkour work in progress.

GT: Nearly every VR guide recommends Raw Data in their must-have list. What’s that sort of reception like been for the team?

The team has been really happy with the performance of Raw Data. Not just the way it has been selling but how it has been received. We love looking at responses from the fans. They’ve been so engaging and that’s been so fulfilling. It drives us to implement new and exciting features.

GT: You’ve got some obvious nods to popular culture like Metal Gear and Equilibrium. What other influences did the team have building Raw Data?

All of the influence came from being fanboys. We love pop culture, we love superheroes, we love action films and the goal here was to give you that ultimate experience where you can combine all three. VR is the only place where you can truly just get lost in your environment and forget that reality has been suspended. We want to mimic what it would be to truly embody being a superhero. When you play Raw Data, that’s what happens.

GT:  What has been the biggest surprise you’ve found running Raw Data through the Early Access system? Have you users playing the game in ways you didn’t expect?

That’s the cool thing about early access…we had something we loved but hadn’t finish it yet but couldn’t wait to share Raw Data. So we put the game out there and waited.

Then, to hear from our community in a positive way is so fulfilling because it means they feel a connection with us through Raw Data. We want them to know we hear their voice and encourage them to get involved. Raw Data has gotten better because of the fans, that’s the simple truth. We see them send us videos of them doing cool tricks with the weapons that we didn’t account for at first. That’s incredible for us as game designers – keep sending us those videos. We love seeing ours fans living out those superhero moments.

GT: What can you share about update 0.6? Any surprises you’d care to spoil for our readership?

The big overall focus is the expansion onto the Oculus platform and the cross-compatibility aspect that now becomes available. We aren’t just making a new community, we are expanding it and that’s exciting.

Getting more gameplay/character-centric, two of the three playable heroes, Saija and Boss, will both receive powerful new abilities and extensive reworks. This is again tied to player feedback and going back into the models to tweak for more fun and innovation. What we love to do is edit the characters, give them new abilities and then test them to the max. For example, our newest level is called “Cataclysm.” Players will fend off deadly enemies while traveling on a moving elevator platform within Eden Corp’s mysterious Data Chamber.

It pushes that superhero dynamic even further as enemies will now come from all over as you are in a confined space that makes it more immersive.

GT: Raw Data is one of the only VR games that support cooperative multiplayer — was the original plan to make a multiplayer title, or did that evolve as the Alpha did?

What’s interesting is people thought that in the beginning VR would make people less cooperative/social, but we always knew from that would be the opposite. We actually get more social interaction and engagement. Through the VR model, you interact at a level that just feels completely different. You’re actually playing with a person, not next to them.

GT: Room scale VR has been very hit or miss. What’s been the biggest obstacle to making a game that uses all 360 degrees of movement?

It hasn’t really been a huge obstacle…it’s just accepting those are the boundaries. We weren’t trying to design around it but adapt to it. The main thing is we wanted to have that big room scale experience and be interactive but also we were trying to be smart about it. We built a lot of the mechanics in to pull the action closer to you. For example, t the enemies, come close to you on purpose. Originally, we kept them at a distance to allow for a more expansive experience. But, we realized putting them right in your face or over your head creates more immersion. We know everyone’s setup is unique and varies, but we wanted to insure that you would get the best experience possible. That’s also why we’ve teamed with a number of VR arcades so no matter what type of space you have in your home, you can go out and play an even more massive playing field.

GT: Unreal Engine 4 has been the engine of choice for VR. What advantages have you found working with that engine?

It’s just been fantastic – not just because we’ve been able to create things using their innovations but because of their support. Epic Games, the creator of the Unreal Engine, has been an amazing partner across the board. Every time they optimize it, the Unreal Engine gives us and other developers more performance. This bigger boost from the Unreal Engine, is why this Raw Data is able to keep expanding.

GT: In the current build, the game features a robust wave-based combat system. Are there any plans to build a story-based mode for Raw Data? Perhaps as DLC?

We aren’t ready to discuss our plans yet, but with that being said, we would love to expand the Raw Data universe.

GT: You will be announcing cross-compatibility with the Oculus Rift at GDC 2017. Did you run into any challenges blending the two platforms and their unique touch control mechanisms?

It really was just the inherent back-end challenge any designer would have in general. This is a high quality system so it is working with our internal tech team to really drill down into the details. We wanted it to be seamless and intuitive. The controller movements required some additional work because as mentioned earlier, not all Oculus players will have the full 360 cameras. Either way, we wanted to make sure you had a great experience no matter what.

GT: Saija, the cyberninja in Raw Data, uses a sword. Melee is notoriously difficult to pull off in virtual space. How did you overcome some of those obstacles?

That’s actually something we are still working on and you’ll see that in that future updates. We really just want to keep making the game better and better. A lot of those traditional movements come down to having them respond at the right time and mixing that with the character’s behavior. Again like with the enemies, they come close for a reason.

GT: The next character in development uses a bow. How have you differentiated the combat style with an archery user versus Bishop, a pistol user?

We’ve always wanted to focus on four different hero characters and as part of that we wanted each to have a different feel when they fight. The goal was that no matter the character, the user gets a different experience that all play to different aspects of VR in general. So, without giving too many details away, you can see how having a character with a bow adds so much to the game and you can imagine how you’ll have play differently to advance in the game. It’s not just a new gameplay element, but a new strategy element.

GT: What’s the one feature of Raw Data you feel like you’d like to hammer on a little more before launch?

There really isn’t just one feature to pinpoint. As we get closer to launch, the Survios team will add more content, features and increase the game performance so players will experience our vision for Raw Data.

If I had to name one thing, it would just be continuing to drive that immersion effect. We really want you to feel like you are in this giant action film where you cut loose and do things you wouldn’t/couldn’t do in real life. If we achieve that for the player, it is the greatest reward we can receive.

Again, our thanks to the team at Survios and Mike McTyre for taking our time during what has to be one of the busiest times of year for them!   We appreciate the look behind the scene of one of the best VR titles currently on the market.  Look for our hands-on preview shortly!