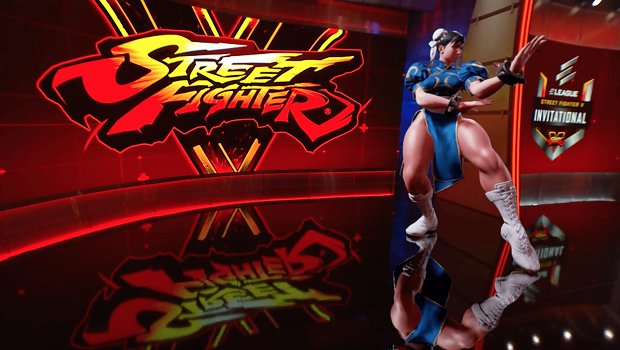 Last month, Eleague’s Street Fighter V Invitational was broadcast on TBS; The company partnered with TheFuture Group and Ross Video to bring augmented character visuals to the broadcast. The Future Group’s cutting-edge graphical rendering platform, Frontier, which is based on Unreal engine, brought Street Fighter’s legendary characters to life in the G Fuel Eleague Arena while being shown in real time to TBS viewers at home. We got to speak with Bård Anders Kasin, co-Founder and CEO of The Future Group, to talk about the company’s interactive mixed reality technology, as well as how it will change the way we experience eSports and other gaming events.

Gaming Trend (GT): The Future Group is the first producer of Interactive Mixed Reality. Could you give our readers a brief rundown of the technology?

Bård Anders Kasin (BK): With our Mixed Reality technology we can put real people into virtual worlds, and let them interact with the virtual environment. We then take it one step further by letting other people interact with the same virtual environment through their tablet or smartphone. People at home can compete in the same challenges as the people in the studio, either against other players or against the contestants on TV. This is what we call Interactive Mixed Reality (IMR).

We have packaged this technology as a product called Frontier. Frontier is an innovative virtual studio graphics rendering platform which uses the Unreal gaming engine to provide photorealistic scenery. Frontier is sold through our partner Ross Video.

GT: What separates the Frontier IMR technology from something like VR or AR?

BK: While AR is all about placing virtual objects into the real world, VR is about immersing a person into a fully virtual world.

GT: How did you decide on running the Unreal engine for Frontier?

BK: Unreal Engine 4 has tremendous capabilities which enable us to create spectacular visuals both for a large-scale TV screen, and all the way down to a smartphone or tablet. Everything we create must seamlessly work in the same universe, also when we expand into VR and beyond.

GT: The Future Group used Frontier for the Street Fighter V Invitational. How do you plan on immersing viewers at the venue as well as those who are watching on TBS?

GT: Street Fighter has been a competitive favorite ever since the second game hit arcades decades ago. How will Frontier revitalize the experience for those who are veterans to the franchise?

BK: As you’re saying – Street Fighter is a great game that is captivating players all over the world, and we don’t think that it’s in need of revitalization as of such. What we can do though is add to an already great show and make it bigger, better and even more spectacular. This first broadcast was merely dipping our toes in the water and explore some of the possibilities, but we’re looking forward to taking this way further.

GT: What made Street Fighter V the right choice in showcasing Frontier’s technology to a wide audience?

The characters were so much fun to work with. They’re big, muscular, towering giants that’s out to kick ass. Not to mention that it’s a great game with fantastic fans all over the world, and a huge reach. Working with Turner was also a great experience. We very much appreciated the possibility to add something to the conversation.

GT: eSports have seen a huge renaissance in the past few years. How do you think the audience has contributed to the success of this pastime?

BK: The fans are extremely important for any sport, eSports included. The rise of streaming platforms like Twitch and the shift in how society see gamers has also greatly contributed to the rise in popularity. Where there’s a steady, increasing viewership there will sooner or later be companies and sponsors willing to invest money and effort to grow that sport.

BK: The technology is ready, so the job now is to continue to show the added value it gives. Luckily we’re working with very talented people and companies who share our vision of the confluence between television and gaming.

GT: What are your future plans with IMR now that the Street Fighter V Invitational is over?

BK: We’re currently in the process of selling the IMR game show ‘Lost in Time’ – which we co-produced with FremantleMedia– to international markets. Lost in Time aired on Norwegian television this spring, and each episode follow three new contestants who battle it out in different time eras for a big money price. The viewers at home can compete on their mobile or tablet in the exact same challenges (logic, obstacle, driving and shooting) as the contestants on TV and win the same cash price as the winner on TV. This makes for a rich, immersive experience where viewers become active participants in the narrative. On average we had 30% interactivity throughout the season, compared to a market benchmark of around 5-10%.

In addition to that we’re working on more eSports projects, new IMR game shows, further sales of Frontier and a few projects we’re really eager to start talking about.

GT: Finally, any last words or pieces of wisdom you’d like to give our readers who are thinking of experimenting with IMR?

BK: It’s immensely fun, and challenging – just the way it should be when you’re trying to revolutionize television. Get on board sooner rather than later!