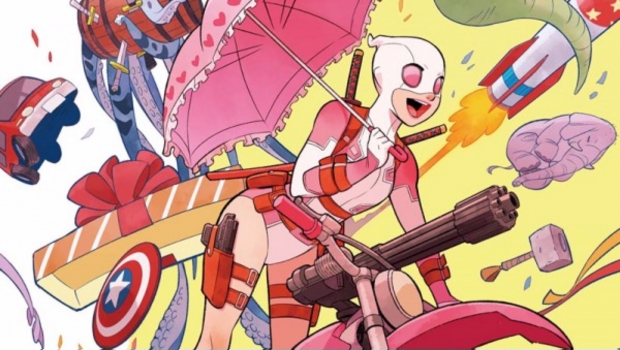 Making her debut in 2015, newcomer Marvel superhero Gwenpool has been making waves since her introduction as a variant cover for an issue of a Secret Wars tie-in. With her first ongoing series entering its fourteenth issue in April, we spoke with Christopher Hastings, writer for Gwenpool as well as creator of The Adventures of Dr. McNinja, about the comic as well as future developments for the character.

Gaming Trend (GT): Gwenpool’s first appearances were on a variant cover for 2015’s Secret Wars and then in backup strips for the first three issues of a Howard the Duck ongoing series. How did the current ongoing series come to fruition?

Christopher Hastings (CH): That one cover, the variant for Deadpool’s Secret Secret Wars 02 really took off in the fan community. It spawned a lot of fan art and to Marvel’s surprise, many cosplayers. Marvel recognized that this was a character a part of the fandom wanted to see exist in books, and not just as this costume design on a variant cover.

The Howard the Duck backups and the Holiday special was Marvel’s way of testing the waters with the new character before full on giving her a series. It was also a challenge to figure out how to make a character with that name and that costume make sense without being related to Deadpool or Gwen Stacy, to make Gwenpool her own new character that could stand on her own in the Marvel universe. Also she had to start off as a foil to Howard the Duck because that was the first book that made sense to try her out in. It was a lot to juggle at first, but once I had the idea that she was a normal person who knew she was in a comic book, the rest started to fall into place. Editors Jordan White and Wil Moss really helped figure out how to get her to fit into Howard the Duck.

Once that happened, I had some meetings with my editors, Jordan White and Heather Antos, and figured out the best arc to get her started, which was mostly about challenging her ideas about what it means to live in a “fictional” world. We thought becoming a henchman of MODOK would be a good way to do that.

GT: Gwenpool’s trigger-happy personality reminds me of your webcomic, The Adventures of Dr. Mcninja. What were your inspirations for the character and the series?

CH: The fun thing with Gwenpool is I can basically unleash all the commentary I’ve ever had on super hero comics, to the point where we can’t really fit all of it, lest we not have a story, but just a sequence of Gwenpool pointing at things and saying “That’s pretty absurd, huh”. So those influences are pretty broad across the history of super hero comics.

But her trigger-happy, responsibility-free thing, that very much comes from Grand Theft Auto. The people in the world look and sound real, but they’re not, so you can steal their cars and murder them all day long and suffer nothing for it.

GT: What is something that sets Gwenpool apart from most other comic heroes today?

CH: She subscribes to a different sort of truth than the other characters. In some ways, she sees a bigger picture than other heroes, because she knows they’re all just in stories, that their lives are illusions. But in other ways, she completely misses the point of them, and her assumptions are wrong.
GT: The series from the start has been something of a deconstructive story about a normal girl in a superpowered universe. How is this different from writing a straight up action comic?

CH: A character who doesn’t just break the fourth wall occasionally for fun, but has to ALWAYS do it because it’s their core trait is pretty challenging to write. It could get obnoxious really fast. So I’m trying to figure out ways to humanize it, make it part of a deeper character, or to figure out directions to take it that might be surprising.

And it is fun to deconstruct stuff, but you want to be careful not to break it entirely. I can’t have Gwenpool show up in the middle of Secret Empire or something and say “None of this matters because eventually a new creative team will be on Captain America and the status quo will be reset.” I mean, she COULD, but she’d just get blank stares from the other characters, and like I said, that can get old very quickly.

GT: Of the supporting cast of characters, who’s your favorite?

CH: Batroc the Leaper, easily. I love taking a well known goofy joke of a comic villain, because that’s Gwen’s perception of him, and then making him sympathetic. It is a little sad to know that when he leaves our book and goes in someone else’s, he just becomes his old cartoon bad guy self again.

GT: Gwenpool’s starting to show up all over the new Marvel universe (guest appearances in Champions as well Rocket Raccoon and Groot come to mind). Is she going to be a key player in any upcoming series outside of her own?

CH: Not that I know of. Ryan North and I are pals and we occasionally talk about bringing Squirrel Girl characters into Gwenpool and vice versa. But I doubt Gwen’s joining the Defenders any time soon.

GT: The Deadpool appearance in issue 13 was basically the moment the fans were waiting for. Will we see more of this fourth wall-breaking duo in the future?

CH: I have no plans right now, but I really enjoyed writing that appearance, so I hope to come up with another excuse to get them back together. When I started writing that two issue story of Gwen stuck in a D&D dungeon, Deadpool wasn’t part of it at all. But once I realized he could be the “dungeon boss” I pleaded with my editors to let me do it. This is why we have this huge Deadpool appearance in a story, but he doesn’t appear on the covers or in the solicits, because I came up with it kind of last minute. Very exciting and fun for the story, but terrible salesmanship on my part.

GT: Will we ever find out more of Gwen Poole’s backstory? Her meeting with Dr. Strange did open a lot of narrative possibilities about how she entered the Marvel universe.

CH: Why, I’m working on that story right now! Our next arc, BEYOND THE FOURTH WALL gets into the time before Gwen entered the Marvel Universe, and reveals some things we’ve been teasing at occasionally.

GT: You’ve also worked on Boom’s Adventure Time series; how different is the environment with comic publishers as opposed to something like an independent webcomic like Dr. Mcninja?

CH: The collaboration is the biggest thing. Having editors to help you tell your best story possible is huge. A lot of people love that Gwenpool reveals that she never mentioned Deadpool before their meeting because she just didn’t like Deadpool comics. That was Jordan White’s idea! I was happy to run with it. I pitched a different reason that I can’t really get into because it deals with an upcoming arc, but what we went with was way better.

And the artists I get paired with are SO GOOD. I was working with Ian McGinty before I left Adventure Time, and I loved what he would do with my scripts. He totally got the humor, and blew it out even bigger. Gurihiru is the same on Gwenpool. They see what I’m trying to do, and just make it bigger and better.

Drawing my own comics on Dr. McNinja, it was nice to have total control over the storytelling, and it’s why you’ll never see a comic someone else draws that “reads” quite the same as when I draw it. But often times it’s been worth giving up that control to hand over to someone who knows better. Occasionally it does make for a comic where there is some story lost in the steps, I’ll admit. But usually dialogue polishes can fill in the gaps.

GT: Finally, are there any last words for our readers that want to get into the comic business? What’s next for the Gwenpool ongoing?

It’s easier to break into comics than ever, simply because there are no barriers to publishing your own work. You’ll hear this from anyone who’s started in webcomics, because it’s true. I broke into the comics business when I put my first page of Dr. McNinja onto a website, and some people started to keep reading it.

So if you want to make comics, then make comics. Make them every day, it’s the only way you’ll get decent at it. Find other people who make comics and be friends with them. And then you’ve got your work and your community, and hopefully that is fun and satisfying for you! Hopefully you find an audience, and you might be able to make some money making those comics. And then that cycle just continues.

In the immediate next couple issues, Gwen tries to find a way to bring Cecil back to life, but runs into trouble with Ghost Rider and Hawkeye. After that, the series takes a pretty insane turn with the start of Beyond the Fourth Wall. I can’t wait for people to read it!

The Unbelievable Gwenpool #14 will be available on April 12. You can follow Christopher Hastings on his website or his Twitter. Check out our review of the holiday one-shot, and stay tuned for more news on Gaming Trend.