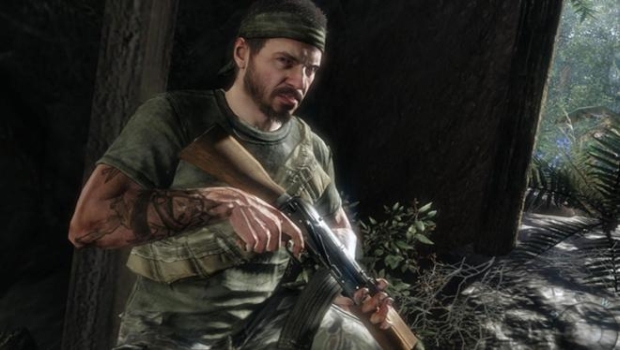 Hah… it’s more about what draws them to me to them. Seriously, I have a great job. I am just doing what I did as a little kid…playing army. It’s fun to handle weapons and act like a badass, especially when no one’s really shooting at you!!! I am also very fortunate that I played team sports as a kid and was able to transfer a lot of those lessons to what I do as an actor. Again, I love my job!

2.) How did you end up hooked up with Treyarch for the Call of Duty series?

They were testing a new “performance capture” technology and needed an actor that had weapons and stunt training. I auditioned and got the gig. They liked me and later hired me to play WOODS…the rest is history.

3.) What’d you enjoy about your time as Frank in Black Ops I and II? Are you much of a gamer?

I’m not much of a gamer. I’m just too bad at it and too busy to play enough to get any good. As far as being WOODS, I enjoyed all of it! Everything from the quality of the people I get to work with to the great fans I get to meet. It’s an awesome gig, and the lunches were pretty great too.

4.) Damn it! I was speaking at SXSW when your movie was released. Sorry I missed it. Tell us a little bit about Coldwater. What’s with people casting you with the name “Frank”??

Actually the movie opens on the 15th of August in the U.S. so there is still time!!! Also, we’ll be on Cable VOD and iTunes. Ok… Coldwater is about a juvenile rehabilitation facility run by a retired Marine Colonel (Me!). A young man is sent against his will to the camp. The story follows the “tough love” slowly as it descends into abuse and chaos. Any more than that will take away some of the films impact.  You can pick it up on iTunes here.

And the FRANK thing… YEAH?!! I mean, c’mon already…its like 10 roles now that have me named FRANK!!!!

5.) Call of Duty isn’t the only game under your belt – you are also cast in Deep Down. Can you clue us in a little the character you play in that upcoming game?

I play THE WARRIOR. His name is Frank. Just kidding! I am the knight who battles the dragon, which is kinda cool. It’s WOODS in the middle ages….go figure!

6.) You’ve been an actor, a producer, a cinematographer, and even a camera operator – what do you like doing most, and which of these jobs were the most challenging?

I’m also about to direct my first film. Honestly, it’s all very similar. It’s all filmmaking… you make something out of nothing. It’s making ideas come to life. The job you do is your access point to the process… I love it all.

Free time? What is that? I love the business. I have been blessed to be able to support myself by playing pretend.

8.) Your roles seem to gravitate towards the military life – did you serve?

I did not. I was recruited to go to West Point. There are days I wish I had, but in all honesty, I was not mentally disciplined enough for it at the time.

9.) What’s your biggest challenge doing voice work? Did you get to climb into the vocap suit and do the whole deal?

The performance capture is pretty much the same as working in a movie or on TV. The VO booth is another animal all together. The hardest part was the screaming for the battle chatter…each session shredded my voice.

10.) You’ve been in the entertainment industry for 15 years. What changes in the industry have surprised you most.

Hmmm… Two answers: 1. Nothing has changed really, 2) But everything has changed. Just like all other businesses, one has to adapt and adjust. One must evolve are perish. The requirements of the job are the same; You still have to hit your mark and say your line, you have to be good at your job, be nice and don’t steal shit. What has changed is the tech; anyone with an iPhone and a Computer can make a movie. YouTube and reality TV can make stars out of people who were once misfits. Netflix and Hulu have allowed people to watch what they want when they want. It has caused havoc in how studios and producers make money. Which mean it has changed how actors, writers, directors and crew make their livings. It is not a business for the weak or timid. The onset of technology has raised the bar for everything, and you need to be savvy in all areas of this business now.