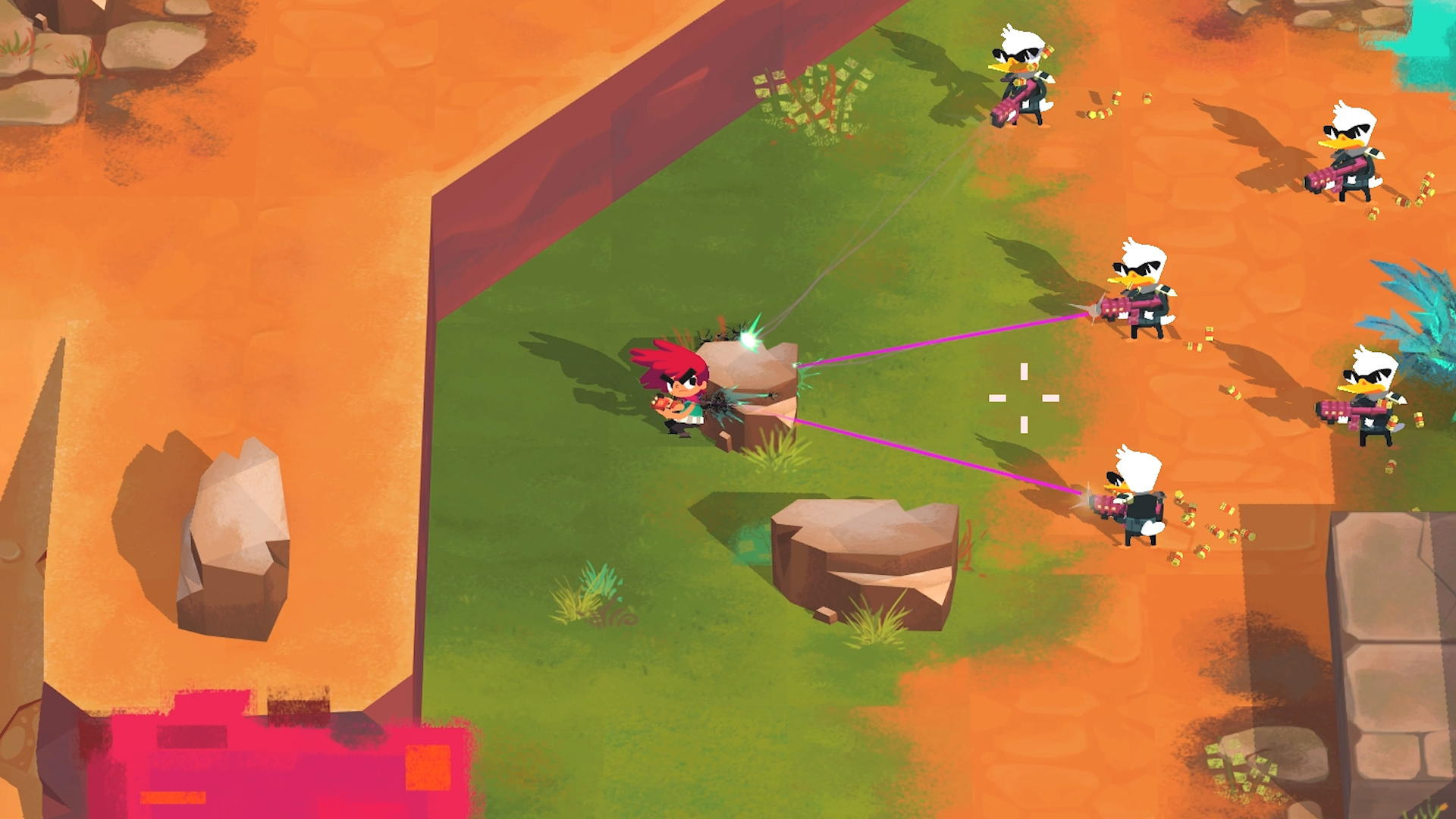 Kickstarter made the most sense to us as a way to both fund the game and provide it with some early “super fans” that can help us guide the design to the right direction.

Relic Hunters Zero was very much a community-driven game. We developed most of it with our fans, with open source code and a “100% free” price tag. Players really took to it, we had over a million of them, great user reviews, lots of mods, fanarts, the works.

We also had a great experience with Kickstarter in Chroma Squad. I still talk with some of our backers on a weekly basis, and development was just so much easier with that constant player feedback on what we were doing. I think the game benefited immensely from that.

With Legend we want to bring fans into the process as soon as possible. At Rogue Snail we are also a much leaner team and very efficient with how we spend money – the funding from Kickstarter will go a long way into keeping us independent and focused on making the game.

What was your main inspiration for the style of the Relic Hunters universe?

Relic Hunters was born out of a game jam – the first and only one I didn’t complete. Betu and I were doing this small shooter for Epic Game Jam when I got sick – since I was the only programmer, development came to a halt. We were having so much fun, though, that we decided to take the next weekend to keep developing it, even though the game jam was already over. And then we took another weekend. Then another. And the rest is history, I suppose! Haha!

So the game has this very “jazzy” nature, you know? It’s very spontaneous. Betu and I were inspired by things that we loved and that were natural of our own style of work – he brought bright saturated colors, hard angles, and a quasi-Japanese vibe; I brought my obsession with shooter combat “feel” and flow, some original Legend of Zelda references, and a love of the Halo series – with the regenerating shield, homing projectiles, intricate but predictable AI behaviours, picking up weapons from the enemies, that kind of thing.

For the new game, Relic Hunters Legend, we’re going all out on the “online” and “RPG” aspects. It’s being built for online co-op from day one, and we are going deep not only on the “stats and loot” portions of the game, but also on character-driven story and worldbuilding.

The webcomic is a tie-in to the videogame. Will that be setting up the events of Relic Hunters Legend, or will both be telling the same story side-by-side?

Yes, the webcomic tells the events that happened before the story of Relic Hunters Legend. The first 3 issues show how the six original Relic Hunters got together and decided to fight the Ducans, and our plan is to keep expanding on this origin story, and hopefully jumping even further in time to dive into each character’s past and motives.

Speaking of which, how did you initially envision Relic Hunters? Did you start out with an idea for a game and created a webcomic for it after, or did you always intend to expand the universe?

Relic Hunters was a very spontaneous game from the beginning, so we never really planned for it to grow so big in scope. When we decided we were going to make Legend, however, we already knew we had to expand the universe, so the comics and animation series were designed to tell the stories that are outside of the scope of the game.

The animation in Episode 0 was wonderful as well, are there plans to continue it alongside the game and webcomic, or are we expecting to see a shift in focus primarily to the game?

Thank you! And yes, we want to make a full series of mini-episodes, from 4 to 10 minutes each. Animation takes a lot of work, though, so how fast we put this out is going to depend on the success of the Kickstarter and of the game in general.

Even though I have personally co-written and co-produced the episode, the team that works on it is not the same as the game team – it’s a badass animation studio here in Brazil called Copa Studio, who do a lot of great work and are currently on the second season of their Cartoon Network show “Jorel’s Brother”.

It was amazing working with them, and I think it’s safe to say that both parties are eager for that partnership to continue for a long time!

Relic Hunters feels like something I would have definitely paid for to experience. What made you decide to go the free-to-play route?

It wasn’t a tough decision, actually. We are pretty confident about going Free-to-Play, for a few reasons.

First, Zero was already a free game (although with no microtransactions at all!), and we didn’t want to alienate some of our existing fans. Free is just so democratic! It allowed Zero to be played in dozens of countries, and by people who normally wouldn’t be able to afford games. We want to keep this accessibility with a free game and low minimum PC requirements.

Second, online games need people to play! Indie multiplayer games, even some really good ones, are bound to suffer from a population problem eventually. We *could* release the game with a price tag and then switch to Free when this becomes a problem, but I don’t think that’s fair with player. We’d rather plan for Free from the get-go and be honest and transparent about it.

Third, we think that Free-to-Play can make as much money as Premium without requiring any underhand or exploitative tactics. We are very serious about making an honest, fair and fun Free-to-Play experince, and we even released a Manifesto about it: http://www.roguesnail.com/relic-hunters-f2p-manifesto/

The game is promised to be free forever, but are there any plans for any paid content?

The game will be supported by microtransactions, of course. But there will never be content that is exclusively “paid” content. Everything will be achievable and accessible to all players, regardless of how much they spent in the game.

We will work with our community to figure out how to best monetize the game – and by “best” we don’t mean “to make as much money as possible”, but to figure out a way that generates healthy revenue and keep the game updated frequently – and at the same time keep the game honest, fun and engaging for all players. We believe this is a very achievable goal.

Relic Hunters’ world draws from many different sources, from Star Wars and Bravest Warriors to Firefly and Anime such as Kill la Kill. We are also inspired by our own home country, Brazil. The city hub where your adventures begin is called “Hilltown” and it is directly inspired by Rio and its communities, most notably the “Dona Marta” community. The authoritarian and information-controlling regime of the villain Duke Ducan, and the naiveté and resourcefulness of the people living under it are directly inspired by our political history.

Playing Relic Hunters Zero, it definitely feels like adding another player is just the thing it needs. Is this something you’ve thought about before Legend?

We didn’t have to think about this, honestly – the community made it very loud and clear! Haha! Hardly a week goes by without someone messaging me about multiplayer on Zero. It is by far the most requested feature from our fans, and we are happy to finally be able to deliver it.

You’ve been great with the community, with taking feedback, supporting the game for nearly two years, and now allowing Steam Workshop for Relic Hunters Zero, are you hoping to support Relic Hunters Legend in a similar fashion and if so, what sort of content can we expect in the future?

Yes, definitely. We are not even close to being done with Zero, as well. Two years ago we promised “Free forever, updated forever”, and our current roadmap is to keep investing in deeper Steam Workshop support, as that turned out to be an amazing source of content for the game.

As for Legend, this is a 5-year game for us, at the very least. If it runs out of money eventually, we’ll just give our fans the server code so they can host it themselves. We want this game to be enormous, and we are building the tools for it. We also want to add Steam Workshop to it down the road as well. We might be small, but we are tenacious, and slowly but surely we get there – just like a snail, I guess! Haha!

Relic Hunters Legend’s campaign has been launched today on Kickstarter. To learn more about the title or to see Rogue Snail’s other games, visit the official website.