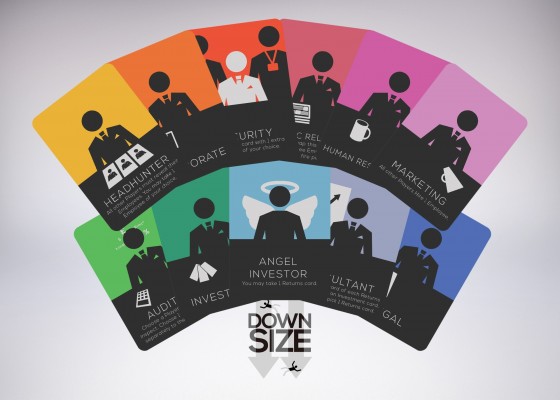 Gaming Trend Editor-in-Chief Ron Burke sat down with Lewis Shaw, the creator of a Kickstart-in-motion called Downsize to find out what this corporate greed simulator is all about.  The game is nearly half funded and has only been live for a few days, so we had to find out more.

My name is Lewis Shaw, and I’m a full time writer. I make up words and sell them for a living, so doing the same with the games that I love to play seemed like a logical next step.

Meet Lewis Shaw*
*not to scale

– What’s the gist of Downsize?

Downsize is a business game, in the sense that The Apprentice is a business show: it may not be the same as the real thing, but it encapsulates all the same themes of greed, corporate culture, screwing over your rivals, and ruining the lives of the people who work for you.

– Walk us through a typical round.

Players take control of a big soulless corporation – represented by a myriad of colourful employee cards. The only way to get things done in the game is to fire different combinations of department – Corporate, Legal, Investments, etc – to resolve pre-defined effects.

The fact that you can do multiple different things with the same hand gives a lot of room for strategy, but most often you want to make investments, keep your rivals busy, and then ‘downsize’ (that’s the name of the game!) before the market crashes.

– It looks like there is some real depth behind the simplicity of Downsize. What are some strategies you’ve seen during testing?

The most obvious is the one most people try first: make a lot of investments, then worry about what comes next. Of course, when everyone does this – and they often do – it sends the market plummeting, and the more at risk everyone is of taking losses.

I’ve seen people try to be diplomatic, or take sides, or straight up lie about their cards – anything goes. But the most common thing I hear is: “Can we play just one more time? I have an idea.”

A cross-section of some of the cards in Downsize

– The top tier of stretch goals offers up a 20 card expansion. Can you give us a little preview what that might look like?

It goes without saying that the world of business is a bit more complicated than a 90-card game can encapsulate. The Market Movements expansion expands on some of the advanced sabotage a company can employ – smear campaigns, protests, industry inquiries, etc – whilst retaining the same level of simplicity that makes the game so fun.

To add a level of suspense, the sabotages that could be employed each game are available to everyone – think Russian Roulette, but you know what chambers are loaded, and anyone can pick up the gun.

An example of card effects in Downsize

– I’ve gotta ask — have you ever been a manager?

A lot of people have asked me if this has been inspired by the places I’ve worked! I’m glad to report that the answer is no – I’ve had the pleasure of never working for a maniacal downsize-happy CEO… yet.

– In your video you mention that, as the profit cards begin to disappear you can use specialty cards (e.g. Lawyer, HR, etc.) to squeeze other players. How’s that work?

Specialty cards, as the name suggests, are rarer, and offer unique abilities when fired: rifling through someone’s accounts with the Auditor card, or stealing employees with the Headhunter card. They add a nice level of unpredictability to the game. If people want to get a sneak peak at them, I’ll be theming each Backer Update on the campaign to different cards…

If you’ve suffered under the yoke of Corporate Masters in your life, it’s pretty easy to see how this game can be morbidly fun.  Hit the Kickstarter campaign and help get it across the finish line!