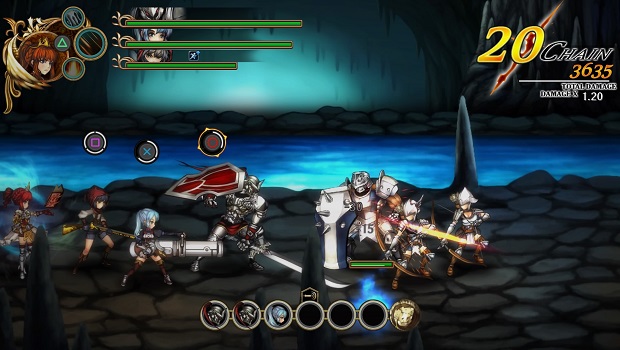 Set to be released on July 25, Fallen Legion: Sins of an Empire and Fallen Legion: Flames of Rebellion aim to flip the script of RPG stories for PlayStation 4 and PlayStation Vita. We got to speak with Spencer Yip, director of the Fallen Legion games as well as the founder of gaming news site Siliconera, to talk about the development process as well as some other decisions regarding the project.

Gaming Trend (GT): So you’ve been working on the Fallen Legion games for three years now. How did you decide on making your dream project?
Spencer Yip (SY):I’ve had elements of Fallen Legion kicking around in my mind for years. I love the intensity of combat in action games, seeing a changing world in RPGs, and making decisions in visual novels. Fallen Legion marries these elements and we created a game where the stakes are always high.

As a hobby, I worked with game development tools and brushed up on programming. The more I did this, the more confident I became and started to think – hey, I might be able to make this thing! Then I was lucky enough to have support from my friends and the talented team at Mintsphere. We all worked together to develop Fallen Legion.

GT: Fallen Legion: Sins of an Empire and Fallen Legion: Flames of Rebellion are two games that share a similar battle system yet are remarkably different in story. What makes both games distinct from each other?
SY: Both Fallen Legion games have a fierce battle system where you simultaneously control four characters. While you’re slashing manticores, you can also block enemy attacks in real-time and can parry an attack or reflect a projectile with a well-timed block. While the combat system is the same, the stories are entirely different.

Fallen Legion: Sins of an Empire for PlayStation 4 follows Princess Cecille who is on a quest to restore glory to her crumbling kingdom. In the beginning of the game, she learns her father has passed on and receives a magical talking grimoire from her mentor, Maurice. While she reluctantly takes on the role of Emperor, her former ally Legatus Laendur makes a claim for the throne. You play as Laendur in Fallen Legion: Flames of Rebellion on PlayStation Vita. He comes from a land that was absorbed by the Fenumian Empire and believes as Emperor he can reform it. We designed both games to be standalone titles and each game has unique levels, bosses, and story branches.

GT: One of the unique features that this game offers is that every choice you make within the game shapes the kingdom ever so slightly (or monumentally). How do you think player choice affects the development of a game like Fallen Legion?

SY: We designed choices so each time you play Fallen Legion the game will lead you on a different path and wanted to create story branches that hopefully surprise players. There are some routes that are uplifting and others that are… less so. After creating all of the branches I went back to calculate the probability of players finding these routes and we went back to rebalance that a bunch of times. It was definitely a challenge to do!

GT: The combat system seems comprehensive and overwhelming at times. How does the choice system complement the gameplay mechanics, and were there any difficulties in balancing the two together?

SY: Between battles you make choices that give your party power ups and change the world. Will you align with a warmongering soldier for a strength buff or take away funding from a hospital to revive a character before a boss? One of the tenets of our game design was to create these kinds of high pressure situations for players.
The power-ups last for a level and change each time you play a level. Players can also unlock additional power-ups such as new spells or setting enemies ablaze after a perfect block depending on the choices they make too. Fallen Legion has so many possibilities the only way we could balance the game is by playing it a ton of times and when we had to decide on balance we thought about what would make the game fun first. If something felt fun or cool, it stayed in the game like a one-use item that allows you to do unlimited deathblows (our game’s special attacks) for a couple of seconds.

GT: Fallen Legion’s artwork is entirely hand-drawn. How does this change the game’s atmosphere compared to, say, digitally created artwork?

SY: Fallen Legion’s digital paint style gives it a whimsical storybook look which adds to the game’s fantasy setting. From a design perspective, using hand drawn artwork gave our artists the ability to see their creations from concept to how they appear in the game. Leon, Fallen Legion’s lead artist, was able to add details he wanted to see directly onto characters himself. We mixed that technique with skeleton animations, something you would see in a 3D game which allowed Dedee, Fallen Legion’s lead animator, to quickly tweak how enemies and characters attack.

GT: What was your favorite part in being involved with this project?
SY: Everything! I’ve been working nonstop on Fallen Legion – seven days a week often till the sun rises. While the hours have been long, it is very satisfying to see the game improve bit by bit and players enjoy it when we showed it at events like PSX. I’m really proud of our team too. For many of us, this is our first game and seeing everyone pour their hearts into making Fallen Legion fueled me to work even harder. When the game is finally out I’m looking forward to seeing streams with crazy combos and players discussing the story choices.

GT: Aside from directing Fallen Legion, you’re also renowned as the founder of Siliconera. How does it feel having roles in both games media as well as game development? (in other words, how has your perspective on the gaming industry changed?)
SY: Renowned? Wow, that’s way too big of an honor, but thank you! On the press side, dabbling in development, even just a little bit, gave me a broader perspective as a writer. As I got more involved with game development I got to have deeper conversations with game creators when I did interviews. I remember I was talking with the I am Setsuna team about game optimization and they were pretty surprised when I started talking about object pool optimization. That led to a great interview.

GT: Are there any games you’ve been recently playing or would like to recommend?
SY: As a fan of NieR and the Persona series, I have to give a shoutout to NieR: Automata and Persona 5. Wild Guns Reloaded is a couch co-op favorite. There’s also this horror game called Detention on Steam that really impressed me. It has a fantastic story that takes place in Taiwan in the 1960s and does such a good job setting up its atmosphere.

GT: Finally, any last words or pieces of advice for our readers? Maybe some for those that would like to one day get a career in games journalism or game development?
SY: The key to being a better creator is to keep creating! Don’t worry if your work isn’t perfect, it probably won’t be at first, but you’ll get better each day when you learn from making mistakes. If you want to be a game journalist take some time to write each day. This is how you will find your voice and get better at explaining your thoughts.

Getting into game development can feel overwhelming, but I would take similar small steps. Start by tweaking how a character works in an existing game, making a mod or designing a level in Super Mario Maker. Then show it to a friend to see if how they react. Their reaction might surprise you! Some games like Civilization IV have publically available source code and I would try breaking one of those games to get a grasp of a game’s inner workings.