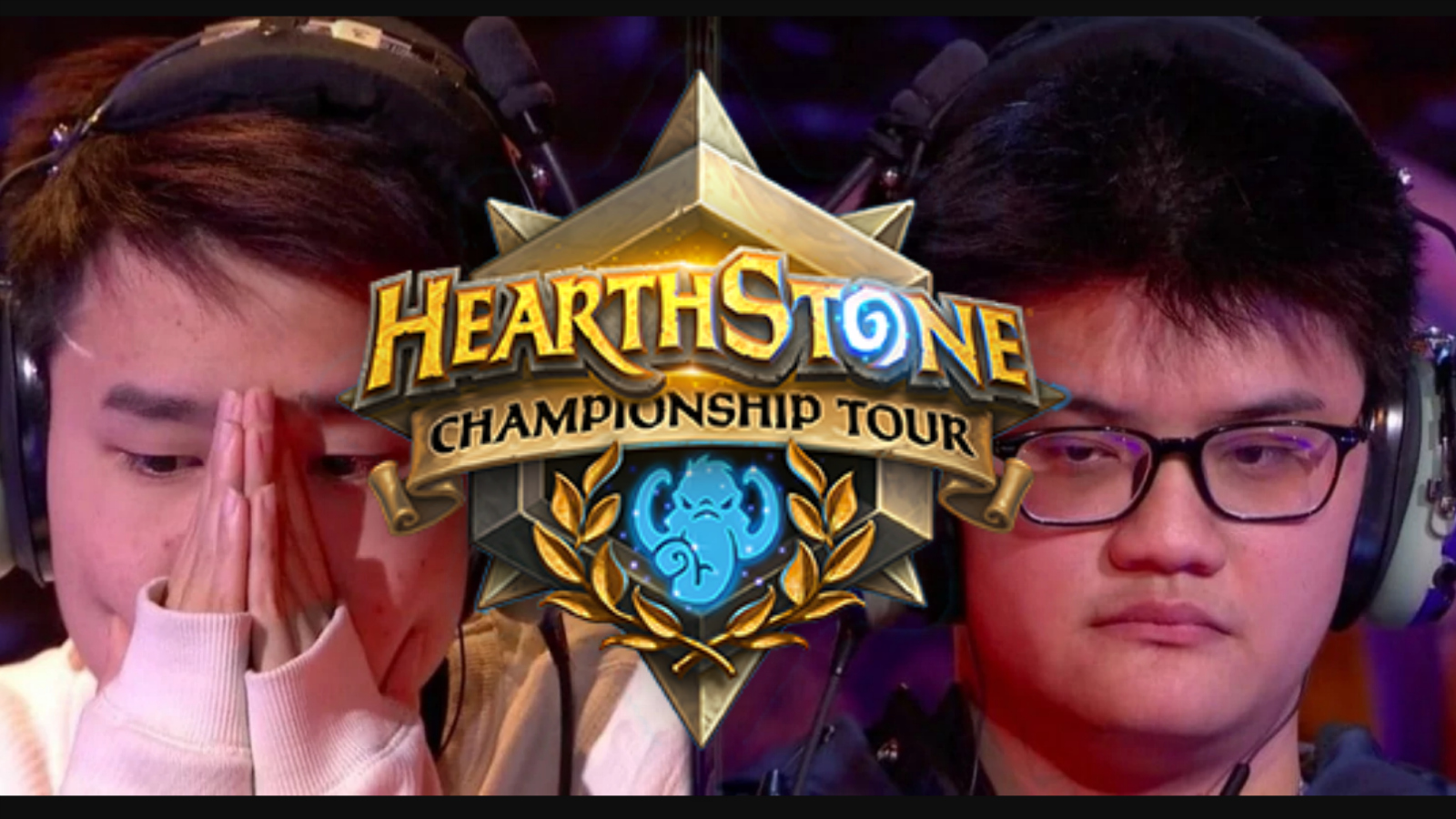 This year Blizzard took its Hearthstone Championship Tour on the road, and it’s never looked better. Since last year, the Hearthstone esports team has broadcasted from the Bahamas, Shanghai, and Los Angeles, leading up to this weekend’s final 2017 HCT series hosted in Amsterdam. During this event’s live broadcast, the game board zipped side to side on viewers’ screens, making way for standings updates and statistics, player statistics, and dramatic close-ups. Card draws were met with gasps and cheers from a live audience, reflecting the emotions of over 150 thousand viewers watching at home. Hearthstone has always been a highly watchable esport, and now its broadcasters are matching that natural fit with commensurate delivery.

Behind these new broadcasting tricks—and the entire process of organizing these events—are Hearthstone’s Esports Franchise Lead  Che Chou and Esports Manager Matt Wyble, who took time out of their very busy weekend in Amsterdam to speak with me about how they’ve been running their show. On top of discussing their experience hosting these festival-like Hearthstone events, meeting fans all around the world, and contending with the struggles of travel, Che and Matt explain how they came to upgrading Hearthstone’s broadcasting quality: with a lot of “blood, sweat, and tears,” and a little help from the executive producers of the World Series of Poker.

You guys are calling from in the midst of the Hearthstone Championship Tour, which has touched down in the Bahamas, Shanghai, California, and now Amsterdam. How is the tour going so far?

Che: I think from an esports side, a lot of planning and…passion went into this project. It’s our first world championship away from the comforts of Blizzcon, so…a lot of thought went into the event. It’s going great. I think what’s most magical about this place in Amsterdam is the venue that we chose. Super happy so far with how everything turned out in the event scale [sic] and I think—even more important—we’ve had two incredible days of really good matches and stories just with our stats field of amazing players here. Tomorrow we go into a day of really…nail-biting elimination, and then Sunday is championship Sunday.

Considering being “away from the comforts of Blizzcon,” the show has looked great so far!

Matt: I think there’s a lot of credit there to Che’s team and everyone that’s been working on this event. This is our fourth pinnacle event for the Hearthstone year; we went to the Bahamas in the winter, then we went to Shanghai, Los Angeles, and now here in Amsterdam, and at each one of those events we really pushed ourselves to try a lot of new stuff, and to get better really rapidly. It’s been great to see this event—this event I think is kind of putting all of those things that we liked most about each of those separate events together for the first time.

On the ground here…obviously the centerpiece is the esports action, which has been, like Che said, really fun and amazing, but it also just feels like a festival; you can play in side events, you can meet developers, you can talk to influencers, you can meet the casters—you can do all these different things, and it’s got a great vibe. I got out a little bit today and got to meet fans and hang out for a little bit… It feels like Hearthstone [laughs]. It feels like being in the Tavern.

Che: One thing we try to approach, you know, our esports events for Hearthstone, has been to adopt the franchise approach, which is…the tournament is really just one massive Fireside gathering. It’s a summit of like-minded Hearthstone fans who want to get together and watch the highest level of play possible, but also to geek out with their friends in Hearthstone and meet new friends… One of the things we’re doing to give you that sense of atmosphere… there’s the main hall, you can watch Hearthstone matches there, and it’s all set up with tavern seating, and it’s all very social; and then we have this whole separate hall which we’re calling the Tavern, and it’s got rows and rows of tables for people to play swift tournaments that we’re setting up for the audience… Again, it’s all to create something bigger than just the expectation of “Oh, it’s an esport, I’m gonna come and just sit around and watch things.” No, you’re going to come and you’re going to interact and get pulled into the world of Hearthstone.

We have to get some of that out in New York!

Che: Yeah, we would love to do something in New York, right in the city.

Hearthstone has had a presence as watchable content—through esports, streamers, and the like—since its beta. What did it take to get to this point for Hearthstone as an esport with a strong following of viewers and participants?

Matt: I think it took a lot of blood, sweat, and tears, to be honest [laughs].

I think because it’s such a different game than a lot of esports, we had to make a lot of our own rules. There’s lots of things we’ve learned that might work for another esport that we had to build for ourselves from the ground up. We also really try to focus on quality, similar to how Blizzard approaches making games. Every time we host an event, we want it to be better than the last one; every time we put on a broadcast, we want it to look better, feel better, and be more entertaining, have better stories come out of it, have better explanations of the plays; we’re really trying to just continually improve every time. We have a lot planned for this year, whether it’s a lot more support for teams in Hearthstone, or if it’s the Hearthstone Masters System, which is gonna create a whole new system for our top players to be rewarded for consistent success for the game. Each year we go back to the drawing board. What worked? What didn’t? What do we want to add?

To be honest, we had pretty ambitious goals for a lot of those things. For a couple of years we were year-over-year adding three times as much content, just to give you a sense of how quickly we were ramping up and how much we wanted to invest in this because of how excited we are about Hearthstone.

You mentioned before that you’ve been pushing to “try a lot of new stuff” with this tour. What kind of new stuff?

Che: To talk about 2018, we have to talk about 2017, which was kind of the year I kind of cut my teeth on at Blizzard. I mean, that joke when you said blood, sweat, and tears, I mean literally…maybe not as much blood, but definitely—

Matt: [Laughing] Plenty of sweat and plenty of tears!

Che: [Laughing as well] You know, I think it was a very ambitious year for Hearthstone esports… In 2017 we took on grand experiments, like… previous to this, besides Blizzcon, Hearthstone broadcasts and tournaments were mostly studio affairs… we didn’t have the chaos of live events, a consumer-facing one. But we said “Hey, let’s take this show on the road and let’s invite people to come watch. Let’s create an experience for the [Hearthstone] audience.” So in those very early days, like November ‘16, it was like okay, if we do that, then these events have to feel like mini festivals or awesome Fireside Gatherings. So there was that challenge. Also, we just didn’t know about taking 100+ people crews on the road to do shows. It was obviously very rewarding, but also extremely challenging. I think we learned a lot of stuff that, probably, money couldn’t pay for. It was invaluable.

We also knew that we wanted to upgrade the broadcast quality of our tournaments. So Matt and Team 5 said “Who are the best people to tell the story of players who are really good at card games?” Well, they went straight to the source and got the executive producers who worked on the World Series of Poker. It was like, spare no expenses, just go do the thing that we have to do to upgrade this thing. That was super interesting. We learned a ton from our partners at 441 Productions about what they do and what the best practices are. So we learned a lot about broadcasting and storytelling.

We also spent a lot of time in 2017 listening to the community. I think that’s one thing that Blizzard fans and, especially, Hearthstone players are really good about, which is vocalizing their love for the game, but also their feedback on what could be better. So we did a lot of intentional listening to a lot of our top players, as well as, you know, on the backend we pulled a lot of data on how our players are moving through the system and qualifying for playoffs. We basically came out with some takeaways that really informed how we thought about what we needed to do for 2018. Those things basically turned into things like the challenges system or the Masters System or better prizing.

Matt: Yeah, I think 2018 is more about… we learned a lot really quickly about prime event management, premiere broadcast quality, flying people around the world, aligning with the expansion calendar—all these huge, huge things that we sort of, without knowing what we were getting ourselves into, signed ourselves up for. We learned a ton [that] year, and this year, I think, we were really able to polish that, things like the Masters System and other things we wanted to refine.

Like you said before, HCT has taken you to the Bahamas, Amsterdam, back to the U.S., and all around the world. What has it been like meeting players and competitors from around the globe?

Matt: First of all, it’s humbling and very exciting… I think for us, especially for Hearthstone, it’s been really important to have events in different places because we have fans all over the world; we’re not an esport where all the talent is concentrated in a specific region or country. We have great players on every continent in dozens of countries.

Che: I think Hearthstone is a game that has something for everyone. Obviously, competitive Hearthstone is—there’s a sub-community within that. One thing that I’m really pleased about seeing over this past series is the momentum of growth of that sub-community within Hearthstone. Lots of people watch Hearthstone esports… but this year I started to see the emergence of certain sub-communities that are very focused on the stories of Hearthstone esports, the players, following their stories, discussing really specific breakdowns of matches that have happened, dissecting each of the plays… that, to me, is—that’s what a sport means, right? We’re sort of building the community for the sport of Hearthstone. Fostering that, seeing that grow this past year has been really amazing. My hope is that 2018, with all of our introductions of new things and doubling down on those areas, we’re going to see continued growth in that community, and I believe live events are an important part of that.