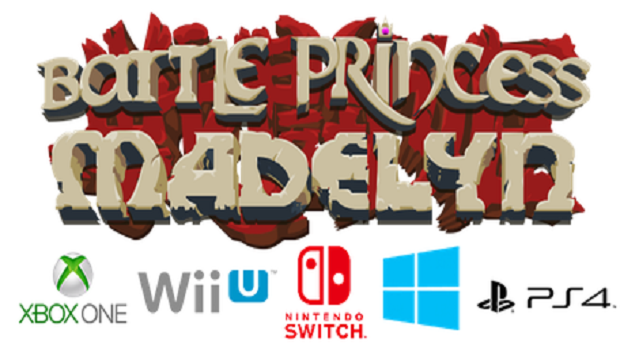 Smashing its original goal of $60,000 CAD in just five days, Causal Bit Games has created a successful Kickstarter for its upcoming game Battle Princess Madelyn. We talk with Creative Director and CEO of Causal Bit Games Chris Obritsch (assisted by VP of Causal Bit games Daven Bigelow) about the project, its inspirations, as well as the developer’s partnership with Limited Run Games.

Gaming Trend (GT): So Battle Princess Madelyn’s story was written by a children’s author. What was the inspiration for the story (as well as the project as a whole)?

Christopher Obritsch (CO): It is indeed being written by a children’s author, and it’s being inspired by many things. Maddi [Christopher Obritsch’s daughter] will occasionally chime in and tell us what she needs done with the story (where she wants to go as far as levels are designed) and we work around that. The very heart of the story is based on events and a story that happened to me as a child – bad times when my dog met a hunter unfortunately. The Black Cauldron is one story we draw inspiration from as well as The Princess Bride. The story itself will be quite original and will constantly pull at your heartstrings.
GT: Ghosts N’ Goblins seems like the main gameplay element here. What makes Battle Princess Madelyn different from the rest of the games in its genre?

CO: This game really pays homage to a plethora of 2D platformers, although Ghouls ‘n Ghosts is the primary attraction factor we actually take some elements of Wonder Boy 3: The Dragon’s Trap, MegaMan and Duck Tales in an interesting way too (see if you can spot some of it in the Pre-Alpha). Alongside the overworld map and free level selection of unlocked stages, we think this will remind players of many of the games of their childhood, or interest new gamers in playing some retro titles! However, Battle Princess Madelyn is much more than the sum of its parts, as there’s many great ideas that Maddi comes up with which I can’t say I have ever heard before, and they’re definitely going to be fun-filled for players young and old alike!

GT: Going back to the Ghost N’ Goblins inspiration, will this game retain the same bone-crushing difficulty, or will there be more accessible difficulty options available?
CO: The difficulty is a great question because it will actually be flexible by default; play well and the game will up the challenge, or if you’re struggling it will tone it down a bit. You can still lock the game in on “Casual” and “Arcade” difficulties though, which will replace the difficulty A.I. with either a laid back (young audience friendly!) play-through, or a hardcore classic mode, complete with game overs instead of restarting at the first stage!
GT: You’ve spent a few months working on the pre-alpha before ushering in the Kickstarter. What kind of issues did you run into when creating the Kickstarter?

CO: Well, the reason why we put the effort in beforehand was really to make the Kickstarter as smooth as possible, we wanted players to know what they were getting into by distilling the feel of the game into a 1-level (5 stage, 3 main and 2 hidden) first chapter to build confidence without giving away too much of the full game’s secrets and features ahead. Perhaps instead the hardest part has been securing physical copies, but the excellent Limited Run Games have been working hard together with us to bring the game to PC and PS4 for sure, and we can’t wait to see what’s coming ahead!
GT: How do you feel that crowdfunding sites like Kickstarter have benefited independent developers?

CO: Kickstarter and crowdfunding is one of the best ways for a designer to preserve their original vision without sacrificing too much creative control or ownership over their intellectual property. Publishers who own studios, and notably the AAA industry as a whole, are designed to consistently make money, so they can’t afford to stray too far from the trending games, eg: mostly 3D, open world and FPS genres or MMO’s, and that’s okay because there’s a big market for them! But when it comes to independents trying to make (relatively) big games like ours, and the many other great games that have come and gone through Kickstarter, there’s still a cost involved in developing and releasing them and it’s crowdfunding that helps make these things happen. The added benefit of Kickstarter is that it’s a social platform, and lets the consumers vote with their own money on what they want to see made and released, and of course also what they don’t want. The Kickstarter gives developers like us great exposure to audiences, and the backers get exclusive rewards and copies of the game in exchange for their help in making the game come true!

And this is only five days in!

GT: The Nintendo Switch is a relatively new console, so how was porting to the system different from an older console, like the Wii U?

CO: Thanks to the Unity game engine integration, the console-specific code is going to be kept to a minimum. However, the game truly is still at Pre-Alpha so we can’t comment further on this, porting is part of what the Kickstarter campaign will fund!
GT: You’ve partnered up with Limited Run Games to produce physical merchandise (of note the physical PlayStation 4 and PC version of Battle Princess Madelyn). How did the deal come into place?

CO: Limited Run Games has been in contact with Dan from the PR Hound team for some time in the past, but we also were introduced to them when we were considering options for physical release – because we knew we really wanted to make a proper on-the-shelf console title of this game. The timing feels right and the game feels large enough to justify a whole disc or cartridge to itself and Limited Run seems to be offering some of the most exciting platforms so far!

Tentative box art for the PS4 version of the game, available at the $45 CAD tier.

GT: If the physical version proves successful, will there be plans to make physical copies of the other versions?

CO: We really want to bring this game to everything we can in both physical and digital, but that has a lot of costs associated as beyond porting alone there’s dev kits and logistics, and minimum purchase amounts for physical copies. We are playing it by ear right now, and in a way, it’s really up to the demand (and backers on Kickstarter) that will help us reach beyond where we’re headed so far!
GT: As a Canadian myself [GT editor Elisha Deogracias], I have to ask: poutine or all-dressed chips?

For most of our readers who are unfamiliar with what I’m talking about, here are all-dressed chips.

CO: I want to give a big shout out to our incredible team, Maddi’s game wouldn’t be a reality without you! From Daven and I to the rest of you we thank you from the bottom of our hearts! And we hope you love the game as much as we have loved making it.

Thank you to all of the people supporting us on this journey! You are also making my daughter’s wish come true! Your support mean very much to us!

Daven Bigelow: It’s an exciting time for gaming and game devs alike! Thanks to great engines like Unity, we’re seeing a lot of awesome Indie titles coming to consoles just like Battle Princess Madelyn aims to!
You can back Battle Princess Madelyn’s Kickstarter here. You can also check out our review with Douglas Bogart of Limited Run Games here. Stay tuned for more news on Gaming Trend.