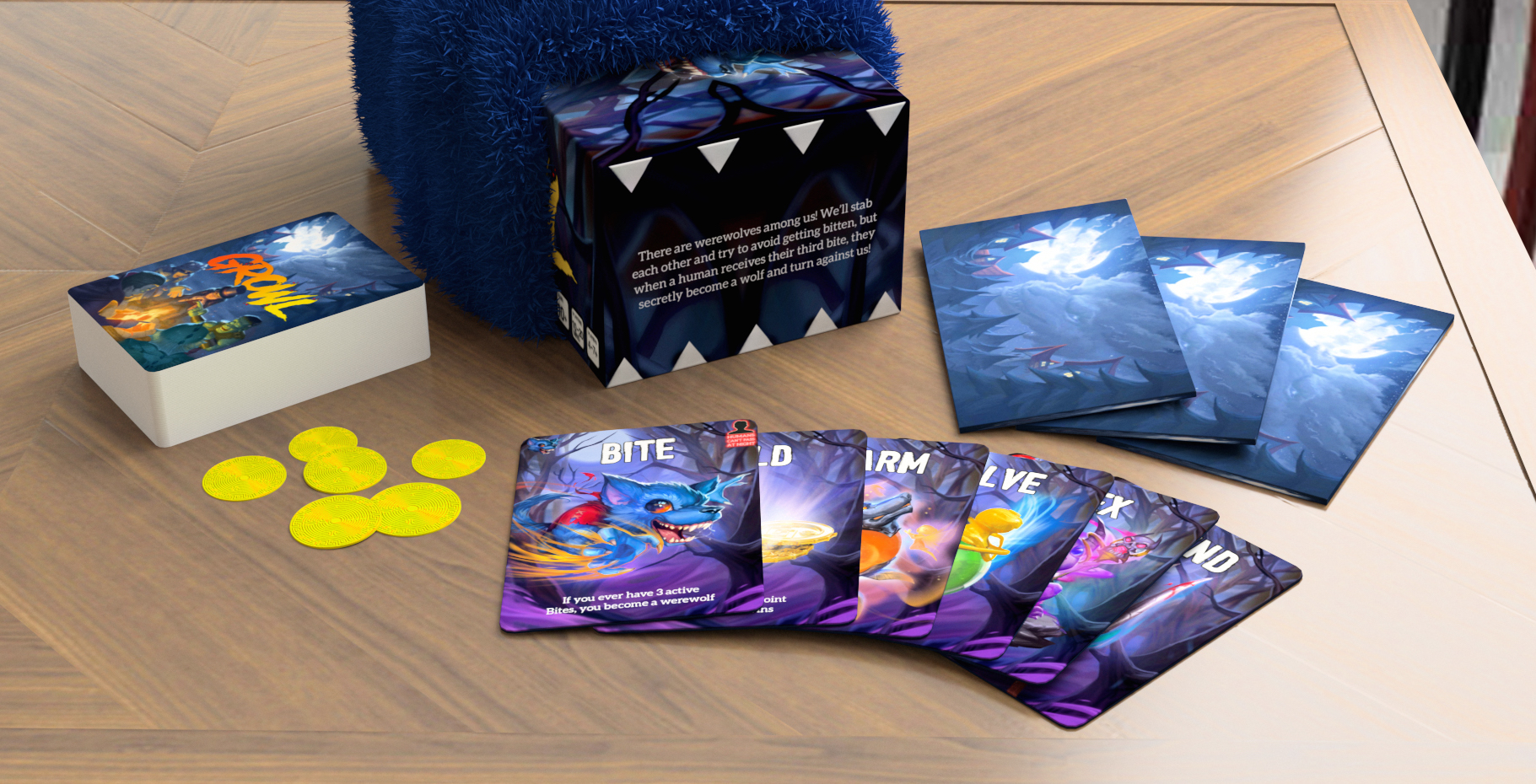 There is something so compelling about the paranoia and unpredictability of a social deduction game. GROWL, in its final days on Kickstarter at time of writing, explores these themes by giving players the ability to secretly influence one another’s identities as the game progresses. Werewolves try to proliferate as humans try to root them out. I spoke with Joey Vigour, the designer, to gain some insight into his process and the trends of the genre in general.

What is your history with board games?

I designed games when I was a kid. I’m really more of a storyteller and world builder type guy than board gamer. I like RPGs and miniatures games. I don’t like games with complicated math systems… and I require heavy theme. I was greatly influenced by Michael Fox’s 2011 interview of Peter Olotka (Cosmic Encounter).

In that interview, Peter talks about how even though Cosmic is a simple game, it deals with major questions of social interaction and human/alien psychology and technology; i.e. two aliens encountering each other really would be so unique in their abilities that diplomacy and mental maneuvering would be critical. Until that interview I hadn’t realized how deep that game was. So Cosmic was an early influence for me in 2011 or so. And that’s also when I realized that simple games could be deep.

It’s interesting to see you transition from Chaosmos to Growl. Can you discuss how you chose to make such a leap in genre?

I haven’t leaped anywhere, I am still making games about psychological warfare. This one isn’t as complex but it is still ‘I think you know what I have so I will do this…but wait, what if you know that I know what you have….” I also am still making the Chaosmos expansion and my next major game is expansive world-building. GROWL is just a quick way for me to launch into my own company with a less ambitious project.

Social deduction is becoming something of a crowded field. How do you feel Growl stands out?

It isn’t a copy of anything. It looks like a copy of Werewolf or One Night, but it isn’t. You are not getting a role and swapping your role and deducing other roles. You are INFLUENCING roles. You are passing a card to someone you want to help or hurt, and so that influence is the fun part. Whenever I demo it for people they often say “I’ve never seen a game like this before” and so I know it is original. In Werewolf the “A-ha!” moment is when you think you have figured out who is a werewolf. In GROWL that “A-ha” moment is usually when you suddenly realize just how MUCH power you have to influence the game by your few choices, and maybe another A-ha moment when you suddenly realize you might be the last human left.

It also doesn’t require a moderator or app, and you SLOWLY turn into werewolves bite by bite, which to me is extremely terrifying and more thematic than wolves just killing.

Furthermore, the werewolf theme is already associated with a popular social deduction game. Did you think this was a potential weakness, or do you feel people now associate the two together instinctually?

I themed it werewolves because I don’t think werewolves are the right theme for the classic game. Werewolf is a good game but you don’t get to turn people into werewolves (other than in rare cases using a role from the Ultimate version of that game). I think One Night is a good option for people, but casual gamers don’t understand the overall branding for that game. My game GROWL has a lower barrier to entry and I wanted to make it werewolves. There’s not really a backlash but very few people from my Board Game Geek contest have backed the game, so I guess I succeeded in making a mainstream/casual game. There’s 2 mini-expansions that make it a very deep experience, however.

Social deduction as a genre has come a long way in relatively little time. Where do you think the genre stands in terms of sophistication and where would you like to see it go?

There’s no end in sight. People assume because there’s been no major game-changers in a genre that the genre is dead. Just wait. I’m a fan of several unpublished prototypes I’ve seen by designers such as Jon Perry (Fall Guy) and Dave Chalker (Transylvanian Pickup). I think there’s a long way to go with meta aspects of these games where our real-life could be drawn into the game. I like ARGs and I think perhaps the next breakthrough in the genre might be a crossover with LARP style games.

Something uniquely difficult about social deduction design is determining how much information should be shared versus hidden. How did you approach this line when designing Growl?

This one came together pretty quickly so I didn’t have an ideological foundation for it. But the first version involved players getting to “sniff” (look at) cards in other peoples’ hands every single turn. The Night phase used to be the only phase, and you would pass a card to EVERY player. But once I figured out the Day phase (passing 1 card publicly to any other player) then I realized you can glean information based on who is passing what to whom during the Day phase, and then you could use that information to deduce who is likely passing Bites at Night. Wolves can conceal themselves by being more trustworthy in the Day, but then they can do less damage at Night. This Day/Night dichotomy is important for the game.

Some of your statements seem to indicate you were designing backwards to approach the issues with social deduction games. Can you discuss this process, and how you made a cohesive game starting from problems you identified with the genre?

I design everything “backwards” – for me games are not escapism and I can’t think of a prototype I’ve designed that was intended to be so. GROWL was born as an excuse to see people, and I started from the perspective “what game rules are simple enough that I can convince my non-gamer friends to come over and play?” and also “can complex psychological interactions result if I just tell people, here’s a good and a bad card, now who do you want to give them to?”

Originally, I was thinking about how some other social deduction games went wrong for my game group – especially for players who are not excited about deception or lying. My aim was to take a game I like – Werewolf – and a game that is quick to learn and play – UNO and figure out how to get the former into the latter. I ended up with the reverse of UNO – you don’t draw cards and keep them and later play them. You draw cards and GIVE them, and later receive cards from other people. And of course eventually the Night phase concept of passing left and right was merged with the Day phase of “reverse UNO” and that’s how GROWL resulted. It came together fast, so that’s one way to know I really have something exciting.

Growl has been a rousing success on Kickstarter. Where would you like to take the game in the future?

Thank you. I would like localized editions in many languages, and I want to travel to Asia for conventions since I have so many Asian backers, especially from Singapore and Thailand. I also have some expansion ideas.

Once Growl is complete, what other types of projects would you like to design?

I have two more casual games I want to make, I want to finish the Chaosmos expansion, and I want to finally bring to light a massive, expansive project that is very personal to me, a board game called Calamity, Inc. That one takes place in my hometown in the 1990s.

Where can we learn more about you?

If you live in Southern California I am one of the organizers for a large playtest community called First Play L.A.

We will have continuing coverage of GROWL as it moves forward as well, so make sure to check back. The Kickstarter ends My 11th, so check it out now if you feel interested!