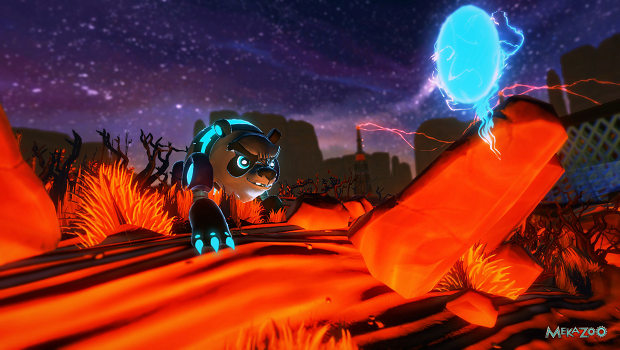 On November 15, Good Mood Creators released the long-awaited platformer Mekazoo. Only a day prior to Mekazoo’s launch, I had the opportunity to sit down with two members of the team: Mark Naborczyk, Product Manager, and James Hoag, Producer and Designer (James is also co-founder of the company).

When I was first invited to Seattle to visit the Good Mood Creators studio, I was surprised. What struck me was the studio’s location in the heart of downtown, very near the city’s iconic Pike Place Market, where rent prices are extremely high. It’s no secret that Seattle is currently one of the most expensive markets in the US, so I wondered how a brand new indie studio, with not a single released title to its name, could afford such lofty digs.

The apartment was a hive of activity. Clearly, this was a place of passion and creativity; concern about working nearly on top of your own colleagues was secondary to the task at hand. Desks had been set up around the perimeter of the living room, cables snaked across the floor in nearly every direction, and all the blinds were pulled shut. There was a very apparent nose-to-the-grindstone attitude around the place as many years of blood, sweat, and tears had been leading up to the next day’s launch.

Mekazoo’s roots come from a team-based student project. Hoag and the other co-founder, Jarrett Slavin, met while studying at DigiPen Institute of Technology in Redmond, WA. Hoag’s team had run into issues, and after being intrigued by the groundwork of what would later become Mekazoo, he joined Slavin’s team project, hoping to ensure his grade remained solid. “I joined Jarrett on the project and I was taken by it because I thought it was a really unique idea of looking at different platforming mechanics,” Hoag told me.

Interestingly, Hoag informed me that early on, only one Mekanimal could be played at a time, meaning that each area was designed specifically to fit that character’s abilities. After realizing that switching between animals during gameplay could be quite engaging, Slavin and Hoag went another route.

“Originally, we were looking at giving you three animals at the same time,” Hoag explained. But after getting that idea up and running, they hesitated, thinking that managing three animals was too chaotic, so they tried two.

“The animal you are [currently] is going to have the ability set that you want, or the other animal will have the ability set that you want, or you can choose based on both animals being able to be used,” said Hoag, “and that really pushed us towards this new [two animal] design philosophy.” According to him, managing only two animals dramatically increased the game’s enjoyment. And back to the drawing board they went, redesigning and reinterpreting, now focusing on two Mekanimals at a time.

The Pieces Start Coming Together

“The vast majority of Good Mood Creators are DigiPen [graduates],” said Hoag, “because there are so many great minds there.”

Most of the team at Good Mood Creators are former students or graduates of DigiPen Institute of Technology, just like co-founders Hoag and Slavin. They were picked up along the way, some early on and some later, as the project grew in both size and ambition. Mekazoo will be the first launched title for every member of the team.

One of the earliest additions was M.J. Quigley, the man behind Mekazoo’s breathtaking soundtrack. According to Hoag, Quigley had worked on 80 separate projects during his time at DigiPen; so many, in fact, that the school named an award for most game references in a single year after him. The inspiration for the game’s music comes from a French, electro-swing band called Caravan Palace, and after hearing a similarly styled track of Quigley’s, Hoag and Slavin knew he was their guy.

Naborczyk, the newest member of the team, has been onboard for just under two years. Originally from Detroit, he received degrees in English and Marketing, but has spent most of his career working in and around the music industry until now. A gamer growing up, he said, “I thought that [gaming] was something that you had to leave behind once you reached a certain age,” but his girlfriend, an avid gamer, convinced him otherwise. He met some of the Good Mood Creators while looking for a job, and with his enthusiasm to learn and grow, the match was obvious.

Wasting no time in promoting Mekazoo, Naborczyk said Steam Greenlight was a top priority for him, “That was one of the first things I did once I joined.” Hoag chimed in, saying, “We got Greenlit [on Steam] within about a week.”

The interest and passion for Mekazoo that’s shared within the team, has been thoroughly reflected by the gaming community, both on Greenlight and at expos worldwide. “Honestly, across the board, we’ve had nothing but positive experiences and positive reactions,” Naborczyk said with a smile.

When I asked about what we can expect to see from Mekazoo in the future, Hoag was surprisingly forthcoming. Earlier on in our talk, he’d mentioned that “We ended up cutting that [the Snake] and a world from the game, and we’ll maybe revisit that stuff in the future.” Naturally, I had to ask if there was any possibility of seeing those elements make a return. “If people are super amped about what we have, and it shows well, and Good Mood Creators is a viable company, then absolutely,” Hoag responded.

Going forward, both Naborczyk and Hoag expressed interest in getting Mekazoo out for Wii U.

Releasing in the midst of this year’s biggest games, Mekazoo still stands out. It offers something fresh and appealing. “We think we have something that’s, like, a unique Christmas present for people,” Hoag stated. He’s absolutely right about that.

You can grab Mekazoo for PC, Xbox One, and PS4. And, if you haven’t already read it, check out Gaming Trend’s review right here.