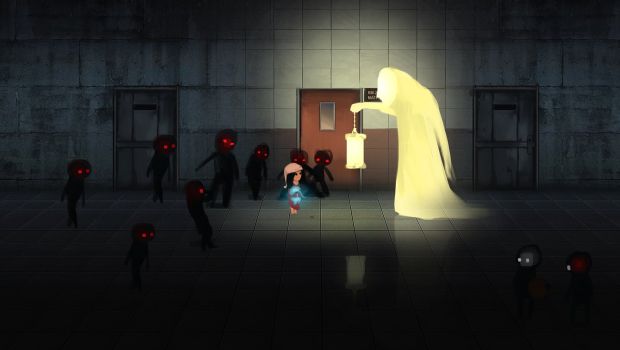 The last time I spoke to Josh, lead designer and composer on Oscar, the Kickstarter for the game was still 25 days away from completion and the future of Oscar yet to be decided. As fortune would have it, the game met its humble $40,000 pledge goal and development on the game is now in full swing. I conducted a post-Kickstarter interview with Josh to get a progress update and see how things are coming along.

GT: Congratulations to you and your team on the successful Kickstarter. You spoke about it briefly in a video update, but what was the Kickstarter experience like for you and the team? Was there any nail-biting?

Josh: Thanks Sean. The experience was…certainly overwhelming whenever you let it be. Going in we did as much prep work and anticipating as possible, but as with anything you do for the first time it’s an unpredictable adventure. For myself and as a leader I made it a pretty regular focus to reassure the team regarding our cause; ultimately Oscar was a different product trying to express something new, a risk that we couldn’t be certain would work out (by nature of the word). Working in games has always been unstable so once we put the problem in that context it was more enjoyable to do our best and know that many factors weren’t under our control.

Of course it was stressful at times and for those who followed it’s obvious we barely made it, but to be honest many more serendipitous and far-fetched fortunes have graced our project just to reach the point where we could consider kickstarting so…I wasn’t surprised when we somehow made it.

GT: With the funds you’ve been awarded, is the team fully assembled and hammering away on the game at this point?

Josh: Funny you should ask, it was only in the past couple of weeks where we finally nailed down the last couple positions. The full-time team isn’t that large, but we have a sizeable cast of contributors in various part-time roles. In the past we had tried out many other members in different positions; it’s been a long journey to assemble the final crew that fits this project given its distance from conventional games.

So to the second part of the question, parts of the team have been working away for the past few weeks, certain areas of the game now a bit further along than the others; at the same time I’m quite happy to report that the final version of the team has much more development experience, so progress is quite rapid and unhindered. Games right now are messy and one of the only ways to get around that is working with people who have been through that experience several times.

GT: As far as the makeup of the roles go, how is the workload distributed? Who are the full-timers and who are the part-timers?

Josh: The simplest way to put it is that each discipline and ‘level’ of the game has a full-timer. The game takes you across several artistic and gameplay styles, so I’m having the team work in several small groups, within each a very experienced member (usually 10+ years) helps the team keep everything congruent, making sure it fits together. The extra full-time workloads go to art in particular (as mentioned was the goal of the Kickstarter campaign), as well as a grizzled programmer I’d been chatting with over the past few months who leads the programming team now (and does our physics).

GT: Is there an area of the project (programming, art design, sound design, marketing, etc.) that you anticipate, or already know to be,  the most challenging?

Josh: To me the obvious answer is the design; The process we use focuses on how the pieces of the game fit together to create an experience. We’re trying to show that creativity and good management in this area increases the potency of what can be delivered to the player far more than upping the polygon count or simply shooting for a unique game mechanic. Answers we can find on this side of development can hopefully help and apply to almost any developer, as opposed to technically demanding innovations that once again draw focus away from the basics: why is X in the game and how does it affect and interact with each other element in the current context/scene?

Other than that, the art took awhile, rather developing its style to make sure we were generating the right ‘feel’ in each section, but that was largely determined before the Kickstarter began. We’re also quite fortunate to have significant narrative/creative chops driving our creative juices, but sometimes you just get lucky and find someone with exorbitant talents.

GT: Are you on target for your Fall 2014 release so far? Any early access or beta plans at this point?

Josh: Fall 2014 stills looks really good, though most relevant from my perspective is doing right both by the people I work with and those who’ve given me their support. It can be often difficult to predict what will happen in development regarding schedules, but as with many other indie titles I’m quite certain a ‘mostly complete’ version of the game will reach the public (or at least backers’) hands much sooner than retail.

Oscar is a often a game about small details and how they influence our experiences and understanding more than we think, so the polish phase will be particularly demanding. At the same time though, it’s trying to achieve some fairly unique narrative developments and emotions that we’ll be testing with users sooner rather than later, so backers and friends that are interested in giving feedback will have that opportunity not too long from now.

I’m hoping this doesn’t sound sketchy or anything like that; in my career thus far I’ve been part of very few (if any that I can remember) delays on a product. I’d like to keep that record intact, though as with anything new, that being indie development, it’s impossible to predict everything. AAA was home for a long time and indie has even fewer standards; I’m comfortable delivering in the former and certainly anticipate holding true to our delivery date in the latter, but as I mentioned this project has seen some fairly unique plot twists and opportunities. I’m actually out of town at the moment speaking with educators and potentially school boards about Oscar’s potential impact with students – I’d have never guessed we’d generate such interest, especially outside of people with whom we’d gone out of our way to speak.

GT: That’s very interesting that you are exploring ways to integrate the Oscar experience with education. If things go well for Oscar, not just critically but also commercially, will your next game be a sequel to Oscar, or would you want to go in a completely different direction?

Josh: An aspect of our goals that might generally come across is the volatile nature of what we’re doing, not just game development but also pursuing ways to better improve its process and results. It’s a question I receive often and while I’ll share a few potential outcomes, so much of what’s possible will hinge on factors outside of critical and commercial success.

We could do a sequel; it’s certainly an idea we’ve entertained, mostly because Oscar has become a character whose childhood struggles and motivations pose interesting questions as to her adult self. I would be surprised if we didn’t address her later years someday, though I’m not sure it would be our next title necessarily.

As I mentioned before, with Oscar we were very fortunate to receive exceptional narrative/creative direction, a unique telling of childhood; A subsequent product might not necessarily have that strength to leverage, though I would anticipate that at the very least we’ll continue making games that help share human experiences. I understand what games are as they provide entertaining and competitive experiences, but I believe the demand for products not limited to those two spaces is overwhelming. We (gamers) want others to believe that our interests are as legitimate as any other medium, but I think to use a film analogy, most games are a bit closer to Transformers than say, 2001 a Space Odyssey.

Oscar will certainly feel different than most games and I’m certain we’ll keep pushing in that direction.

GT: Josh, thank you so much for yet again sharing Oscar with us. Do you have anything you want to add, any cool updates in the coming months that we can look forward to?

Josh: My pleasure Sean! I’d just like to add that it has taken a bit of time to digest and clear up paperwork regarding the Kickstarter, so our apologies for being a bit silent over the past few weeks; Look forward to regular updates on the project, special offers for those who want to give feedback and help us out and keep checking out the websites for news, especially if you’re not a backer!