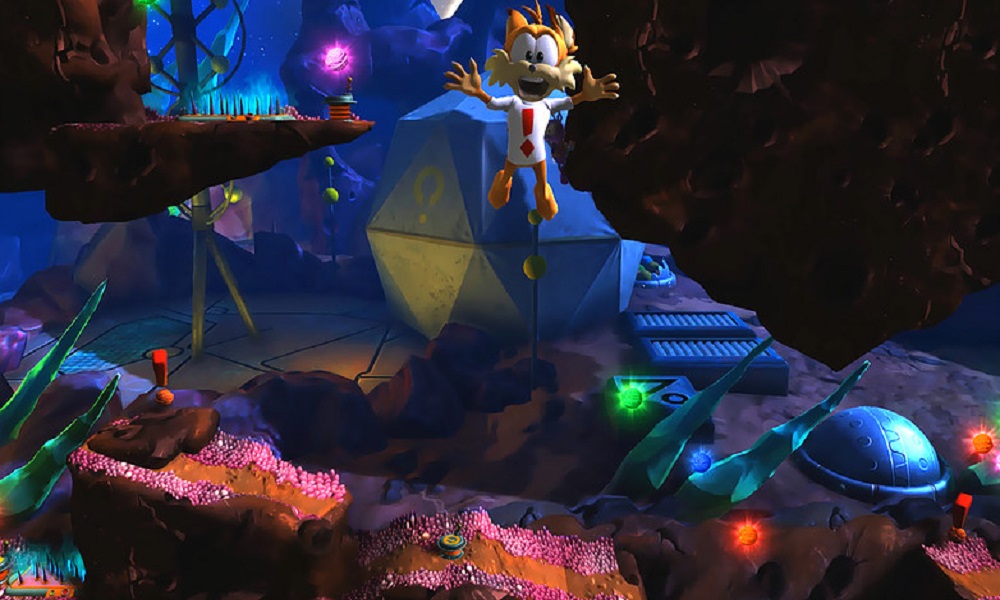 Since the recent release of Bubsy: The Woolies Strike Back, the eponymous Bubsy the Bobcat has been busy pursuing a ton of different projects. He took some time out of his busy schedule to talk with us regarding the release of the PlayStation 4 and PC title, as well as what he’s been up since the last game came out over two decades ago.

So Bubsy, it’s been 20 years since the last time we’ve seen you in the gaming world. What’s changed with you since then?

Budget challenged movies in Europe, perhaps you heard of them, The Good, The Bad and The Bobcat, Indiana Bobcat and the Temple of Falling Damage, Bubsy T Bobcat in OctoWoolies.

Big question that I want to know: Why don’t you wear pants, and where can I buy that shirt?

Why don’t I? Elisha, I’m a method actor! The shirt? I get mine from central wardrobe, but Amazon sells them too.

The purrfect look this fall.

So The Woolies Strike Back is going to be the first Bubsy title of the millennium; heck, a lot of kids these days haven’t even heard of you! How important is it to make a first impression in this generation of fidget spinners, selfie sticks, and a perpetual sense of sarcasm?

“Perpetual sense of sarcasm” – I call that my wheelhouse.

Another millennial question for you: Pineapple on pizza. Yay or nay?
Ok, I will let you in on a secret– I prefer cheese with a little snausages sprinkled on top – that’s good eats

While Bubsy 3D (your previous game) was a 3D platformer, this one is sticking to the 2D route. What was your inspiration to go back to the good old second dimension?
Elisha, may I call you Elisha? Elisha, let’s be honest. Bubsy 3D was a mistake – you know, a bubonic plague kind of mistake. A Gigli kind of mistake. A Bill Buckner ball between the legs… well you get the picture. Honestly, there’s something hypnotic and romantic about getting to the end of traditional 2D level. You start, you continue, you finish – and you collect a lot of stuff in-between – kind of like life. You know what I mean Elisha?

The Woolies Strike Back is an obvious reference to the creatures from the first game. What did you do to enrage them this time?
Let’s be really clear here. I AM THE VICTIM – they stoled (stolen? steal?)… They TOOK my golden yarnball. I’m the enraged guy here, err Bobcat.

We’ve got a UFO (Unidentified Feline Object) on the loose!

The press releases said you’ll be back with hundreds of quips and one-liners during gameplay. How do you stay so dedicated in your role as the protagonist?
IDK saying stupid things just comes naturally to me. It’s a gift.

Your Halloween launch trailer took a dig at our old pal Sonic the Hedgehog, who’s out to debut a new game on November 7. How’s the rivalry looking for you two? Are you on speaking terms again?
That whole thing was CGI. I never saw that kid. The AD said look bewildered and then look at the camera – gawd, I can act! I tried to text Sonic and apologize – but he didn’t take it very well. Let’s just leave it at that.

Speaking of the competition, the newly released Super Mario Odyssey retails at $59.99, while Sonic Forces retails at $39.99. The regular edition of The Woolies Strike Back is a mere $29.99 (with a launch PC discount). How do you stay so frugal during the holiday season of expensive AAA games?

McDonalds has done really well with the dollar menu, so we went in that direction. We did try to put fries in the Purrfect Editon – but they turn really black after a few weeks, so we left them out.

You might not get some salty fries with the limited edition, but at least you can get more Bubsy in your life!

Earlier, you were musing about “If hard platformers are the cat’s meow once again, then it seems purrfectly clear that everyone should have a ball with a game they can actually finish!” That being said, what game is the Dark Souls of your generation?

Everquest. I did a speed run and finished it in a thousand hours – piece of cake.

You’ve recently made Twitter and LinkedIn accounts to keep yourself updated. What’s the best recommendation you’ve received on LinkedIn?

The PlayStation 4 and PC are good and all, but have you thought of porting The Woolies Strike Back to the Nintendo Switch? I hear the eShop is pretty warm this time of year!
Well Elisha, (REDACTED). Because (DELETED) and then just (TOP SECRET CLEARANCE REQUIRED) and that’s really all I can say for now.

Will we see our see our feisty feline friend on the Nintendo Switch? [REDACTED]

While the game just came out on Halloween, where do you think the future’s headed for your career? Movie deals? Books? Sequels?
Squirrels? Actually, Bubsy The Woolies Strike Back was one of the most fun things I’ve ever done – I might just want to stay in games for a while.

Finally, any last words of wisdom for our readers and characters that aren’t named Sonic?
Play games, have fun. Buy anything that says “Bubsy” on it.

You can purchase Bubsy: The Woolies Strike Back now on PlayStation 4 and PC, the latter of which has a 34% discount during the first week of release. Stay tuned for more news here on Gaming Trend.