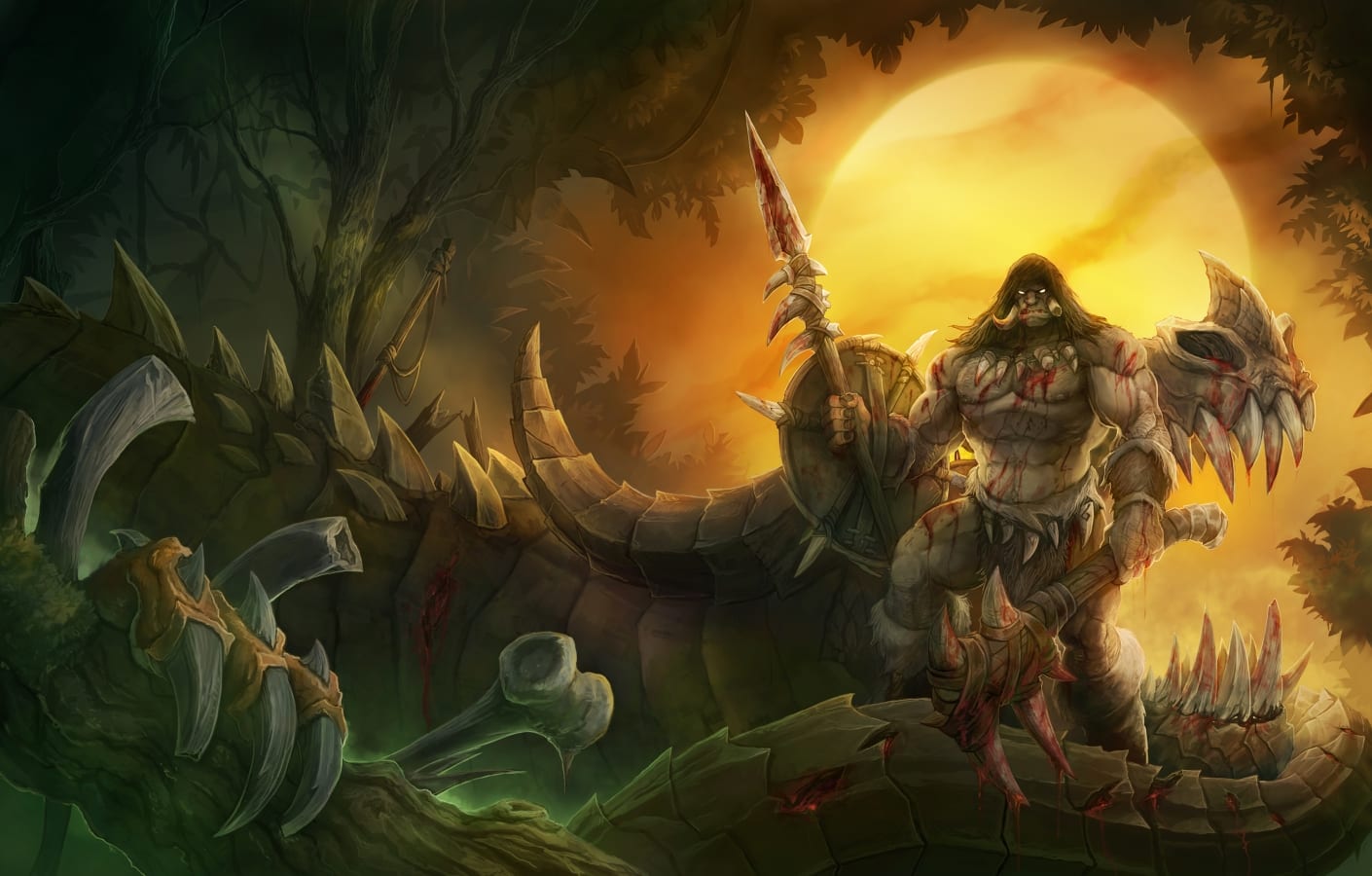 I had the honor of being able to ask Blizzard Entertainment’s Senior Art Director Samwise Didier some questions ahead of his upcoming book release, Brutal: The Art of Samwise, which will be available on October 20th 2020. This guy is a absolute legend in the video game world. Having been at Blizzard since 1991, he’s artistically created the worlds and creatures that live in them for Warcraft, Starcraft, and Diablo, to name a few. I’ve played World of Warcraft since beta, so I cannot tell you what an amazing opportunity it was for me to be able to ask Samwise some questions! If you’re an artist, you need to take note, this guy is inspirational as hell. Check out the interview below. 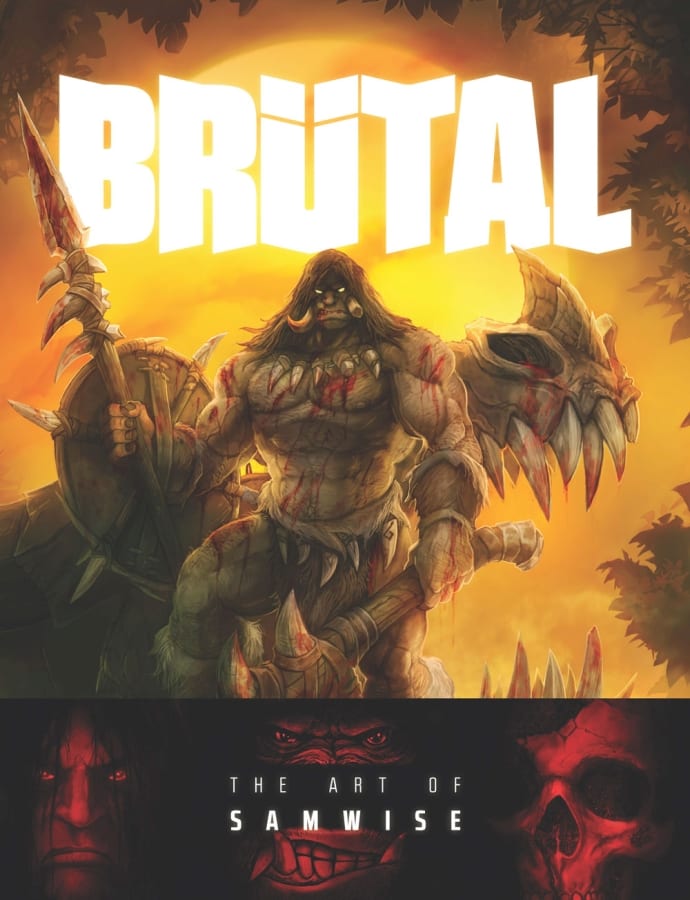 Holly Hudspeth: When you get to work on personal art, what are some of your inspirations?

Samwise Didier: I get most of my inspiration from silence. When it is quiet, I can think. I can come up with ideas. I tell artists all the time that they should never be uninspired. You should NEVER stare at a blank sheet, canvas, or monitor and not have something to create. Turn off your phones, stop binging whatever is the new thing, put down your game controller, and give your creative mind time to think of things to create. One of my sayings is Stop Living In Other Peoples’ Worlds, Create Your Own! This is important for artists. Phones and shows and games are fun. But as artists we have the ability to bring new worlds to life. If you spend all your time in someone else’s creations, the world will miss out on yours. And even more important, YOU, the artist, will miss out on all the fun and fulfillment creating brings.

Samwise Didier: I literally will work with anything. All my artwork, professional or personal, is done with whatever is around, and with the same mentality. I have a mantra (I have many) but this is one I post for artists to keep in mind.

Of course, having high end materials is nice. I have worked with top end tools and low tier stuff. It makes a difference, but not much. Give me a box of broken crayons and I will make an image the likes of the Macaroni Grill has never seen! They have paper tablecloths for you to draw on, in case that previous sentence made no sense.
Artists do not need to worry about what tablet is best or what brushes to use. Those things help, but they are not what is needed to be an artist. All you need to be an artist is a desire to create, and then the simplest of tools – pencil and a piece of paper. Start there with this mantra in mind, Practice, Patience, and Perseverance. You need to practice to get better, you need to have patience as it takes time to get better, and you need perseverance to take you through the difficult times when the art isn’t looking how you want it to. Follow those steps and in one year look at your work. Compare it to the first one you created. One just needs to START, and all the rest will be learned along the way. At least, that is what has worked for me.

Holly Hudspeth: What is your favorite part of the drawing process, i.e sketch, shading, coloring?

Samwise Didier: My favorite part is the finishing of one piece, and the beginning of the next one. At the start, you have all these ideas for how the image can be, you are sketching everything, it’s messy and beautiful. Then the real work starts. The cleanup and tweaking of the layouts, etc. The most laborious part is in this middle area. Hours of painting and rendering, getting all the lighting and textures down. It is comparable to an artistic road trip. It is fun in the beginning, but then you have HOURS OR DAYS of artistic travel you need to commit yourself to to get to the end of the journey. An hour or two before you get to the end, you get all pumped up again, the ride is almost over, and you start adding all kinds of little touches. When you finish your trip, you stay with the image for a little bit to admire the work and effort, then you get some ideas for the next adventure, and you set off once again.

Holly Hudspeth: What kind of software do you use to paint with?

Samwise Didier: Photoshop and Wacom tablet. I was using an ancient Wacom tablet, and a 20-year-old version of Photoshop too until I recently upgraded my computer. Now, I use the latest version of both, but it has not changed the way I create art. I get asked about switching to a Cintiq a lot. I have used Cintiqs before to create artwork, and they are fine and all that. I just prefer using my Wacom tablet. I have a cabin and I take a lot of “creation” vacations, up in the mountains. I’ve set up my old computer and Wacom tablet up there so I can still create and write while I am away from home. ABC! Always Bring Computer!

Holly Hudspeth: What is your favorite race to draw within Blizzard games, after Pandarens? 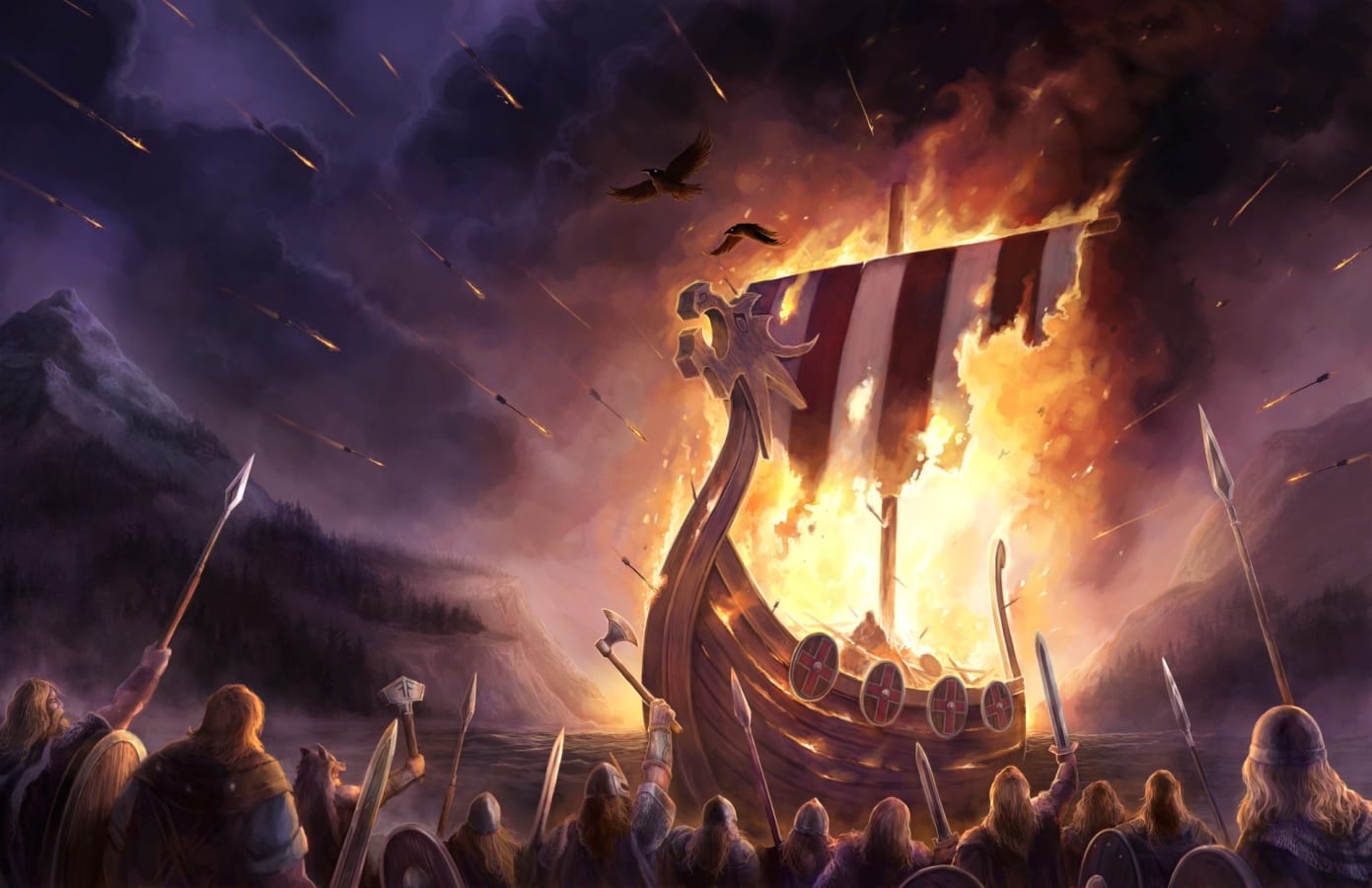 Art by Samwise Didier. One of my favorites from the upcoming book Brutal: The Art of Samwise.

Holly Hudspeth: What is your most beloved piece of art you have ever created?

Samwise Didier: A few come to mind. I would say a piece called The Legend Reborn that I did for Hammerfall is one of them. I created the artwork on my own, just for fun, and I really juiced up their mascot, Hector. He was a more traditionally armored warrior with a great stone hammer. For The Legend Reborn, I gave it a full Sammy makeover. He ended up wielding two hammers, one of lightning, the other of fire. He donned a fancy hooded cloak and sported a set of silvery steel wings. I shared the art with them, and they loved it, and ended up using it for their DVD called Rebels With A Cause.

Another favorite is called Giant Slayers, which features a trio of dwarves, standing on the fallen body of a giant. Usually the traditional ‘hero’ shot is the one dude standing on top of a pile of bodies. The artist, Frank Frazetta perfected this image with his Conan covers. For my piece, I did a reverse Frazetta, whereas it is a pile of bodies standing on one dude. This image also has a lot of storytelling woven into the art. The main guy, who looks to have dealt the killing blow, is looking all bad ass, but eyeballing the thief, who is stealing all the gold rings but looks to have contributed nothing. The oldest of the group, is having a pipe and collecting his arrows for the next encounter. And it had Dwarves in it so…

Another one I really loved creating is called The Adventure’s End. People looking at the art will see it shows a typical D&D type group, sitting around a table drinking and sharing war stories about their latest kill. The head of a recently killed dragon is on the wall and they are all laughing and having fun with each other. The elf is laughing at the dwarf, the wizard is checking out the big barbarian warrior, who is stacking coins on his head of the dwarf and they are falling into his ale. What the viewer can see that the party cannot, is that the “dead” dragon’s eyes are glowing, calling forth her young to hatch from their eggs. The end of this tale is answered in the magic eight-ball that is among the collected treasures. Can you figure out what it says? 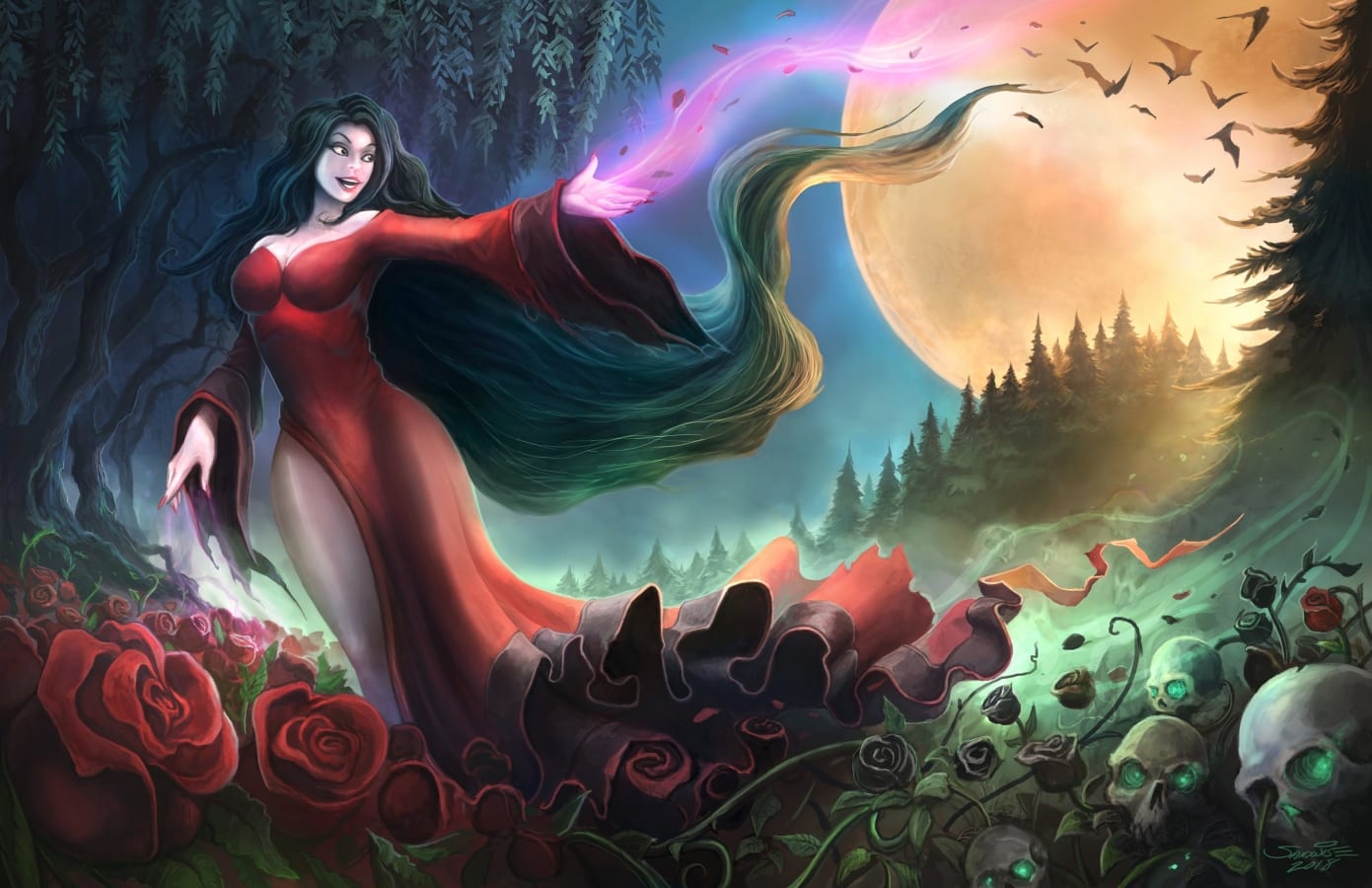 A Walk in the Woods at Midnight by Samwise Didier. Beautiful!

Holly Hudspeth: A Walk in the Woods piece: what inspired it? It’s got kind of a Mother Gothel, Vampira, Persephone vibe to it, and it’s awesome.

Samwise Didier: I am glad you like it. It is a more recent piece and most have not seen this one. It was inspired by watching my daughter, the one who inspired the first Pandaren picture, perform the role of The Witch in the musical Into The Woods. She sang a song called The Last Midnight and this is what led to the creation of this image. The full title of the art was A Walk In The Woods At Midnight.

Holly Hudspeth: I noticed the page with all of the racial icons for WoW, did you create all of them or were they a group project?

Samwise Didier: Yes, I created all the racial icons up to the Pandaren. They were mostly something I just came up with on my own and using reference from the games. They are some of my favorite pieces as you can really tell what race they belong to, not only from the shapes, but the color choices. The Blood Elf, and the Forsaken, are REALLY popular with people who get tattoos, the Horde symbol too.

Holly Hudspeth: I have played WoW since beta, and it’s been a part of my daily life for the last 15 years, what was your favorite character to bring to life?

Samwise Didier: The world of Azeroth. We developed so many of the heroes, villains, and creatures, for WoW in Warcraft III. It was great diving deeper into their character kits and the like but WoW allowed us to create the world in a way we have never seen it, to live in Azeroth, not from a god’s eye camera, but as a denizen of the world. 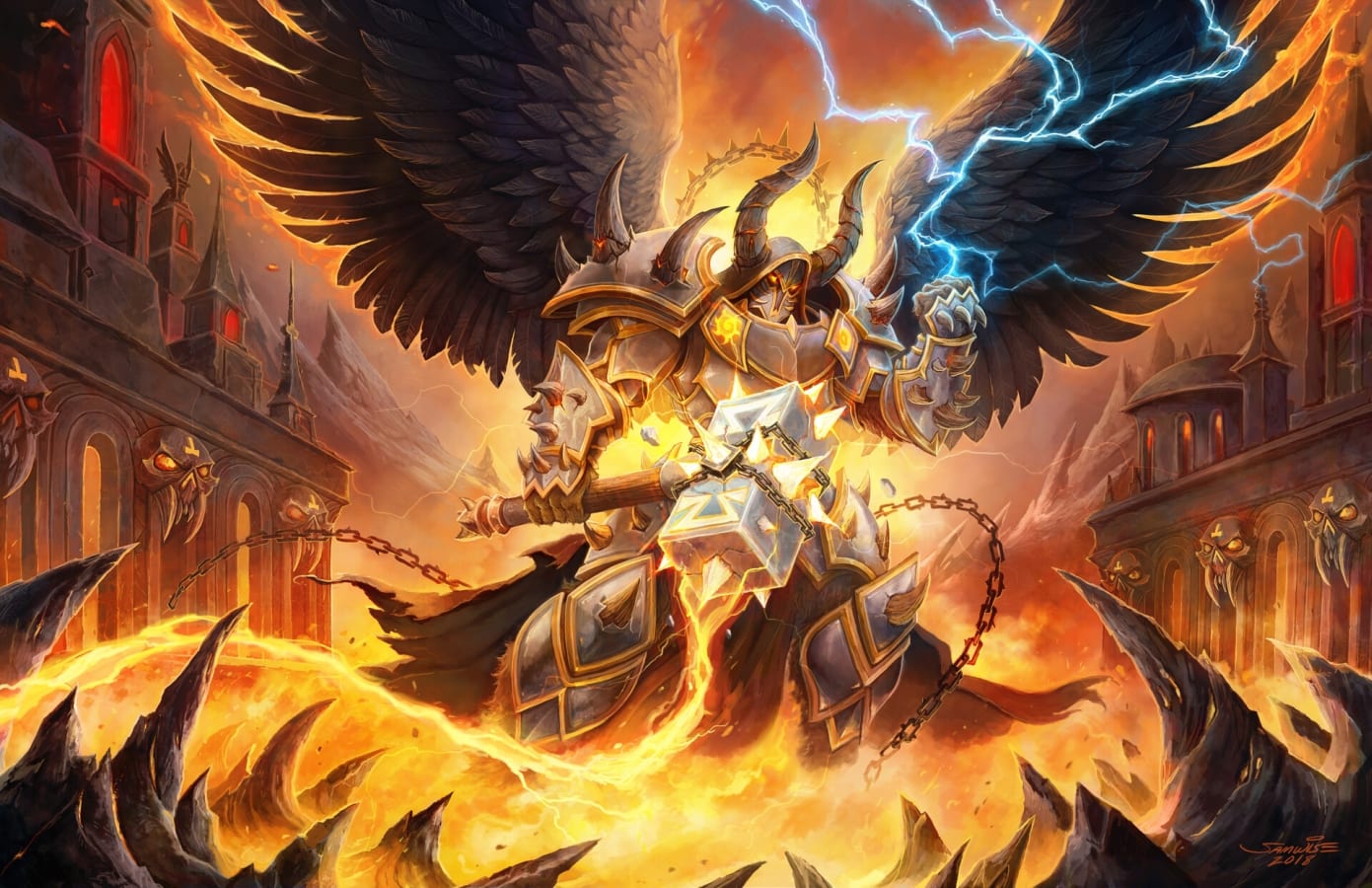 Holly Hudspeth: Name someone in the industry you’d love to work with in the future.

Holly Hudspeth: Is there a particular heavy metal artist you always can rely on to listen to while you’re drawing to get the creative juices flowing?

Samwise Didier: It really depends on the project. Metal, in general, is a go-to music. My musical tastes go in every direction. I cannot listen to my music on shuffle as it goes from Slayer to John Denver, and then from Immortal to Tom Waits. It is hard to get into a flow when it is Barry White one minute, and then Black Sabbath the next. I usually pick music that fits the image.

Holly Hudspeth: Last but not least, several of my WoW friends and I want to know: Did you/do you have any say in the design of the armor sets in WoW?

Samwise Didier: Yes, in the early years of WoW, I did most of the concept art for tiers 1 – 3, as well as some designs of later tiers. I would just draw a front view of the armor, sometimes very loose, sometimes more rendered, depending on my schedule. My favorite designs I did for the early tiers are for Judgement, Wrath, and Ten Storms. Some later favorites would be for Corruptor, Destroyer, Dream Walker and Avatar.