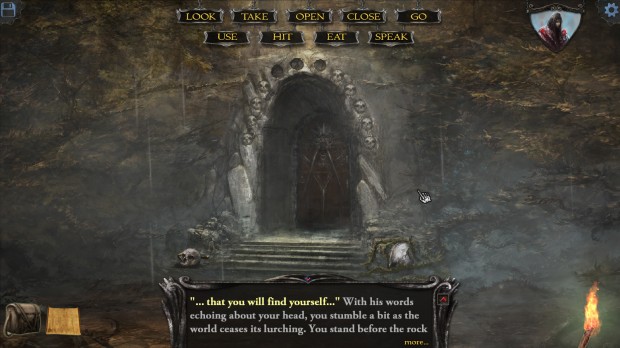 We sat down with Karl Roelofs, Design Director at Zojoi to talk about their revival of the classic NES title, Shadowgate.  Coming to PC, Mac, iOS, and Android, this reimaging of the original brings with it all new content and a stunning uplift in graphical quality.  They’ve also brought back the original Hiroyuki Masuno soundtrack (courtesy of composer Rich Douglas), and we’ve got a bit of a sample.   You can find that after our deep dive into Shadowgate.

What are you doing to bring Shadowgate to a new generation?

Dave and I had long conversations about what we wanted Shadowgate to be. We didn’t want to do a straight port- just make the original game work on newer computers and tablets. What we did want to do was to re-imagine Shadowgate for a whole new generation of gamers while, at the same time, making it familiar to those who have played it in the past. To that end, we have updated all the puzzles and revamped the storyline to fit a more cohesive narrative. We’ve expanded the castle and the creatures inside to make a thrilling new interpretation of the original game. The animation and sound alone is sure to please both new and old gamers alike. We also wanted to add things we never really could – over 40 adventure achievements, multiple difficulty levels, and cut scenes.

The trailer suggests some of the same Myst-style click-through adventures we saw in the original. How did you update the UI to take advantage of modern machines and touch screens?

We really embraced the command system the original games employed- a series of commands that can be used on any item in the game. This allows players to do just about anything they can think of in the game. Because of that, we didn’t want to be too fancy with icons spinning up around objects. We wanted to make using commands as easy and straightforward as possible. Players have the ability to ‘lock’ commands as well as a good number of programmable key binds that allow players to make whatever shortcuts they want. We also added a map feature that tracks where you have been while providing some record of things you have found along the way.

Are you using the same story as the original, or is this a new adventure?

It is a combination of both. We took the original storyline and beefed it up with a rich backstory that ties up loose ends from the original game. We also made it new by creating all new puzzles as well as taking the original puzzles and altering them so that they are recognizable but play out differently. The puzzles flow really well with the fiction.

Your art style looks like it’s hand-painted. What was the inspiration for this art style instead of going for a hyper-realistic look?

What we really wanted was a dark style that brings about a new, yet familiar angle for Shadowgate. Our fans are constantly telling us that Shadowgate scared them so much- so that’s the direction we wanted the art to take. And Chris Cold’s speed-painting style really brings a visceral feel to the land of Shadowgate. We basically didn’t want to make a game that looked like it was designed for Ikea.

Congratulations on your Kickstarter success! One of your stretch goal is Ouya – why that platform instead of the touch-screened Vita?

Thanks for that! At the time of the Kickstarter, the Ouya was gaining momentum and popularity- so it was a no-brainer to support a game that plays on that device. We are focused right now on the release of Shadowgate for Windows, Mac, iPad and Android tablets. After that, we do want to bring it to other consoles and we’re looking at which ones make the most sense to tackle next.

Give us a little bit of info on the card game. What game would you most closely compare it to?

In the card game, players are competing with each other to create the staff of ages or to gain the most booty possible. This involves gaining items and relics with which to complete quests. We have a cool mechanic of torch strength that translates into the amount of actions you can take during your turn. Players equip items and use these to gain more points on quests and to eventually create the staff of ages if they can. To be honest, it’s not like any game that I have played. We are excited that Coleman Charlton, the man behind the Middle Earth collectible card game, agreed to create a card game that puts players smack dab in the Shadowgate universe.

Zojoi has backed 28 other Kickstarter projects. What sort of projects do you support?

We really love projects that are close to our heart as well as ones that have a great idea and show they are dedicated to their project. Historically, we have supported far more small indy projects than ones asking for $500k+. We have supported projects from the Settlers of Catan Gaming Board to various card decks and cool miniatures. Plus we backed a whole host of game concepts that run the gambit from retro-style adventure games, to unique new-play styles. We also get a lot of requests to recommend projects to our backers and we weigh those carefully, ensuring these are things we are behind and want our backers to consider.

Will the new Shadowgate retain the old one’s capacity to kill the player in many interesting ways?

That is one of the hallmarks of the original game- providing a bunch of unique ways for one to do away with themselves. We plan to keep that tradition alive (so to speak). We have a number of achievements that are tied to a player finding all the different ways they can kill themselves. We also have a good number of hidden deaths that the player can unlock!

Will the puzzles be as unforgiving when it comes to incorrect solutions, or will things be a bit more ‘friendly’ this time around?

I’d answer that by saying that Shadowgate will be both friendly and unforgiving at times. Really, what we are looking for is to be fair in the way the game plays, providing a lot more clues to what to do if the player is willing to look for them. We went thru every puzzle in the game to ensure we didn’t just offer cheap kills for the sake of killing the player. Additionally, we don’t want the player to get stuck too easily, so we’ve provided alternate means to solving some of the puzzles as well as providing some latitude when it comes to killing the player. But having said that, players still have ample opportunity to get themselves in a bit of trouble if they don’t pay attention.

Why did you decide to resurrect this older property instead of a completely new world?

We’ve always looked at Shadowgate as being a trilogy. So, we wanted to re-introduce the original game first with the changes that make it stronger and reboot the franchise. This way we can build the world of Shadowgate and lay the groundwork for the other stories we wish to tell.

How can our readers jump in on this new vision of Shadowgate?

We are offering Shadowgate for presale right now over on www.shadowgate.com. The game will be out late summer so we offering fans the chance to get a $5 savings on the game before it comes out. We are also allowing players to get in on the beta and receive the game a week before it is released to the general gaming public.

I’d like to once again thank Design Director Karl Roelofs and composer Rich Douglas for giving us a good look at Shadowgate.  You can find those aforementioned soundtrack items below: