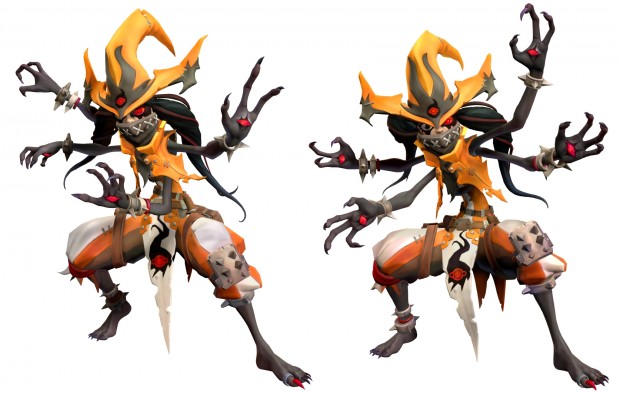 From challenge comes opportunity. And, at least in games, challenge can also create risk. Gearbox Software might be known for first-person shooters, but with a game like Battleborn the team has moved outside of their element, especially when it comes to aesthetic.

“For better or worse, we were the company that was kind of known as ‘the gun company,’” says Scott Kester, art director for Battleborn.

The greatest challenge for the gun company, then, is to make a game that doesn’t rely solely on guns. In Battleborn, many characters forego triggers and clips for swords, shields, or even their hands. In talking with Kester after playing the game at a preview event last month, the conceit was clear: Battleborn wasn’t going to be just another Borderlands.

“[We] didn’t want to make a game where all I saw on-screen was a gun,” said Kester.

The art director for the project described different characters and early ideas for the game’s weapons, like Orendi’s four arms and the eyes on her hands being visible. Creating a look that was unique to each character, from their outward appearance down to the visible, tangible user interface was key to what Kester and his team wanted to do.

Even in a character’s silhouette, the art and character design team takes strides in differentiating between the many Battleborn. In the heat of battle, you might be looking at a large amount of enemies, trying to pick them apart, or trying to discern an ally that needs healing amidst a melee in the middle of a lane. In these situations, it’s important that you can easily locate your exact target. As Kester puts it, seeing an outline or silhouette and “making those synapses fire” is key to clarity in gameplay.

“If Shayne and Aurox are coming at you, that’s going to look different than Marquis on a ledge sniping you,” says Kester.

According to Gearbox, the key to current competitive games is creating defined, individual characters. As Kester describes it, there’s a “rock-paper-scissors, apples and oranges” type of approach to this art. Several members of the team referenced fighting games as inspiration, pointing to their diverse rosters and the way they mix so many styles and backgrounds into a cohesive, balanced line-up.

Creating diverse rosters, though, can lead to issues — how do you make a Battleborn that will appeal to everyone? For the team at Gearbox, they’re not worried. Most players, even our own at Gaming Trend, tend to gravitate towards certain characters when they’re designed well, and even for an art director it’s natural to not love every one of the Battleborn.

Beyond the design of the individual characters, Gearbox is working to develop its own style for Battleborn. Rather than fall back on Borderlands’ signature cel-shade aesthetic, the art team once again found an opportunity to try something new, melding 2D with 3D to create a look that manages to be more coherent than one might expect.

From the opening animation that melds hip-hop with animation and oozes Samurai Champloo style, to hand-crafted explosions and effects for each character, Gearbox Software has worked to drive a new kind of style into Battleborn. Michel Gagné was brought in to help create many of these effects, having worked previously on special effects for Cartoon Network’s Star Wars: The Clone Wars series, and developing the beautiful game Insanely Twisted Shadow Planet.

This art style isn’t something that you’d expect everyone to latch onto immediately though, but Kester isn’t worried about that. For Battleborn, the studio is more concerned with creating something memorable.

“If you don’t like it, I’m okay with it, but if you remember it [then] I think it’s cool that we did it,” says Kester.

It’s an aesthetic approach that has rarely, if ever, been seen, and certainly a concept that runs against the grain. According to Kester, though, 2K Games and its studio head Randy Pitchford have been receptive of the creative concepts, spurring them on to innovate.

“In a world where I think a lot of people are marching this way, we have a tendency to march [another] way,” says Kester.

The results speak for themselves, as Battleborn has shown time and again to be something interesting amidst the spring rush of titles. It may be difficult to pin down what genre it falls under, but that speaks to the concepts this team is fielding. From the art direction, to the character and level design, Battleborn isn’t looking to be the next Borderlands, but rather something else entirely. Whether fans are enticed by these new ideas or not, it’s more about creating something interesting than creating something safe.

We’ll see more of Battleborn as we approach its release date of May 3, for PC, Xbox One, and PlayStation 4.