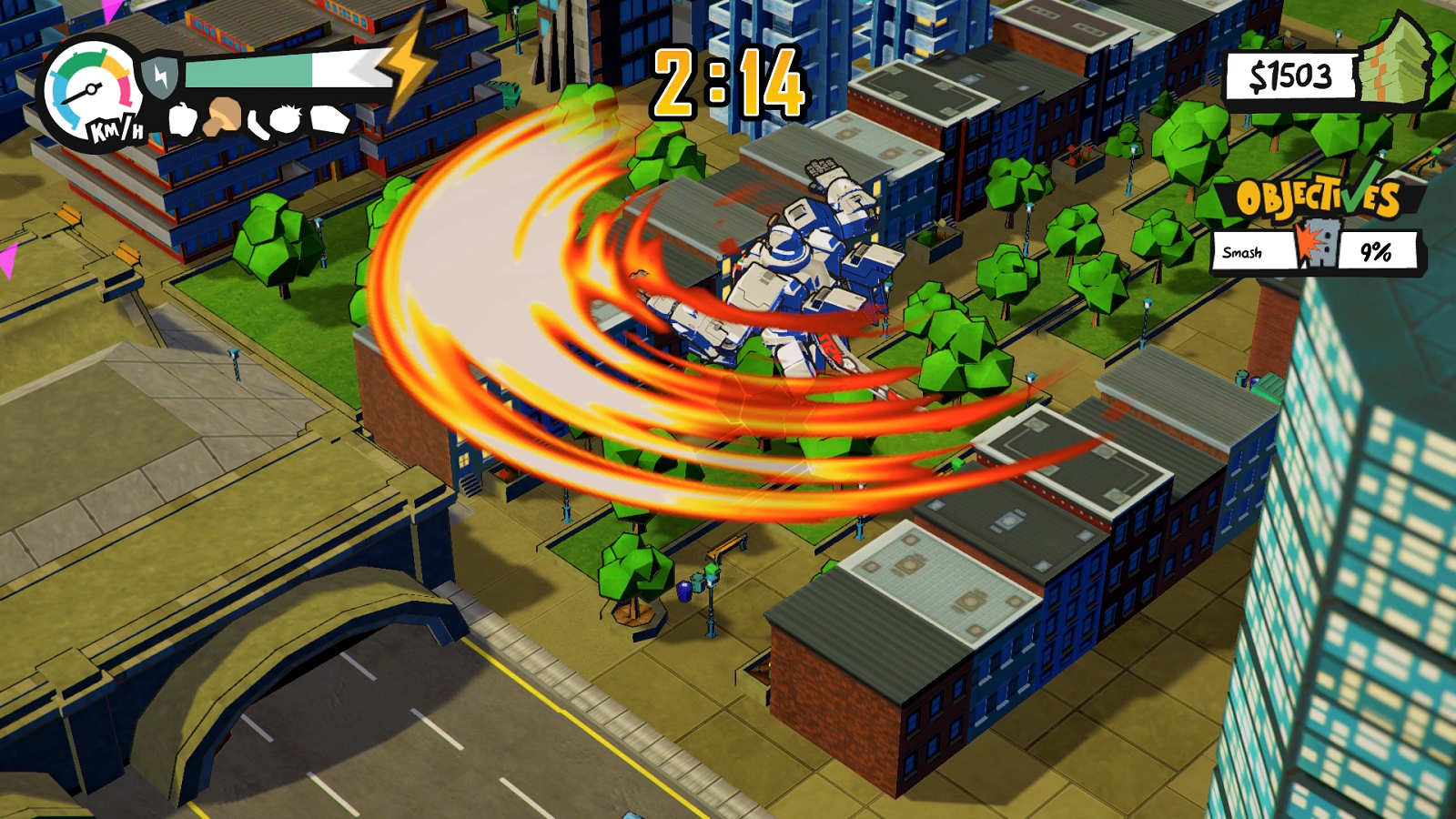 For those that are hungry for some zany PlayStation 4 titles this summer, Breakfall recently announced that it will release its mecha action game Pizza Titan Ultra to the console on August 21. In celebration of the news, we got to talk with co-founder of Breakfall, Mike Keogh, about the company as well as some updates about the game.

Pizza deliveries? On robots? Sign us up! What was the inspiration for Pizza Titan Ultra?

Haha, yes! We loved the theme basically as soon as we proposed it. We were talking about different game ideas and things we loved, and pizza delivery and giant robots came up as separate ideas. Then we started talking about how we were successful with neon narwhals jousting in space. We sort of realized no level of silliness was off the table and combined the pizza delivery thing and the mecha thing and there it was. Still took a while to build a great game out of it, but we were still laughing at the premise long after it was proposed.

I can see how Saturday morning cartoons influenced the game. Were there any standout cartoons or shows you watched as a kid growing up?

Everyone on the team has different favourites! Personally, I’m a big fan of Transformers. But we had some Gundam fans and people who brought up Evangelion from time to time too. We looked at clips of pretty much everything you could imagine, though. After it was brought up a million times at conventions I also promised myself to watch Megas XLR too, which I’ve now watched a lot of clips of, but have yet to see a full episode. The vibe of that show is very Pizza Titan Ultra, though!

Pizza Titan Ultra has a colorful cast of characters, but which ones are your favorites?

I love this cast so much it’s hard to choose. I was seriously about to say something that’s kind of a huge spoiler for our “big endgame plot twist”, but I’ll just say that Billy the delivery boy is a favourite. I’m also really fond of our rank and file villain henchmen, the cheezbots. Fun fact: Cheezborg wasn’t always our villain, and the cheezbots weren’t always mouse-themed! So it’s especially plausible for me that Cheezborg hijacked them and slapped on the ears and other mousey features, because for about a year none of the robots or tanks had those! But the idea that they hate fighting a pizzeria, and especially hate losing – they just think this whole mission is terrible – I love that.

What aspect of the game do you think players will enjoy most about Pizza Titan Ultra?

We’ve brought this game to a lot of shows and tuned in to a lot of streamers playing it, and we have a pretty good sense of the answer to this. And it’s a great question, because the answer isn’t straightforward at all. Different players love this game for completely different reasons. We’ve had people tell us that the gameplay is amazing and one of the best mech-based games they’ve ever played. But those people might be barely skimming the story. Then we have other players who are so into the story! They just love the world and the characters and the humour. They are literally playing to see the next crazy VIP customer come up, and couldn’t care less about how much they earn in a mission. Some people are really into the customization, some love the challenge levels. It’s really all over the map, but it’s pretty great to see that your game caters to different tastes at the same time!

The game has enjoyed a PC release for a while now, and it’s coming to consoles soon. Were there any challenges in porting the game over to PlayStation 4?

Optimization was a bit of a challenge. People look at this cartoony, top down game, and they’re a bit surprised it takes so much power to run. But we have a highly destructible city, and as more and more enemies swarm in, with all the projectiles, it gets to be a lot for the engine to manage. We also had some problems with third party plugins saying they had support on various platforms but then did not. I will refrain from calling anyone out at the moment, but it’s scary trying to get your game finished and then finding out important pieces of technology crash consoles. Our core team is four people, so this is a big game for us and you really feel those sorts of setbacks.

Speaking of PlayStation 4, your previous game STARWHAL is currently available as a pre-order bonus. How has your studio changed since the release of that game? How did you come up with a single-player concept coming from a multiplayer party game?

Funnily enough, our first game was Marvin’s Mittens, which is single player as well. STARWHAL was more the anomaly, though we’re very thankful we made that! We started as a bunch of friends making games for fun. STARWHAL gave us the opportunity to really start the company in earnest and get people working on our own games full time! Since STARWHAL we got an office and have meetings and do serious business game development. An office is great because it gives us a way to centrally store all the candy we eat. But back to the question I think we like working on both. We’re a team of incredibly varied tastes, and for future projects we actually already have prototypes of the multiplayer and the single player flavours.

How has selling your games on digital marketplaces helped you as a developer?

Making small, weird games, it’s hard to say physical media would have even been an option! For indies, digital is often the only path to market, so it’s vital. That said, the landscape here changes fast. Steam has sort of opened the floodgates, so it’s much, much harder to stand out in the crowd. It’s technically easier than ever before to make a game and get it into the hands of players, but simultaneously the most competitive market for attention from players ever.

Of course we’re going to have to ask: What are your favorite pizza toppings?

I think we all like pepperoni. Mixed feelings on pineapple, depending on who on the team you ask. Three out of four Breakfall staff are hot sauce fiends, so we went through a lot of sriracha sauce on various pizzas.

Will we get any post-launch updates for Pizza Titan Ultra after the console launch? Perhaps something for STARWHAL?

We’ve made a lot of improvements to the game during the porting process that the PC crowd will eventually enjoy. A lot of game balance and small tweaks, and a huge update to the soundtrack that we couldn’t get ready in time for first launch. In terms of after that, hard to say where we’ll be headed. As I said above, we already have some prototypes we’re figuring out what we want to do with.

Finally, any last words to our readers or some fun little pizza facts?

Get your favorite pizza joint on speed dial and stay tuned for more news here on Gaming Trend.