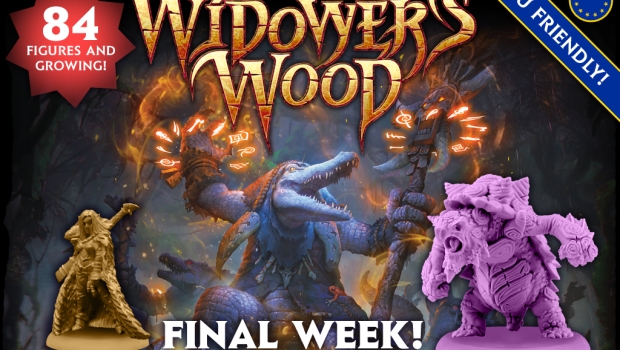 When it comes to massive numbers of figures for a Kickstarter project, often CoolMiniOrNot and Soda Pop Miniatures come to mind.  While you wouldn’t be blamed for that, another company well known in the miniatures gaming market has entered into the Kickstarter fold.  Privateer Press, known for Warmachine, Hordes, and Monsterpocalypse, is funding Widower’s Wood, a cooperative game set in the Iron Kingdoms universe.  While it has been a very successful project, it ends this week, so I wanted to find out as much as I could before it ends.  I contacted them with eight questions.

Who are you, and what is your relation to Widower’s Wood?

I’m Will ‘Oz’ Schoonover. I designed and developed Widower’s Wood, The Undercity, and the LEVEL 7 games.

Last year The Undercity was released, which was also set in the Iron Kingdoms universe. What makes Widower’s Wood different?

The heroes and villains are all different. The map and tiles represent different kinds of terrain, so they are significantly different. It has a unique campaign as well. In addition there is a new tactic for the villains and some new rules to represent how these characters work compared to those in The Undercity.

Does the game include stand-alone adventures or will there be a campaign where players level-up the characters after each mission?

The core way to play the game is to start with the first chapter, which is what scenarios in the Iron Kingdoms Adventure Boardgames are called, and play through the entire campaign. In between each chapter heroes can spend XP to buy new ability cards, developing their characters to fit the way they want to play. That said, any chapter can also be played as a one shot by simply deciding how much XP the party has to work with and building characters to that amount.

What’s the difference between the red and blue figures?

The majority of the villain figures in the game are red or blue. It is part of the villain AI. When you spawn a villain, or activate them based on the card drawn at the end of each player’s turn, you choose between red or blue figures based on a few simple rules.

We haven’t finalized our post-campaign retail plans yet, but we’ll have news about that later in 2016.

Will Widower’s Wood be compatible with The Undercity?

Yes, they use the same core mechanics. You can play any of the heroes in either game, and villains can be used in a variety of ways. There will be rules for adjusting gameplay based on mixing components and we will continue to support the game in our No Quarter magazine with scenarios that use a variety of components.

Privateer Press also owns the Hordes IP. Might we see some kind of Hordes-based adventure game?

When do you expect this to be released?

Beyond our reward delivery date of January 2017 we don’t have information beyond that for release.