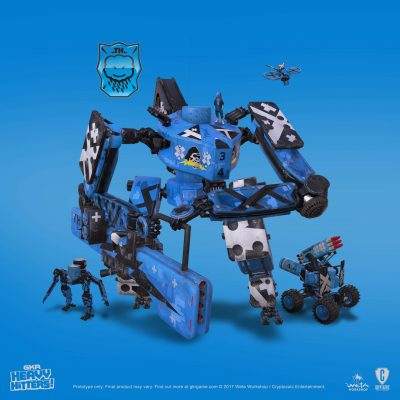 When I was at Origins at the Cryptozoic booth, I saw a giant mech statue.  While awaiting my appointment I started talking with someone who was very excited to tell me about the project he was working on, and it happened to involve the giant robot statue.  He showed me the models they had already made and started describing the game a bit.  I later learned that was Ike Hamon of Weta Workshop, which surprised me since Weta isn’t exactly known for designing games.  With the Kickstarter launched I got a hold of Weta Workshop and asked them eight questions.  The answers are a collaboration from the GKR team of Paul Tobin, Leri Greer, and Christian Pearce.

Weta Workshop is known for special effects and props. Why develop a board game?

Weta Workshop is a very diverse creative company. While our core business is concept design and practical effect manufacture for the film and TV industries, we relish the opportunity to take on new challenges. As a company, we also aspire to partner with our talented crew to produce unique intellectual properties and stories. Boardgaming is one great way that we can tell these stories.

How long has work on Giant Killer Robots been going on?

Our involvement in the project began around two years ago. It all started with a simple concept: create a board game with large robot minis. Early on we developed a world around the robot battle premise, including the premise that this is a spectator sport run by corporate factions fighting for salvage rights, as well as characters and their backstories. We also developed the art style around the game, including the Heavy Hitters and their Support Units, the card art, the Pilots, and all the faction logos. Because we’d never designed a board game before, we brought on Cryptozoic early on and gave them the bones of the world we’d created. Their designer Matt Hyra designed a really fun game with the world we gave him! As we continued work on the project, we began to engage with our own fans at conventions, and we even did a tour of board game stores around the States to playtest and get feedback. It’s been an awesome two years and a lot of love has gone into making GKR: Heavy Hitters the best it can be.

There’s a large difference in scale between something like MechWarrior and Heavy Gear. The Heavy Hitters look absolutely towering in GKR. What kind of scale are we looking at?

In terms of the minis that feature in the game, the largest of these is King Wolf which stands at 139mm. You get four Heavy Hitter figures, which are between 96mm and 139mm, and then 12 Support Units which are smaller.

Was the design from a project you created models for and never came to fruition, or did Weta create the design because of team interests?

Definitely team interests. When we create designs for a film, those designs belong to the person who hired Weta Workshop’s design services, so they aren’t ours to reuse. But GKR represented an incredible opportunity: to champion the original work of our artists.

The miniatures are huge. Why make them so large?

Weta Workshop has run a collectibles division for more than 15 years, and we have a lot of experience with crafting really high quality figures. We knew this was something unique that we could bring to the table, offering highly detailed and fully painted collectible-quality figures combined with an awesome tabletop game.

Where did the idea to incorporate advertising into the gameplay come?

We wanted something that differentiated our world from existing robot battle properties. Often it’s robots engaging in high-stakes combat or warfare, and we thought a fun point of difference would be to make it a sport—something that happens for entertainment of the masses. It also gives an in-world explanation for why you can play over and over, because the pilots don’t die when a Heavy Hitter is defeated. So the advertising came out of that sports-themed, entertainment-driven world. There’s a lot of corporate sponsorship in contemporary sports in the real world, so they fit right in, and creating these bright and colourful corporations was a way to have a lot of fun designing the game and the world of GKR as well as poking fun at modern-day consumerism.

You’ve included pilots in the game. What’s the difference between the ones included in the game?

Each pilot has a unique skill listed on their card. Their skill will give them a leg-up in certain areas, and it gets interesting when you have different combinations of pilot skills and the different abilities of each robot faction.

From a story standpoint, each pilot has their own backstory and personality, which we think helps create a strong connection with the character.

If you do expansions for GKR, have you discussed if you will have a Heavy Hitter expansion and a separate pilot expansion, or would you release expansions that are a mix of the two?

There have been a lot of suggestions from backers about the kinds of expansions they’d like to see. We have some ideas of our own about expansions we’d like to make, but we’re waiting to see how the Kickstarter goes before we decide what to do first.

I will say that GKR: Heavy Hitters looks absolutely incredible.  While we’ve had hex-based games with fantasy figures and military forces, mech-based games are few and far between.  This looks like a fun game without the complicated ruleset of Battletech.  Be sure to get in on the Kickstarter before it ends.