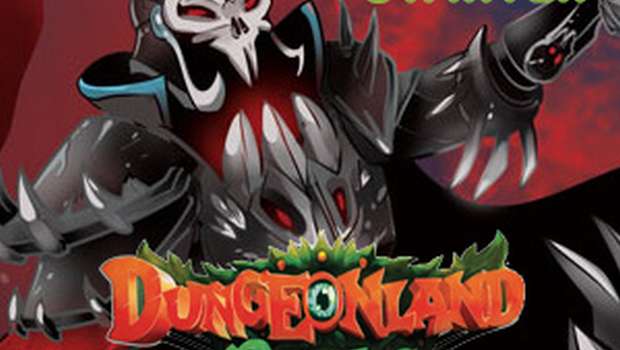 Dungeon crawlers seems to be a hot commodity right now.  They range in complexity and player count, with some taking place in fantasy settings while others take a sci-fi bent.  Now Mage Company has 12 Realms: Dungeonland on Kickstarter.  I sent them eight questions to find out more about the game.

What games have you developed so far?

Since our collaboration with Mage Company we’ve been working on several projects including The Carrotia expansions, Aether Captains 2.0 rules and expansions and the free scenarios provided every month from our site for 12 Realms and Raid & Trade. Right now we are working on our biggest project yet 12 Realms: Dungeonland.

How did it come about that Dungeonland would be set in the 12 Realms setting?

One of the strongest aspects about 12 Realms was its theme and the way it was implemented into the game. After many expansions, the 12 Realms setting started taking shape and we realized that as a setting it is only limited by our imagination, so we decided to expand it even more and introduce it to the Dungeon Crawl scene. Our feedback from the players also suggested that a Dungeon Crawler set in the 12 Realms setting would be a perfect match and of course we share in their enthusiasm.

Dungeonland looks a lot darker than previous 12 Realms games. Are you aiming for a darker tone?

Initially it was not our intention for the game to have a darker tone, but due to it being a Dungeon Crawler the theme went into a darker direction and we quite liked it. So we embraced it and developed the game around a dark time for the 12 Realms setting, where the heroes face one of the greatest threats in the history of the realms. Of course the game still keeps its strong fairytale feeling.

How does Dungeonland differ from other dungeon crawler style games?

The obvious difference anyone will notice is its theme since it’s the first Massive Dungeon Crawling game with a fairytale theme. Apart from that, the game introduces some new features and elements like its Exploration, Glyph and Time systems. The game offers a unique experience with 3 different modes, the Campaign, Epic Quest and Arena all of them included in the base game. Above all, we try to make our gameplay match our theme and offer players an oldschool arcade feeling.

What are the custom dice used for?

The custom dice are used for combat and looting. Both players and monsters use the same kind of dice for attacking and defending with heroes and some bosses also use them in various different ways, like casting spells where the Glyph system we mentioned is used.

How many scenarios do you plan to include with Dungeonland?

Like we mentioned already, the base game will include a Campaign consisted of several scenarios as well as the Epic Quest which basically gives the experience of a Campaign in an one-gaming session and has infinite replayability. Of course we will expand upon those with feature expansions.

Are the scenarios separate from each other, or is it like a campaign with the characters gaining experience as you play through them?

A campaign is included in the base game of 12 Realms: Dungeonland with the scenarios connecting to each other and unraveling a branching story with multiple different endings depending on the players’ choices. Each of those scenarios can also be played as a standalone scenario. Characters start their adventure with a few items and very little experience and as they progress through the campaign they will gain more items and skills with many options allowing players to customize them to their liking.

Telling us that, is like asking us to let you have a peek inside The Pandora’s Box, the things you would see wouldn’t let you sleep at night. ☺

Be sure to check out the 12 Realms: Dungeonland Kickstarter page for more information.