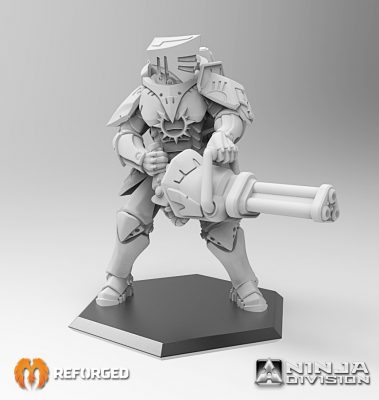 Designers who work for an established company often create great games, but sometimes they have to work within specific properties and guidelines.  With Kickstarter, it’s easier to make a game and publish it, as long as you have enough backers.  Recently Warforged: First Contact caught my eye, especially since Ninja Division was making their figures.  I got the chance to ask Tuomas Pirinen eight questions about Warforged and their current Kickstarter.

Who are you and what is your experience in the gaming world?

We are Andy Chambers and Tuomas Pirinen, and we have a combined experience of 50 years in the games industry. Between us we’ve worked on tabletop games such as Warhammer 40,000, Warhammer, Necromunda, Mordheim, Starship Troopers, Starcraft, Space Marine, Epic 40,000, Dropfleet Commander, Battlefield Gothic and many, many others. Many other people are involved in the project, such as artists Neil Roberts, Des Hanley and John Wigley, each with a formidable experience in the gaming industry.

You claim that Warforged: First Contact was inspired by Space Hulk. How does it differ from that game or something like Level 7 [Omega Protocol]?

With us both being ex-GW [Games Workshop], we are of course intimately familiar with Space Hulk. I think the biggest differentiator is the card-driven turn system, where you shuffle the cards of all units into a single deck each turn and play the combat in the order the cards are draw. The second is the combat system itself: all the attacks, special powers and other stats are self-contained within the command cards, and the custom dice decide when special attacks are triggered.

Is the game skirmish based, or will there be a campaign included?

There is both a scaling free Exploration mode that can include as many or as few units as you wish, and there is also a narrative Campaign, crafted (amongst others) by the great Ryan Miller.

You use hexes on the board. Why use those instead of squares?

Hexes offer finer granularity for a game with lots of shooting, and allow for more units to pile into melee. The choice was really based on the playtesting –the game was far more fun with hexes!

You have three different sets of dice: balanced, offensive, and defensive. Are the different units assigned which dice they use, or is their use determined by the situation they are in?

They are assigned to each unit according to the weapons their carry and their physical attributes. However, there are many situations in the game where planetary conditions, special scenarios, or upgrades earned by the units can modify which dice each trooper or a Hero uses.

It looks like some units improve throughout the game. How will these improvements affect the units?

For the Iron Legion, we have a unique system called Decorations. Each time the Faction you control slays a certain number of enemies, he or she earns a new Decoration (such as the fabled Iron Sun) and can then immediately apply the boost associated with the Decoration to all the units you have. The catch? You can only have one Decoration active at a time!

How did you end up working with Ninja Division for the miniatures?

The classic way –the Ninjas ambushed us in a gaming convention and demanded we work with them! They did it in such a nice way thought that we said yes.

If you are successful, can with expect expansions with new units for the current factions or even new factions?

We plan to bring many new heroes, factions and units into the game both through Stretch Goals and expansions, and we would also like to refine the core rules into something that can customized to handle bigger battles.

It’s not surprising that the figures look great, but it looks like they’ll have some unique gameplay as well. You can back the Kickstarter now, and it’s only a two week campaign so you’ll want to back it now.  It’s just about to hit its backing goal, and the stretch goals look great!