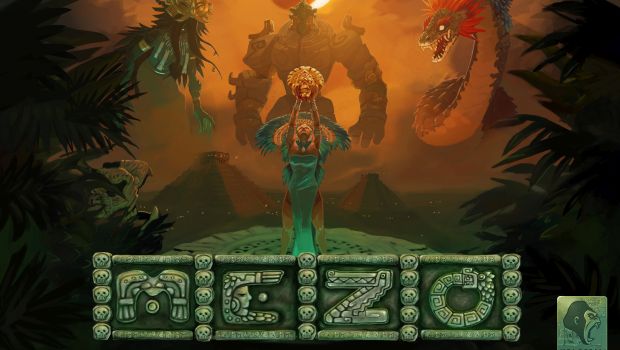 When you look at ancient civilizations, it’s not uncommon for Greek, Norse, and Chinese mythologies to be used as backdrops for gaming.  The Mayans aren’t used very often, and their mythology less so.  However, when looking at the Kickstarter campaign for Mezo, it was easy to see the designers did a lot of research on the setting.  I wanted to find out more and got Travis Chance, President of Kolossal Games, to answer some questions for me.

Was designer John Clowdus nervous about creating a “big box” game compared to his previous games?

Quite the opposite. It was something he always wanted to tackle. In particular, John plays minis games like Warhammer. He has a shop table downstairs in his house full of minis he’s painting. I too was under the impression he just played card games, but the reality was that is simply the style of game he was making with Small Box–that and they’re much more realistic to print domestically. Mezo is John’s chance to show off his design chops without limits.

The Mayan civilization is a theme that isn’t used very often. Why did you decide to use this theme?

Funny story. I pitched John the idea of making a techno-Egyptian theme that was a love letter to the TV show Ancient Aliens. I thought it might be interesting to use that as a theme, similarly to what Lords of Hellas did with Greek mythology. John has a penchant for tackling the less obvious, so the word “Egyptian” was enough of a turn-off for him to propose using Mayan culture. Their gods were lethal and interesting. The culture was ritualistic, a blood culture. Like the Egyptians, they built megalithic structures. John imbued a lot of interesting historical and cultural elements into the game from his love (and education) of history.

Several gods are included in the game. Are all of the powers they have asymmetrical?

Fundamentally, the gods operate under the same rules. There are a few that wildly diverge, but for the most part the asymmetry is in their action deck and call ability they get to use each age. Each god approaches the game differently. Ah-Puch smites units, sending them to Xibalba (the Mayan Hell of sorts). Etznab bring them back from that same place. Cabrakan moves units around the board, while Kukulcan and Ixchel have dedication to specific loyalty types and can deploy units better than any other gods. The differences are subtle and massive at the same time. Each god fully explores a vector in the game, making them specialists of sorts.

A two sided board is included. What is the difference between the two sides?

Purely aesthetic. One is topographical of the region. One is decorative, showing off the culture.

The area control doesn’t seem to be combat based. Why did you use pure numbers to determine who gains advantages from the conflict?

The game is primarily conflict-driven. John baked in some vectors like a devotion track and area scoring for pyramids, which players need to manage to some extent to win, but the heart of the game is in the conflicts. Where in most area control games players spend a lot of time positioning into regions to trigger or initiate a fight, Mezo skips right to the conflict itself. Players do all the moving during the deploy step, wherein they may place their champion or up to three units in any combination of warriors and shamans into regions. The gods themselves and their cards are what alter the conflicts, which start largely very close at the beginning.

Conflicts are resolved first by who has the most raw strength in the region. Warriors and shamans contribute 1 strength each, while champions contribute 2. Whoever is strongest gains the altar, or scoring bonus, for the region. But the twist comes next. There are unit majorities, which offer points and amazing bonuses. Whoever has the most shamans in the region takes on and places it on the Immortal Calendar, gaining the powerful bonus effect. The same is done for warriors on the Heroic Codex. So there are three ways to win in each conflict.

What happens when there is a tie?

If there is ever a tie, the player whose champion is in the conflict arbitrates, adding a nice little diplomatic aspect to play which functions as a catch-up mechanism most of the time as well.

Is movement simultaneously done, or will players move in turn order and decide their movement then?

There is no movement, per se. Rather players deploy during a step at the start of each age. It cuts out the preamble and procedure of movement, which is a really interesting part in the design. John always tries to simplify and get to the fun parts of the game, which is something I have always admired about his games.

How difficult was it to balance the different powers of each of the tribes, especially with so many available with the Kickstarter campaign?

The tribes themselves have no differences. There is a small variant which grants each tribe, each which has a different animal totem, a once per game ability, but out of the box the gods are where the asymmetry lies in the game. They were tremendously hard to balance, as each is so very different and has 11 different options on their action cards. With 12 gods, that’s a lot of work, but we put in the time and the end result is fantastic.

There’s still a short time to get in on the Kickstarter campaign, with a high probability of late pledges.  If you want a game with high interaction and a unique theme, then don’t hesitate to look at the options available to support Mezo.