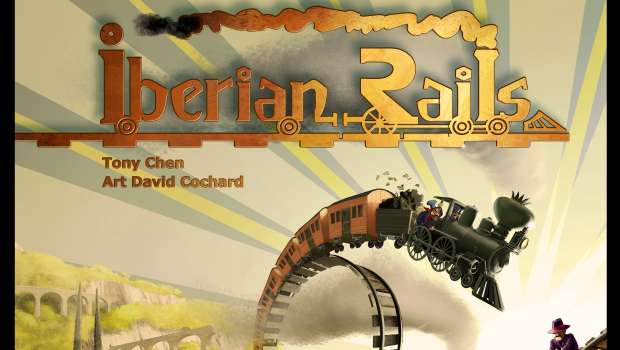 Board games use the theme of trains often.  From Ticket to Ride to Steam, riding the rails or building a rail empire bring gamers to the table often.  Now Iberian Rails is set to take on the train genre with its current Kickstarter campaign.  To find out more I asked eight questions  to designer Tony Chen.

Who are you and what is your background in gaming?

I started playing modern board games around 2006, after discovering boardgamegeek and a game club called Berkeley Board Gamers. Ten years later, I am still playing.

Where did the idea for Iberian Rails come from?

From playing a lot of Imperial, Chicago Express, and believe it or not, Modern Art. In order to become better at these games, I analyzed them and realized that they can all be broken down into a system of cash flow revolving around three essential steps: share acquisition, value adjustment, and payout.

I studied the nuances of these different cash flow systems in order to understand how to use them to my advantage in games. In the process, I learned that subtle differences can have a huge impact on gameplay! So I started thinking of other ways to structure cash flows. Iberian Rails is an implementation of one of those ideas.

Why set the game in Spain?

I visited Spain in late 2011 and loved it. When I started developing the game in early 2012, Spain was fresh on my mind.

What does Iberian Rails do that differentiates it from other train games?

Another difference is how the companies are characterized by the number of shares that they have. The fewer shares a company has, the quicker investors can get return on their shares. However, companies with more shares tend to grow for longer. This is all due to the unique cash flow system of Iberian Rails.

Where did you come up with the idea of companies taking turns in a specific order instead of the players?

I gave it away above. Basically Imperial. Also, given the nature of the cash flow system I used for Iberian Rails, company-based turns makes a lot more sense.

Why include both open and closed auctions in Iberian Rails instead of specifying a particular one?

To give the players a choice between boosting the long term growth of his company, or cashing out now. This is a very important decision in the game, actually. The better choice depends on the situation and how the player uses it.

By the way, if you think about it, the closed auction is similar to a Modern Art auction: one player pays another player for a share.

How many characters are included and what do they do?

The characters come in to help the players take their turns as CEOs. For example, if I chose the Engineer this round, then all my companies can build tracks using the construction cost of the Engineer.

I want to point out that not only are the characters tested to be balanced between themselves, but the degree of specificity is also balanced for each character, meaning that each character is not too specific, nor too general-purpose. More explanation can be found here: https://www.facebook.com/notes/monsoon-publishing/5-things-we-did-to-balance-iberian-rails/823044654503810

Do you have plans for more maps and characters or other expansions if Iberian Rails is successful?

Yes, but none are being tested right now. The characters that would have been in an expansion are already available as stretch goals, and the board is already double sided with two maps. However, if Iberian Rails is very successful, we will consider designing more; but that will take time because we spend a lot of time testing our designs.

Want to know more?  Look at their Kickstarter for more information.  At this time there’s ten days left to back it!