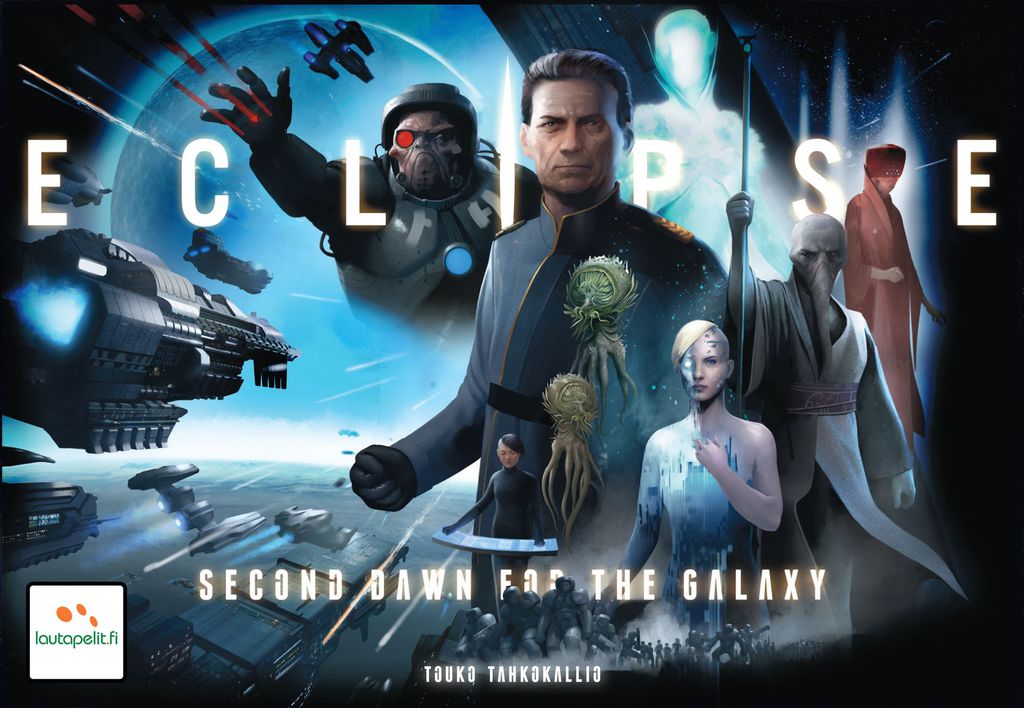 Often times when a game is successful, it will get printed multiple times, sometimes with expansions included.  However, there are times the designers go back to the drawing board to come up with a new edition.  That’s the case with Eclipse, and Kolossal Games has created a Kickstarter campaign to fund this new edition.  I was able to ask Toni Niittymaki of Lautapelit.fi eight questions to find out more about the game and the decisions behind it.

Were you surprised at the success of Eclipse throughout the past few years?

Yes and no. We knew we had a stellar game on our hands from the first 2-3 rounds of play, but as a new publisher on the world stage, we had no idea that a long and quite heavy game could sell that many copies.

Why go with a second edition instead of a reprint?

The short answer is, we wanted to make the game we felt it should be, and give the designer a chance for a redo, if needed. And in the end, he found plenty of things to adjust. The new edition is aiming to offer “the ultimate version Eclipse”. Not to be something totally new, just refined. It is primarily made for all the new people interested in Eclipse, now and in the future, but also for the old fans, who just want an improved version of the game they already like. We hope that Eclipse is a game that would stay relevant for board gamers for a long time and that we could support it with new expansions in the future.

Why use Kickstarter for funding instead of going straight to retail?

Kickstarter is not just a funding platform, but also a way for people to get their hands on projects that might be otherwise difficult to get. The first edition was done several years ago and it was not possible to do all the things we wanted back then (upgrade trays, miniatures, player boards with cube slots, etc). For the second edition, we wanted the production to be much more ambitious. To make the production value top notch also means a huge startup cost for the production. It is surprisingly difficult to estimate the demand for an improved version of a seven year old game. Running a Kickstarter campaign allows publishers to estimate the demand better and not run into financial trouble. one benefit for doing a Kickstarter campaign is that some of the more expensive component upgrades can be left for stretch goals. If there is enough demand for the game, you can open up new possibilities.

What changes have been made for Eclipse Second Edition?

Back in the days, when the first edition was published, we needed to do some compromises in the production. The player board in the second edition has been split into two different boards: the resource board with the places for the cubes and the two-sided species board. Another much needed addition to the game is a custom made tray for the Ship Parts. The tray for Ship Parts will cut setup time a lot and help to keep the tiles organized.

New rules include the first player to pass gains +2 Money, in addition to receiving the starting player marker. You can now claim Discovery tiles without placing Influence discs. It is now possible to move your ships through player’s territory without breaking the diplomatic relations. In average, the hexes are now bit better and more valuable than in the first edition. The Galactic Center Hex and few of the Species’ home systems have also been tweaked.  Technologies and species have also been tweaked.

Will the rules be streamlined from the first edition or use some rules found in the expansions, or will the rules for the second edition largely be kept the same?

There are multiple things that have been streamlined. Some best parts from the expansions have been brought into the base game, and some that didn’t feel that exciting have been removed.

Did you use any input from fans to determine what changes to make for the second edition?

Yes, both we on the publishing side and the designers have followed forums all this time. Over the years, there has been a lot of small suggestions from the fans, and the playtest groups. Of course, the game play changes have all been trusted to Touko and his co-designer Sampo Sikiö to decide.

Will there be some sort of upgrade package for owners of the first edition, or are there enough changes that it wouldn’t be feasible?

At this time there are no plans for an upgrade pack as part of this campaign. This was discussed heavily at the beginning of the project and is still being discussed today. The biggest issue is that almost all of the previous components changed in some way. This means that upgrade packs would’ve been a print of almost the entire 2nd edition. Since this was too close to what we were already printing it was held back.

Are you looking at possibly creating some new expansions after Eclipse Second Edition is published?

Absolutely. We have already started designing the ship miniatures for the existing expansion races (ones that can be adapted to the newly balanced 2nd edition world) and we hope to come up with completely new material down the road. As the expansion races get minis in the future, the first edition expansions will not return in the same format. Parts of them will return in one form or another though.

The excitement around this new version has built up for months.  If you haven’t gotten your hands on the original Eclipse, or you enjoy the game so much that you want to play this streamlined version, be sure to check out the Kickstarter campaign.  It’s fully funded with a few days left, and the game looks incredible.  If you are a 4X fan, you should have Eclipse in your view.