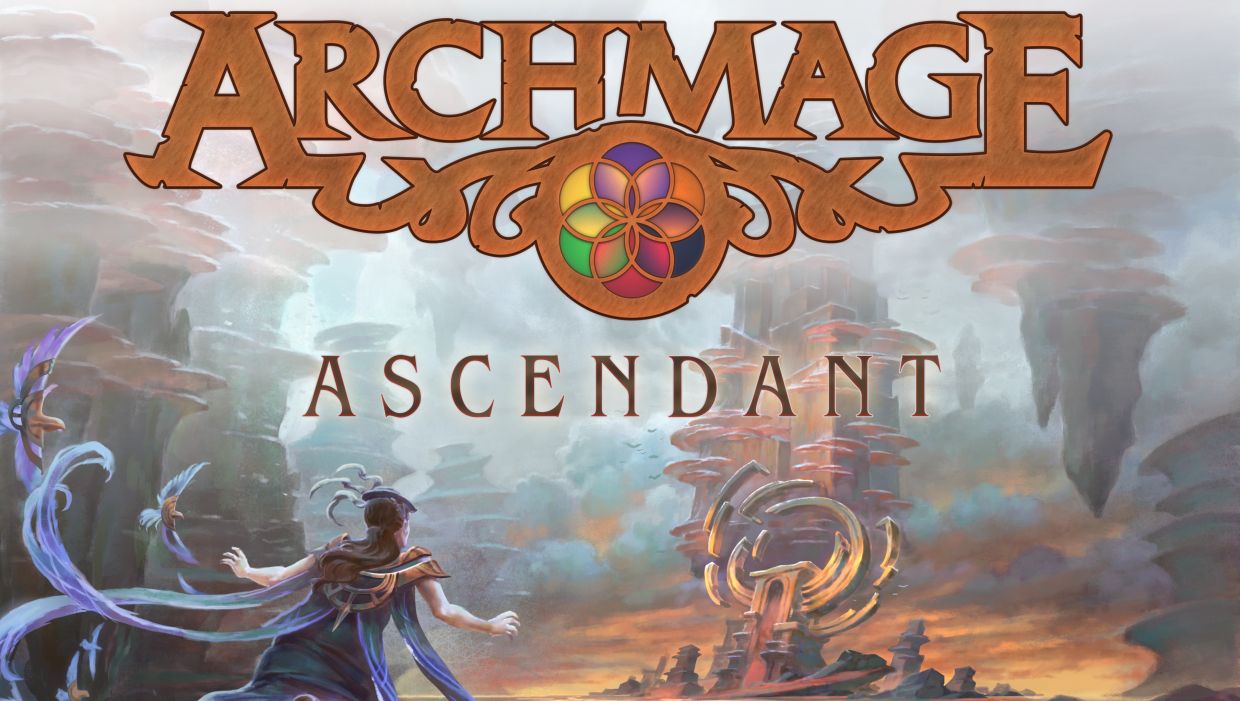 Sometimes looks can be deceiving.  A game with a hex tiles is common, as well as flipping them over to reveal terrain or resources.  However, sometimes you have to look away to see where the strategy lies.  That’s the case with Archmage, a game of exploration and dueling mages.  The expansion is currently funding on Kickstarter.  I had the change to ask eight questions to designer Tim Heerema to find out about the base game and the expansion.

The Tower Board really forces you to balance diversification against your spell power. How did you come up with this idea?

I like games with multiple paths to victory. As a gamer, I like the space to explore a game — to sit down and try a different strategy every time I play. And, if the game or my opponents have opportunities to trip me up on my way to achieving this plan, I find that increasingly enjoyable. I want to have an overarching strategy, but also to feel the need to tactically adapt “on the fly” to what’s thrown at me. To me, these two features are the heart of what makes a game fun to play over and over again.

Did you design Archmage to have six spheres of magic for balance reasons?

Archmage had six spheres of magic from very early in the design process. Eighteen spells divided into three levels seemed like enough variety to explore and make exciting combinations, without becoming too overwhelming for players. Initially, however, when I brought the game to Game Salute, the theming of each sphere was pretty thin. Through the development process for Archmage, these different strategies were explicitly grouped to make six spheres that actually feel very different from one another. Will you, as a player, be more aggressive or more defensive? Will you transform the relics you gain to suit your purpose or will you transform the land to get the relics you want?

Once this theming was accomplished, the focus shifted to rebalancing the game. We wanted to be sure to give players multiple viable options. Does the player want to specialize, or be a generalist, or fall on the spectrum somewhere in between? I wanted to get the balance of the game to a point where, if played well, one player can specialize early and push a strategy to the limit and gain a potential advantage against another player who does a bit of everything. But, the scoring system then pushes back. While knowledge of a Master spell gives you more points than knowledge of a Fundamental spell, there is a limited number of points to be had in each sphere. You must diversify to some degree by the end of the game in order to earn enough points for victory. I hope that this creates an element of tension within the game.

Why did you design Archmage to uncover the areas by flipping the hex instead of showing what each area contained during the game?

I generally dislike too much luck in the games I play. At the end of a game, I want to feel that it’s the series of decisions I made which caused me to win or lose, not random chance. So, there is very little left to chance in Archmage. There are no dice rolls in combat. It is a “Eurogame” more than an “Amerithrash” experience. It is a game of finding efficiencies in movement and resource management.

However, I did not want a puzzle that could be solved after numerous plays. Thus, the resources a player can generate for their growing Order of mages is intimately tied to their current map control. It is a system where the relative balance of the six types of relics you have in your possession can be constantly manipulated by both you and your opponents.

If the map started in an explored state, it would reduce the variability and increase the predictability of the puzzle. Players could look at the map at the start of the game and try to solve the puzzle before they started to play, and someone could try to build towards the same mix of spells each time they played. But, by forcing players to strategize each round with only partial information that gradually unfolds as the game progresses, I hoped to reward in-game creativity. A player must adapt to the relative abundance or poverty of certain relics as they play. If the game gives a player an abundance of lemons, will they make a business out of lemonade? Or will they find a way to go and take an opponent’s oranges…

How does Ascendant change the Archmage base game?

In Archmage, I was very intentional to give all players the same potential spell book. I did not want a CCG experience where your starting deck determines more of the outcome than the actual gameplay.

But, I found that players wanted more asymmetry in play. They recognized that every player ended up with a unique combination of the spells, but they wanted to take this concept further. They wanted to feel that the abilities of their mage were always increasingly diverse from all the other mages at the table.

So, in the expansion, the obvious starting point was a greater variety of spells. If a player can choose between two spell options when they initiate or promote apprentices, it’s another opportunity to explore new strategies and diversify from what is currently being tried by other players.

Then, it became logical to consider abilities that were only available to a single player each game. A lot of board game expansions immediately add asymmetric starting powers for the players. It was suggested to me over and over again… But the development team backed me up in my decision to buck this trend. Instead, we created the Places of Power — six unique locations that each grant a mage a unique ability for as long as they are controlled. Similar to possessing the same potential in starting decks, these locations are accessible to all the mages. You can have an ability that no one else has, but it cannot be taken for granted, as you may lose it to an opponent if they become too jealous of your power…

Finally, the other critique I received for the base game was that all scoring happened at game end. Some players wanted a gauge of success as the game played, and they sometimes felt aimless in their wanderings of the land. Thus, the idea for the Prophecies was born: I would give players some “mini-missions” that they could try to accomplish as they played. The hope is that this will address the voiced critiques, as well as providing an additional layer of strategy to the game.

The idea for cooperative play was definitely not there when I started. However, with certain play groups, I came to realize just how confrontational or peaceful Archmage could become. I revel in scrappy antagonism and the need to make strategic strikes on the way to victory. And to be honest, I was a little surprised by some play reports that went to the opposite extreme. A friend of mine specifically told me that he and his wife loved the mechanics of the game, but did not want to feel like they needed to be “at each other’s throats, lusting for blood to have a good time.”

When the solo version of Archmage was well received, it got me to thinking… What if the antagonistic elements of the game could be more fully directed against the Warlord? His movement mechanics do not allow a player to ignore him, so players would be forced into bloody battles. But, with a two-player cooperative mode, my friend and his wife could enjoy the mechanics without leaving the table angry with each other.

How does the game change between cooperative and solo play?

The cooperative play builds on the “bones” of the solo play.

First, I tried to smooth out the rough edges of the current solo experience. I replaced the two dice rolls that drive the movement of the Warlord with a deck of cards. A card makes for a very visual path, rather than the player(s) needing to determine (inner vs outer ring) and then (clockwise versus counter clockwise) travel. Just as importantly, it reduced randomness a little further. A set deck of cards with minimal reshuffling ensures that he will travel the map in a fairly equal distribution of paths. Dice rolls do not give the same predictability.

Second, the solo mode always had the Warlord in possession of all of his followers. I felt like I was missing some of the tension of managing followers that is present in the multiplayer game. So, I gave him a starting number of followers and the ability to gain or lose them each round. This allowed me to introduce a new “loss condition” — if the Warlord gains all of his followers out of the Supply, he wins. A new way to lose adds increased tension to the game experience.

Third, I wanted to make different difficulty settings for the cooperative play mode. I wanted to gradually introduce new players without having them get utterly destroyed by the Warlord. But, I also wanted experienced players to have an obscene level of difficulty available to them to keep things interesting.

Finally, I also put some concerted effort into developing a few spells that specifically increase the cooperative interaction between the players. We’re currently hoping to unlock some of these cards as stretch goals in the current Kickstarter campaign.

Ascendant has four different modules. Are they designed to be played separately or can you use any of them at the same time?

You can mix and match them all in any combination. They are fully compatible with each other, but each can also be used independently.

The only limitation is that the Prophecies module is not compatible with solo or cooperative play. Defeating the evil Warlord is your mission — this is difficult enough without any added distractions!

You could have created an expansion that just included new spell cards. Why didn’t you go that route with Ascendant?

There were some sleepless nights when I asked myself the same question! But, I wanted to try something new. I am very proud of the base game and how it plays, but I wanted to grow it into something even better. I wanted to make players realize that this game has the potential to bend their minds in new and exciting ways.

I like a challenge based in intelligent decision making. I hope those that play Archmage do as well, and I trust that this expansion will give them the opportunity to explore new puzzles.

The great thing about this Kickstarter campaign is that you can get the base game as well as the expansion bundled together.  Tim definitely has a lot of passion behind Archmage, and it shows in his answers.  Take a look and see if you are ready to claim the title of Archmage!