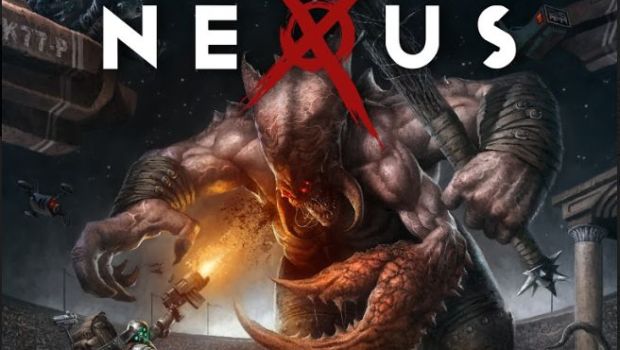 These days games seem to be repetitive, whether from theme or mechanics.  Sometimes a designer will tweak a mechanic to make it seem like something new, but in the end it doesn’t bring much new to the table.  When I saw Nexus, I knew that they had an ambitious project ahead of them, especially for a first-time publisher.  To find out more about the game, I talked to Tim Criswell (Communications Director), and designers Scott Rumptz and Jay Goike from D-Verse Publishing to find out more about the game.

Where did the idea for Nexus come from?

Jay and I [Scott] grew up together in Michigan and cut our teeth on Palladium games such as Teenage Mutant Ninja Turtles And Other Strangeness, Robotech, and eventually Rifts. We often modified the rules to make the game more fluid and to not get bogged down in the mechanics that didn’t matter to us. We eventually made our own home-brew 2 player game as kids that we played a lot. Fast forward 20+ years and we decided to remake the game we created and loved to play as kids but with adult components and humor.

It looks like it is a strategic battle game. Why do you call it a role playing game?

Nexus has two different modes it can be played. In death-match mode it is a 1 v 1 arena combat game where the arena is trying to kill both of your fighters. This is a one-off mode and can be picked up easily within a few minutes of play. There is also a legacy mode which allows you to build your character over time, build fame and reputation, gear up your fighters, and make a name for yourself in the Nexus. There is tons of lore and art in the 200 page lore/rulebook which immerses the player into a roleplay like experience.

Have you found it difficult to find people to become nihilistic when playing the game?

Actually, no. People seem to really enjoy playing the role of a Lanista which is a sort of manager that barks orders at their fighter Helot. The Lanista doesn’t necessarily care whether their Helot lives or dies as long as it puts on a good show for the fans which earns them more rep and fame. When players learn a little about the lore and the fight begins with floor saws ripping across the arena, the players are instantly immersed into a world where these types of spectacles are commonplace and accepted.

Is Nexus meant to be played in a campaign setting or is each game separate the each other?

In its current form, each match of Nexus is unique offering a completely different experience each time it is played. Nexus has self-generating narrative which is a fancy way of saying after each match, there will be a unique story told by both players. There are also other modes being worked on including a solo mode, battle-royale allowing multiple players, and a campaign. Expansions for Nexus are already in progress and fans can look forward to more and more in-depth and RPG experiences from D-Verse Publishing, LLC.

Movement seems to be more than moving your character. How is movement handled?

The players are the Lanistas and not the fighters themselves, they are standing on a type of hovercraft above the arena called an Aeres. They are yelling down commands at their fighters which have the attention span of goldfish. Not every command gets through which is why at the beginning of the round, the player rolls a D6 to determine how many Action Points their Helot receives that round. They will then use those action points for things like movement and fighting. Positioning in Nexus can result in increased damage being done to one’s opponent making it an important feature in the game.

How does combat get resolved?

Combat is determined by the motivation of each Helot. They each have their own unique abilities and specializations but all of them have the ability to do Wild Attacks, Normal Attacks, and Focused Attacks, each with their own Action Point cost. Once an attack is declared, both players will roll their respective die based on their character sheet for offense/defense. If the offense is higher than the defense, the attack lands and the damage is the difference between the two plus or minus any damage modifiers on the character sheet for the specific Helot. Nexus utilizes a Sliding Dice Scale to determine if a player has an advantage or disadvantage that can also affect the ability to land a hit and modify damage done.

How do you get each player to have relatively the same strength when they have different abilities?

Helot health along with their abilities have been tweaked throughout play testing for balancing purposes. However, some Helot motivations are going to be more powerful than others requiring their opponents to maneuver and plan their strategy carefully. As players get more experience, they will learn the strengths and weaknesses of each Helot motivation and adjust accordingly. The great equalizer is the arena itself though. One opponent can be dominating the fight only to find themselves in the path of a floor saw and the tides can change quickly.

What makes the Nexus Kickstarter campaign different from other games?

Nexus is unique because it is designed for quick setup and looks great on the table making a high probability of your friends asking about it. You can then teach them the death-match mode to in minutes and be laughing in no time. After your friends learn the game, you can start playing the legacy mode where both of you can build your Lanistas and troupe of Helots in a RPG style world where you can leave off and pick up at any time in the future. The game is both innovative and nostalgic and is designed to have both players laughing with every match win or lose.

Their Kickstarter is up and running to try to get Nexus funded again.  Be sure to check out the Kickstarter page to see all the miniatures, but be warned that the game is self-rated as Mature and it’s easy to see why.  However, if the idea of the game intrigues you, go and back it while you can.