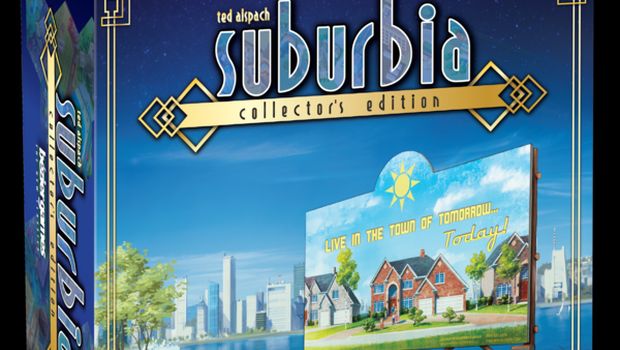 Bezier Games is probably most well known for their One Night Ultimate Werewolf and associated games, but one of their initial titles was Suburbia.  Creating the most attractive city with hex tiles became such a hit that a couple of expansions came out for the game.  It’s been a while since anything new has been released for Suburbia, but Bezier is changing that with a new Suburbia Collector’s Edition, which is currently funding on Kickstarter.  I got to ask Ted Alspach eight question about Suburbia and this new edition.

What do you attribute to the longevity of Suburbia?

We’ve found that the basic underlying mechanic of creating your own city, and the satisfaction of having some deliciously-placed combo’s, appeals to all sorts of people. For a game that has a lot of math going on, players are really invested in making their borough successful in all areas. And after you play, there’s always that “I can do better next time” feeling that gets the game to the table again and again.

Why publish the Collector’s Edition now?

Suburbia was our first big box game, and since that time Bezier Games has grown quite a bit. We have some more resources at our disposal and the experience to put out better games than we did all those years ago. I still love playing the base game of Suburbia, as well as the different expansions, and I always have felt a little pang of guilt that we weren’t able to give this game a better edition than what we did initially.

We were able to take our time planning and designing this edition, probably as much as we do for a brand new big box game, and we really wanted to make sure we got everything right. The Artwork, for example, has been in progress for almost 18 months, and the results are pretty stunning.

How different is the Collector’s Edition from the original?

Absolutely everything except the gameplay has been upgraded. Every component is better, the graphic design and artwork is better, and we’ve added all the existing expansions plus a brand new one, and these great new city tiles.

Do the cities only represent different colors or do they change the game?

Why change the population board significantly?

One of the biggest complaints with the original edition was the zigzagging scoreboard. Our graphic artist totally reimagined the scoreboard as a subdivision, where each plot of land is a space, and the original’s red lines have been replaced with houses with bright red roofs. And it goes up to 170 instead of just 150, so if you’ve got a particularly amazing borough, you don’t have to wrap around to the bottom of the board.

Will the expansions have separate storage areas in the Suburbia Collector’s Edition box?

Yes, everything is being stored in incredible Game Trayz storage containers, that separate tiles by expansion. And the expansion tiles also have icons on them indicating which expansion they belong to (a big oversight in the original Inc. expansion).

Why change the player colors? Did the older version cause problems with people who have colorblindness?

We wanted to give players more options for the color they like, and the colors their friends who play with them like. Instead of doing what everyone else does, and giving you five colors (all of which must be used when you play 5-player), you get to pick exactly which five colors you want in your game. So my game might be more traditional with yellow, purple, red, black, and green, but yours might be a little bit more unique, with burgundy, teal, salmon, white, and slate.

Is there a possibility we’ll see Werewolves, Vampires, Aliens and Supervillains in Suburbia in the future?

In the new Nightlife expansion, one of the A stack buildings is a werewolf den. Werewolves appear to be able to provide you with income through whatever it is that Werewolves do, though the downside is that they do eat people…

That does sound like quite the downside, but dinosaurs eat people on Dinosaur Island and those parks seem to be successful as well.  Be sure to head over to the Kickstarter page for Suburbia Collector’s Edition.  Even if you have the original game with expansions, this look like a significant upgrade.