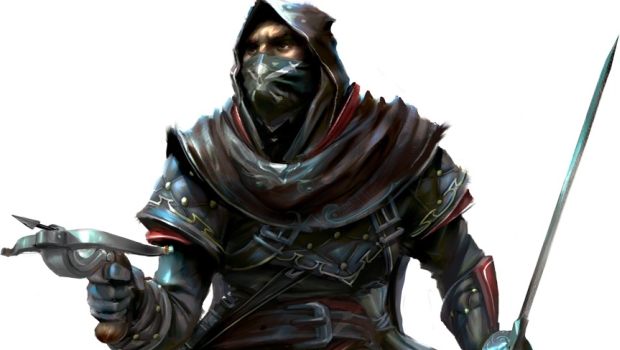 One of the traits of the Pathfinder system is known for being able to take multiple classes and mix them together.  Right now Paizo is in the middle of a new playtest for a new class, the vigilante.  I was able to ask Stephen Radney-MacFarland about this new class.

Who are you and what is your background?

Jason Bulmahn, Pathfinder’s Lead Designer, would normally answer these questions, but he’s on a secret mission to Brazil, to help launch the Portuguese language version of the game. I’m Stephen Radney-MacFarland, his faithful sidekick (sans the short shorts and the loud colors; it’s just T-shirts and jeans for me). I’ve been a member of the Pathfinder Roleplaying Game design team for nearly five years and worked on the game as a freelancer before that. Prior to joining Paizo, I worked on Dungeons & Dragons and the Star Wars Saga Edition roleplaying game.

How did you come up with the vigilante class?

When brainstorming new classes for the Pathfinder RPG, we always look for strong character concepts we know people want to play but are either not featured or only covered tangentially within the current rules set. We’ve developed a few archetypes (sort of mini-classes that you can latch on to one of your classes) in the past that somewhat cover what the vigilante does in a limited way. The mysterious avenger archetype for the swashbuckler class apprearing in Advanced Class Guide is an example of this. When we started to brainstorm and outline Ultimate Intrigue, we centered on those ideas as the best fit for the class appearing in the book. Thus, the vigilante was conceived.

Will the vigilante’s stats change depending on the character’s current identity? For example will we see an increase in Strength due to adrenaline while a vigilante is in his secret “vigilante” identity?

No. We played around with that idea early in the class’s development but discarded it for a couple of reasons. First off, we didn’t want to slow down the game by forcing you to refigure your character’s statistics each time your vigilante swapped identities. Second, when a member of the class appeared as an NPC in an adventure or a supplement, we didn’t want to have to present two statistic blocks—one for the rather mild-mannered social identity and another for butt-kicking vigilante identity.

Instead, the vigilante has a small number of statistical changes when switching it identity, and none of few if any of them dramatically changes the numbers on your character sheet. Instead, each identity comes with some talents, and you can only use those talents, or it is easier to use those talents, when in the appropriate identity. To use the superhero analogy, many times a superhero’s power don’t diminish when they are in their everyday identity, but those superheroes are careful not to use them when they don’t have the mask on.

The Ultimate Intrigue seems to focus less on combat and more on roleplaying and story. Was there feedback that there was too much focus on combat recently?

In many ways, the division between story and combat is a bit of a false dichotomy. Pathfinder is a game about creating exciting fantasy stories, and while much of that excitement comes in the form of combat, we always aim to provide the best tools for creating other forms of exciting and fun play. Early in Pathfinder’s development, we created the very popular chase rules, and many of our Adventure Paths and other adventures have presented numerous ways to challenge both players and their character without combat. Ultimate Intrigue gives us the opportunity to present updated and expanded versions of some of the newer systems as well as designing new tools for the GM and player alike to infuse more intrigue and skullduggery into their game. While you’ll still find plenty of combat options in Ultimate Intrigue, it will also focus on these other modes of play.

What tips do you have for GMs who have players who want to play a vigilante?

The first tip is to embrace the fun of the class. Often, vigilantes work best when they are in or around the cities and settlements that their social identities call home. But that’s not always the case.

If you’re running a series of dungeon crawls, you can expect a vigilante to stay in their “masked” guise though most of it. While this might mean that they’re missing out on half the fun of the class, it doesn’t have to. You could create challenges in the PCs’ base of operations allowing the vigilante character to shine in more social settings and use the full range of his abilities. Of course, inventive GMs will find ways to allow a vigilante character to use their social aspect even while they are in more savage environs. Vigilantes can serve as fantastic scouts. While in their social identity, they can use their social talents to infiltrate an enemy dungeon or goblin camp, maybe while posing as a wandering merchant, diplomat, or some other useful but relatively harmless agent. The vigilante’s real agenda could be to reconnoiter the enemy’s hold and sabotage any defenses before the rest of the party enters the fray. Since many vigilantes specialize in disguise, they could also serve as the method for secreting their more overt companions deep into enemy territory. All the barbarian needs to do is put on these manacles and follow the plan.

Do you see GMs creating vigilante NPCs and hiding that fact from their players?

Absolutely. Early on in the development of this class it became obvious that it was a perfect fit for inserting a hidden Moriarty-like archenemy into a campaign. Just the fact that the class is a possibility for villain creation will no doubt inject intrigue into some campaigns. Players are always wary of how GMs will use the rules to create diabolical challenges.

How can fans get the playtest document and submit their feedback?

You can give us feedback via our message boards. There is a thread for general feedback (along with some sub-threads people have already created to talk about this aspect of the class or the other), and one for actual playtest feedback. Of course, we weigh feedback from actual play higher than thoughts on the document, but both forms of feedback are valuable and appreciated.

We’re taking playtest feedback until July 20th, but you also have the opportunity to give us your final thoughts anytime until August 17th if you need a little more time.

When will the vigilante be available in its final form?

Ultimate Intrigue, including the final vigilante class, and much, much more will see release in Spring 2016.

The vigilante sounds like something unique within the roleplay spectrum.  Be sure to get the Ultimate Intrigue test while you can.