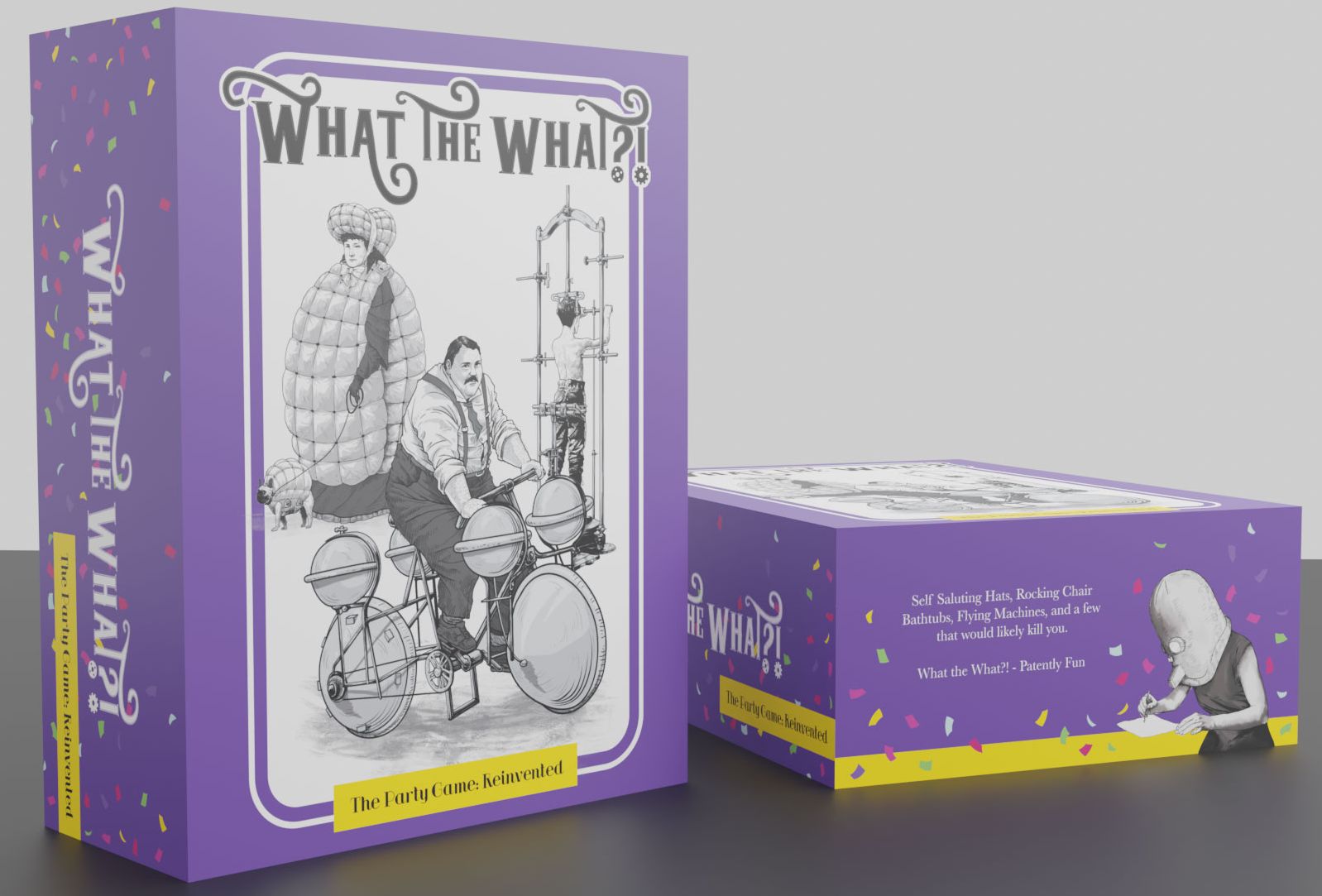 Sometimes you can see a game and you think it’s just like another game that you’ve already played. Then you get a closer look and there’s something that gives it a unique twist. That’s what happened when I saw the Kickstarter campaign for What the What?! To find out more I asked Stacy Katz, the game designer for What the What?! eight questions.

How did you get into designing games?

I’m a faux extrovert. When I go to cocktail parties, even though I’ve spent my career doing public relations and can seem at ease at large events and conferences, I am actually an introvert so making small talk is a bit painful and awkward for me. I’m left with lingering feelings – like I could have asked a more intriguing question or I wish I had remembered that joke to create a more jovial mood. This inspires me to create ways for people to connect and bond easily in a way where people are not left to their own devices to make chitchat. The idea of providing social training wheels to facilitate better conversations and create more fun — where all the work isn’t on the chemistry of the people you’re thrown together with inspires me and I’m constantly marinating on those puzzle pieces in my head.

Why the name “What the What?!”

I was cleaning out my 85-year-old father’s basement during quarantine and I kept finding all of these gadgets and objects that were just bizarre and I thought what the #$*# is this thing? When I started researching some of the objects I fell down a rabbit hole of inventions and was blown away by these inventors throughout the last 400 years of history.

The majority of the inventions have been labeled by authors or memes on the internet as “failed”, “weird”, “dumb” or ones that “didn’t change the world” – but I disagree. I am so inspired by these people who swung for the fences and came up with amazing attempts to solve the problems of their times. Of course the priority and key is that the game play of What the What?! is a TON OF FUN! Yet I would love to spark a conversation around what is considered success and failure. Today success is equated to financial success, mass product adoption, fame, and following. What I hope players takeaway is a spark of creativity, curiosity, and a seed of empowerment that every single one of us can TRY to make a difference and scan the world for solutions — especially in a time where the internet and your mobile phone bombard us with all the problems of the world, which can infect us with a feeling of powerlessness. 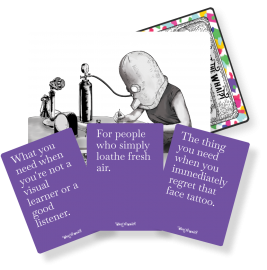 What makes “What the What?!” different from something like “But Wait There’s More…” or “Snake Oil?”

First of all, both those games are amazing! Yet if you’re not creative it can be a heavy lift. We spent hours writing and re-writing the purple Pitch Prompt cards to work seamlessly to work as a pitch on its own – or people can expand upon them. For instance, my mom is amazing at trivia games but is not so great at Snake Oil type of games where the fun comes directly out of the creativity of the players. Even a reviewer said “One of the things that really impressed me with What the What?! are the prompt cards. The way that these cards are worded makes them work seamlessly for every single invention in the deck.”

What the What?! is also unique because you are pitching ACTUAL inventions and prototypes — and you get to be amazed by the inventors from throughout history. Plus we created these gorgeous illustrations of the inventions which adds an element of fun through visual inspiration. Our goal is to create a game that adults and kids will want to play together without one age group rolling their eyes.

What years are the different inventions from roughly?

What the What?! was developed in collaboration with researchers from The Smithsonian and White House Historical Association to curate inventions from the 1500s to today. Each invention was selected to spark a WOW when the invention’s true purpose is revealed. For the history buffs and curious minds, any inventions where patents were filed include the patent number on the back of each card.

How many US Patents did you have to comb through to get the number of inventions in the game?

I think we spent months and months combing through over 1,000 patents looking for inventions that weren’t too obvious of what they did but also visually compelling enough to be included in our deck. We purposely hand picked inventions – most of which did not make it past the patent or prototype stage. I was inspired by the way these everyday people identified a problem of their time and really went for it to try to create a solution. What the What?! is about celebrating the TRY, the doing, and enjoying the journey. 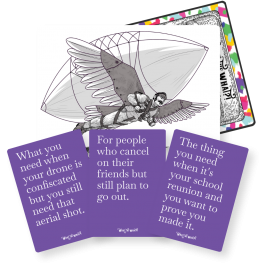 Did you use the prompt cards for people to use when they aren’t feeling creative enough?

In launching a new party game, of primary importance is that it’s a really good time. WHAT THE WHAT?! features 300 Pitch Prompt cards written in collaboration with comedians Casey Navarro and Dana Quercioli, both alumni from Chicago’s esteemed Second City Theater.

Sometimes a game like this requires people to break out of their shells. Have you found that to be less than an issue with “What the What?!”

We want the pitch prompt cards to get people started so that the pressure is off to think on your feet but honestly after all the playtesting it has been astounding to see how everyone who plays no matter their background opens up and becomes creative geniuses naturally.

You have a few extra card packs available as stretch goals. Do you think you might have enough for a full-blown expansion?

Absolutely! Having collaborated to grow my previous game, Not Parent Approved from a Kickstarter in 2015, I know what it takes to build a brand and create new content to delight the players. I came out of the gate with the What the What?! Kickstarter with a Not Safe For Work Expansion Pack. I also want to do a Women Inventors pack and many more!

Party games can be difficult to design, but it looks like this is a game everyone can get into easily. Their Kickstarter has funded completely, but it still has over a week to go. There’s plenty of interesting inventions to look at, and I can imagine each one will invoke a lot of discussion. Be sure to check it out before it’s gone.