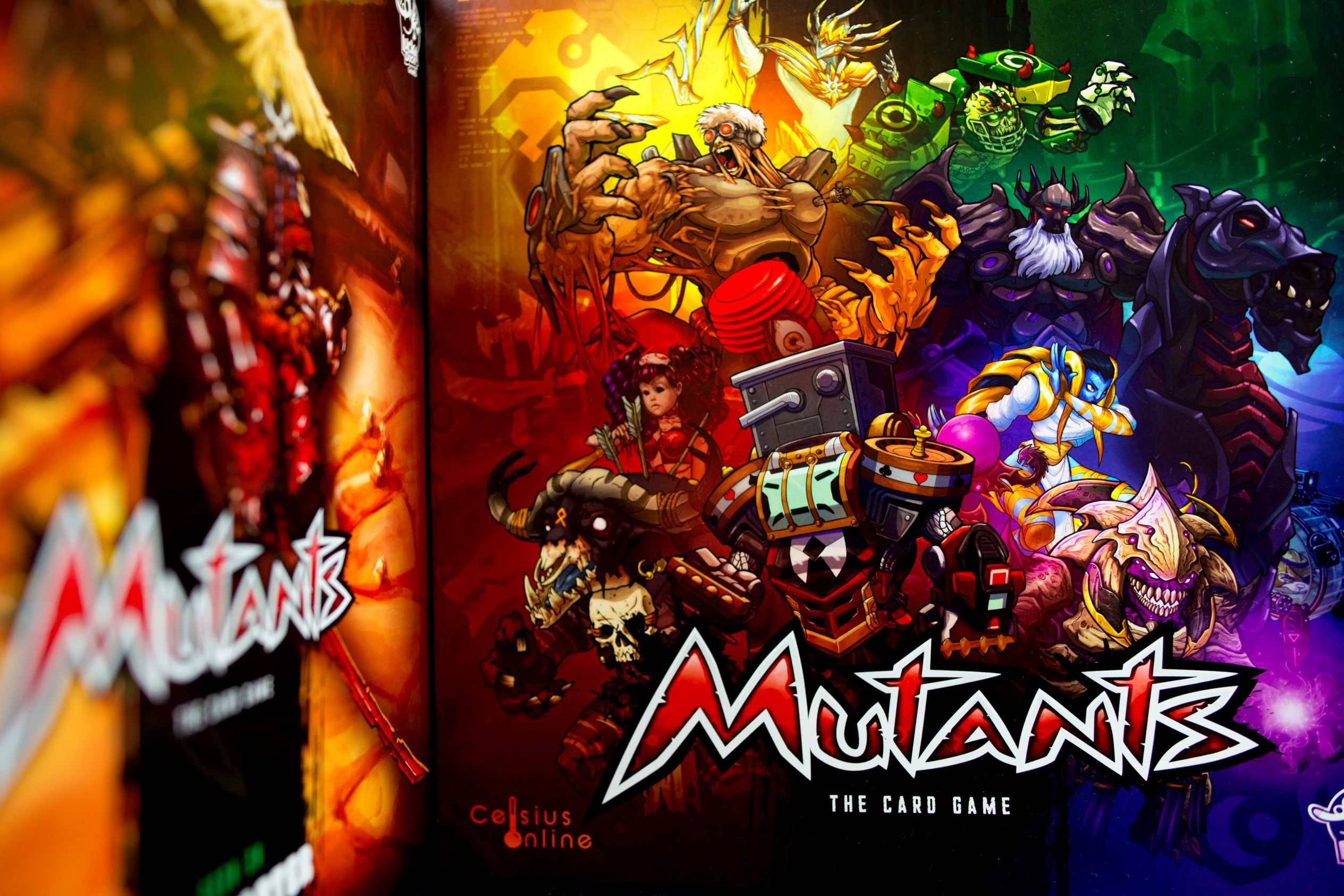 The deck-building genre was created with Dominion, and since then the number of games implementing it has exploded.  From Thunderstone and DC Deck Building Game to Trains and Clank!, there’s no sign of it slowing down.  However, finding a new twist or hook has been challenging.  Mutants is a new game currently funding on Kickstarter from designers Sen-Foong Lim and Jessey Wright that features asymetric play as its hook.  To find out more I asked them eight questions about how Mutants came to be.

Mutants looks like one of the most unique deck builders created. Did you set out to make Mutants asymmetrical, or did this come along through the design process?

Sen-Foong: It was always intended to be asymmetrical; the initial design was inspired by an asymmetrical fighting game that Jessey and I were working on. Plus, with that many cool Mutants to draw from, it’d be wasteful not to try to play with them all!

Jessey: In fact, in our first iteration we had zero symmetry! Even the starting decks were different. That didn’t last, because too much asymmetry can take away the feeling of skill and accomplishment when you win a game – and also makes it that much harder to get into – but it does show that asymmetry was a principle of the design from day zero.

Most deck builders consist of playing every card during your turn before the next player takes their turn. In Mutants each player determines which cards they use and plays them, but certain actions require more cards than others, and then the next player goes. This continues until every player has run out of cards for the round. Why use this approach?

Jessey: The main action that affects this is breeding, which uses 2 cards. Deployment and incubation each use one. We didn’t so decide to have the asymmetry in turn length so much as it evolved from the core idea of breeding two mutants for one. That said, we did spend a lot of effort thinking about the breeding system. If there’s asymmetry in decisions, we wanted to make sure that they were interesting!

Sen-Foong: We wanted to make decisions have a bit more weight to them and allow opponents to react to each other in interesting ways. By playing in an asymmetrical fashion, there are these exciting moments of tension where you have to decide how to react that aren’t the same in a deck builder where you play out the whole hand. You have some interesting pacing control as well – depending on how you decide to play and what Mutants you use, you can set yourself up to play that critical extra turn without repercussions if your opponents have no more cards in hand.

When you incubate a mutant, it goes to the top of your deck at the end of the round. Is that to prevent getting a cool mutant but not being able to use it due to the nature of the game?

Sen-Foong: The Incubator is a way that you can control the pace of the game a bit and also a way to obtain a Mutant that you might not have the exact genes to breed with. So, if I’m reading you right, yes, it’s a way to ensure that you should be able to acquire any mutant from your gene pools with just the basic Mutants – it’ll just take a little longer to get into play as it spends the round warming up in the Incubator!

Each card has a special ability when out into play and when being discarded. How did you figure out this mechanic?

Sen-Foong: That was the hook we cribbed from the other game we were making. When Lucky Duck approached us to pitch for this license and we saw the Mutant: Genetic Gladiators app, we noticed that there were 3 Mutants per team, which fit perfectly with the 3 equipment slots our original game had for each fighter. Figuring out how the various deploy and leave powers interacted with each other was simple in theory and a lot of development in reality!

Jessey: The real challenge, if I’m being honest, was finding mechanical fits for the six genes that worked well within the dual-effect card system that we were developing. I couldn’t even say where the original inspiration for this mechanic came from because, as Sen noted, it was taken from another game idea we’d been working on for a couple years because we saw an immediate fit with Mutants!

Where did the concept of the Power Track come from?

Sen-Foong: We wanted to bring the idea of arena combat without having to simulate the entire app. We wanted to avoid tracking of hit points on individual Mutants at all costs. Fiddly bits like that are anathema to our design ethos! The Power Track is a “king of the hill” mechanic where you’re trying to stay at the top and stay out of the danger zone. We really wanted to ensure that the game didn’t dwell on the inevitable – if someone was crushing their opponent, we a) wanted to reward that and b) wanted the new round to start with players being on relatively even footing. There’s no need to continue kicking someone when their down! Just award the victor so extra points to incentivize going hard in the arena vs. freezing and start the next round fresh!

How difficult was it to balance all the cards in the gene pool?

Sen-Foong: It took a lot of effort from our amazing development team under the guidance of Filip Miłuński. He would give us feedback and we would iterate. His teams would test the new cards and the cycle would continue until we all felt good about the card balance.

Jessey: There’s a number of dimensions we balance as well. Not only do the cards need to be on balance with one another in terms of their effect, but we have the freeze value to consider and to ensure that their effects match with the theme of their genes. A Saber Necro mutant that cycles cards and gains mutants would break the themes. This has made balance a big challenge, but one that Filip and his team has made as seamless as it can be!

Sen-Foong: Good question! There’s even MORE cards coming out with the expansion material including a whole replacement set of basic Mutants, so I hope SOMEONE constructs some more gene pools for people to play with!

Jessey: The preconstructed gene pools are meant for learning the game, and so we have no plans to prepare pre-constructed decks for the expansions. The way we hope people will play – especially with the expansions – is draft and constructed. I, for one, am very excited to see the cool gene pools fans come up with using the constructed rules.

Are either one of you fans of solo play that you wanted to include this in the game?

Jessey: I’m a fan of solo play, but it was a later addition to the design. Vince asked if we could do it, I said we’d give it a try, and then magic happened. As a solo gamer, I’m really happy with what we achieved. It’s a simple to execute, but challenge to beat, solo game system.

Sen-Foong: I see the value in solo play and I solo playtest a lot of games, however, I’m more of a social gamer so I like live opponents. Even on app based games, I like knowing that I’m playing against an actual human being on the other side of the screen!

I haven’t played Mutants, but I do think that the mechanics of the game are definitely worth checking out.  It truly looks like a unique experience.  Be sure to look at the Kickstarter campaign to find out more.  They have blown past their goal and have plenty of levels for purchasing the game.