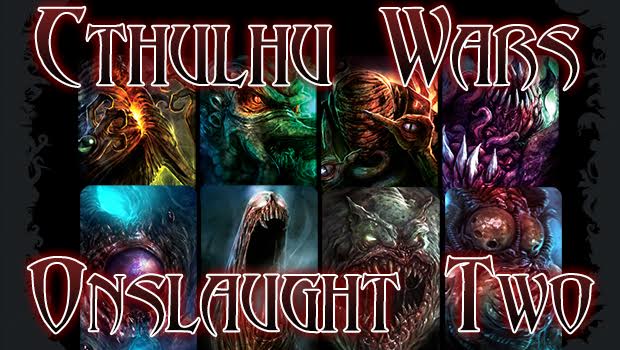 When Cthulhu Wars came to Kickstarter, it was as if the Ancient Ones opened a portal and clashed at once, with the campaign raising $1.4 million.  If you have seen the box and the figures, the game itself is just as epic.  Now Petersen Games has put Onslaught Two on Kickstarter to expand Cthulhu Wars.  I interviewed Sandy Petersen and asked him eight questions on his success and the current campaign.

Were you surprised at the success of Cthulhu Wars?

Yes. I thought it would be two or three hundred grand. I was really excited by the results.

We’ve seen Kickstarter campaigns reach $150 or more for the game with additional stretch goals, but not that much for the base game. Were you worried pricing Cthulhu Wars that high?

Well Kingdom Death Monster was similar. In effect, this level of cost invented a new type of game – the “premium board game”, in which the game’s components & gameplay are both first-class. Naturally there has been push-back – people saying things like “I could buy 5 other games for the cost of Cthulhu Wars”. Which is perfectly true, but none of those games would be Cthulhu Wars. Look at it this way – no one whines when they buy a Beemer that they could have bought three other, crappier, cars for the same cost. No one goes out to eat at a nice restaurant and then complains that it cost more than Wendy’s. Why can’t games have the same “higher level” of quality? It seems to me that in amongst the other games on a collector’s shelves, there could be room for an occasional stand-out gem.

Can you tell us a little bit about the process for creating those great minis?

First I create a description and collect reference art for the concept artist. He creates the concept art which I then approve – sometimes it takes a few back-and-forths before I am happy with it. We then send the concepts to our sculptors (currently Fenris Games in England). They create the actual sculpt, showing us works in progress so we can critique it before they finish. When they are done to our satisfaction, we send a copy to China and it is used to create a steel injection mold. The figures are pumped out of the molds, and Chinese workers glue them together (most of our figures are multi-piece) and put them in the boxes for shipment.

How do you balance an asymmetrical game like Cthulhu Wars?

One of my main jobs at Ensemble Studios was to balance all of the various Age of Empires factions. I spent a decade doing this, and I applied this knowledge directly to Cthulhu Wars. Testing, retesting, making quick changes on the fly, then testing again. It’s all based on actual viewed plays and my responses to them. It is obviously, not trivial. It helps that I am really familiar with the Cthulhu Mythos so I can adjust all the changes to make them fit within the theme.

Do you feel that you previous experience in developing PC games has helped with developing board games?

Yes, as stated in the previous answer. As another example, the way spellbooks are earned in Cthulhu Wars was directly stolen from the concept of video game Achievements.

What does the Onslaught Two Kickstarter bring to the table?

A new chance to get all the expansions & the game at a discount, plus 7 new expansions, never seen before. Plus some cool stretch goals.

With the expansion, Cthulhu Wars can play up to eight players. How do you keep all players involved during the turns without too much downtime?

Well I have to admit that the 8 player game is not my favorite – I prefer 4-5. The game is really fast-moving, which helps, but there is still a little too much delay for me with more than 5. The 6-8 player map was created in direct response to the fan base, who demanded it. I have no problem with providing it – everyone is different, and no doubt some people are happier waiting for their turn than I am.

Do you have any other projects you’d like to let us know about, either currently available or ones to look for in the future?

Sure! Our next big kickstarter upcoming early in 2016 is Gods War.