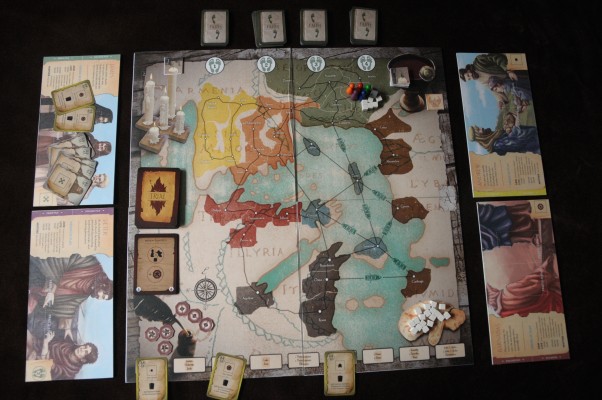 These days it’s easy for a game to have a zombie, sci-fi, or fantasy theme.  While there is a bigger mix of of themes in the board game community, sometimes you are surprised by a game’s theme that you want to find out more about it.  That’s what happened when I found out about Commissioned from Chara Games, so I asked Patrick Lysaght eight questions to find out more.

My name is Patrick Lysaght. I am a Christian, husband, father, active-duty military officer and game designer. I am also the president of Chara Games. We are currently running a Kickstarter for our first game, Commissioned.

Did you ever think that you would become a game designer?

I grew up playing games, but never considered designing games. All that changed when I needed a game that could interest the different playing styles of my extended family. That was in 2012, and I have been designing ever since.

How did you come up with the idea of Commissioned?

My wife and I are Christians, and we wanted to do a game that merged our passions for board gaming with our faith. I had recently finished a course in church history, and wanted a fun way to share the tremendously important story of the early church that avoided the mind-numbingly boring church history lecture. Additionally, we had been exploring cooperative games like Pandemic and Robinson Crusoe. We realized that the cooperative game would be an excellent genre to tell the story we wanted to tell.

Was it always your intent to have a game with this type of setting?

Yes. We started off designing Commissioned around the idea of recreating the faith, fear, and wonder experienced by the early church. Also, we specifically wanted to make the game educational for Christians, challenging enough for non-Christians, and fun for everyone. This is why the game takes a predominantly historical viewpoint on the early church.

How do you keep the theme accurate without sacrificing gameplay?

We decided to recreate the player experience using historical events, but to allow those events to occur in ahistorical order. This allows the players to face historical problems without being held to a specific sequence. Ultimately, this makes player choice more meaningful. The early decisions players make shape the course of the game in a new and different way each time.

Do you find gamers more skeptical of Commissioned because of its theme?

Yes. Christian gamers are very skeptical due to the poor gameplay they have experienced in previous attempts at religious games. Non-Christian gamers are concerned about being judged by the game or the other players. We have worked very hard to use the theme as a strategic setting. The game lets the players explore the church’s challenge without dictating a specific worldview. Commissioned has been play-tested, and enjoyed, by gamers of all different faith backgrounds. We are very proud of how the gameplay stands up for itself!

Do you feel that cooperative games work better for this kind of setting, or do you think we might see competitive games set during this time?

I think there is definitely a space for competitive games in this era. The challenge will lie in executing each individual side from its own historical viewpoint. How did that side view itself? Can you communicate it during the gameplay?

Do you have some other game ideas that you’d like to work on after Commissioned is published?

We are working on a prototype social deduction game about life in the underground church. Initial playtests have been promising, but right now our focus is on Kickstarting, printing, and fulfilling Commissioned.

You still have about ten days to check out their Kickstarter.  It is fully funded and has gotten some great reviews.  If you want something different from the typical themes, I encourage you to check it out.