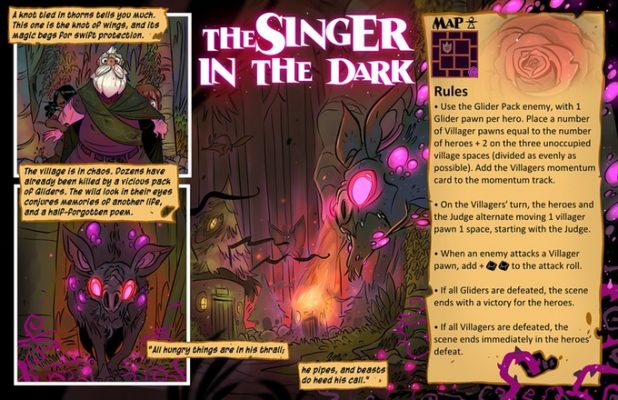 Thornwatch is an amalgamation of two huge forces in the gaming arena.  While the Penny Arcade guys might be more well known for their comics and love of video games, they definitely know their board games and RPGs.  They’ve teamed up with Lone Shark Games to create the game Thornwatch, currently on Kickstarter.  Mike Selinker is no stranger to asking questions for us, and he graciously accepted the invitation to answer eight questions on this collaboration.

How did you get involved with the guys at Penny Arcade?

I’ve known them since they started their first PAX in 2004. Both our Seattle-based companies started out small right around the same time, and took off from there in tandem. We’ve done dozens of events at PAX, and a few years ago, we moved into their building. They hover above us like gods.

You describe Thornwatch as “a graphic novel adventure that bridges the gap between RPGs and board games.” How does it bridge the gap?

We’ve been working in the space between RPGs and board games for a while, with Betrayal at House on the Hill, the Pathfinder Adventure Card Game, The Ninth World, and Apocrypha. Thornwatch is the one that looks the most like an RPG, with its Judge running the modular scenarios, but it has very real goals on both sides. You play a card game on a miniatures-style board with RPG-like characters. Yeah, it’s pretty unique.

So what makes Thornwatch different from a dungeon crawler?

I presume you mean like Descent, a game I did a quest for a long time back. It’s pretty different. The players have rich characters that they can make their own through narrating their actions for advantage based on their traits, for example. The game feels much like a campaign, without any of the bookkeeping or rules-fudging that RPGs seem to require.

In the game you have a Judge. Would this be similar to the DM?

Ish. The Judge is an active player, not just a facilitator. They have things to do and resources to manipulate. They set out the options of the story, but even they can’t control everything about what happens. It’s a fun role to play.

Does the game play in a campaign style, or will they be individual missions?

You can play a long series of adventure storyboards or just a one-shot. In our game, the player—not the character—advances. Completing an adventure gets you knots that you can tie on your person to gain advantages in later play.

How do you get board gamers to embrace the roleplaying aspect, as it can be difficult for gamers who haven’t roleplayed before to break out of their shell?

By bribing them. A Thornwatch member’s traits are prompts to basic roleplaying, and when you do the things your traits suggest in a style that those traits suggest, you get bonus hero dice you can use. When you display your knots, you get advantages. When you describe your card effects by answering the questions on the cards like “What does it look like when the land thirsts for the blood of the living?”—well, that’s just really badass, isn’t it?

You said that this will be the first of three interlocking games in the Eyrewood Adventures line. Will the next two be similar games, or will they be completely different genres?

They will have a common core, using similar basics like the momentum track to resolve initiative and damage. But you’ll do different things. In Lookouts, you’ll try to morph your decks and grow your array of monster-hunting badges. In Daughters, you’ll build your glade in the forest. There will be lots of differences between the games, yet all the characters will be usable in all the games.

It seems you like to integrate cards heavily into your games. Do you have a preference for playing card games yourself?

I do play a lot of them. Even when I go to Vegas for vacation, I still end up in a room playing card games. OK, really different kinds of cards games, but still.

Thornwatch sounds like a completely unique experience.  I’m curious if it will meld the two genres together successfully or not satisfy gamers who prefer just board games or RPGs.  They have great designers behind the system, so any misgivings I have are minor.  Be sure to check out the Kickstarter for more details and the print and play files.