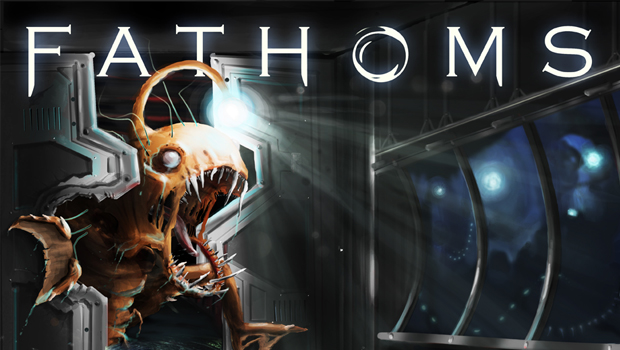 It seems that miniatures games have taken off since the advent of Kickstarter.  While a number of games with highly detailed miniatures came out before that, since the the theme and gameplay have changed drastically.  When I heard about Fathoms, my first response was to ask what was different about the game.  After I found out I wanted to hear more, so I asked Michael Robins eight questions about Fathoms and the Kickstarter for it.

Tell us a little bit about yourself?

My name is Michael Robins and I’m an artist and avid gamer. I’ve been drawing and playing games all my life, but it it really started with “choose your own adventure” books, traditional board games and CRPGs. Over time that evolved into pen and paper role playing and eventually to me being the game master for those games. I spent years crafting worlds and adventures for my friends and everything about this game grew from that. I tend to think of myself as very creative and I love to express that in any way I can. Creating fun experiences for other people is one of my favorite ways to express my creativity. Professionally I’m a 3d artist, and I really enjoy shaping my vision into something tangible for others to experience.

What are some of your gaming influences?

My influences come primarily from board/tabletop and PC. I’ve played just about every genre out there, but I especially love RPGs and Adventure Games. Classics like the King’s Quest series and old CRPGs like Buck Rogers were especially influential. When it comes to pen and paper though, Dungeons & Dragons really gave me the opportunity to explore and create in a way that other games had previously not allowed. Games that specifically influenced me to make a game like Fathoms are “Hero Quest” and “Mutant Chronicles: Siege of the Citadel.” Before then, my experience with board games was Monopoly and Sorry. When I saw how RPG elements could be used in a board game it really fulfilled my desires for something more concrete than pen and paper but still kept some of the traditional pen and paper experience. I couldn’t get enough of them.

What made you decide to design a board game?

Everyone has heard the line, “Wouldn’t it be cool if . . .” But let’s be honest; most of the time we allow ourselves to become distracted. Well, one day I was sitting around and had some ideas pop into my head and I said that line. It just hit me with an extreme amount of motivation that I was going to stop wishing something would happen and actually work to make it a reality. I immediately grabbed pencil and paper and jotted down the ideas. I added a little each day, week, or month over the course of years until I finally had a finished game. My artist background definitely helped, as I had to create miniatures and tons of other artwork.

How does Fathoms differ from other miniatures games?

Dynamic water mechanics is what sets Fathoms apart from other miniatures games. The idea of using water as an element of change was the very first idea that popped into my head and eventually drove me to make this game. It’s not just marked areas of water on the game board, but dynamic moving water. Fathoms is a game where at any moment you can be overtaken by the deep. During missions hull breaches can open, spilling water onto the game board. One simple rule guides the flow of water from room to room, lets it build up when a door is shut, and flow out when that door opens. The aquatic nature of your foes grants them increased strength and ferocity the deeper the water gets, and some of your weapons grow weaker or stop working underwater, while others become even more powerful.

The board also contains elevated terrain, which allows you to retreat from the rising floods and provides an area of tactical advantage. Gain a combat bonus as you snipe enemies from the high ground, or hold them off at a staircase while your allies rain death from above. If they slip by, kick, throw or blast them over the edge.

It’s these two elements of water and elevation working together that force you to change the way you think about and interact with your environment. The skills and weapons you choose, the formation you hold and the unpredictable dynamic added by hull breaches creates a game where your strategy must evolve to cope with the horrors that await you.

What changes do you have to make since Fathoms is set underwater?

I really had to consider how a player’s actions would be affected by water. Everything from unit movement to attacks has to be altered when in an underwater environment. There are items and skills that can help mitigate those changes, but no player is fully protected from the effects. One of my favorite elements in Fathoms is how weapon function changes when underwater. The flamethrower will cease to work entirely, while the sonic rifle becomes even more powerful. Your weapons load-out can be a big risk, because you never know how your environment might change; or maybe you are counting on it.

Additionally, your enemies are aquatic in nature and this gives them a huge advantage when a room starts to flood. The deeper the water gets, the more powerful they become. If you can’t seal a breach and a room is filling up you can always open the door to let the water out, but what will you be letting in?

This sounds a bit like X-COM: Terror from the Deep. Are there some similarities there?

I love X-COM and there are definitely some similarities, but they were by no means intentional. The presence of water, menacing creatures and futuristic combat all bear similarity, but in X-COM, the physics of the battle don’t change when underwater, but in Fathoms, the presence of water changes everything. Fathoms is also very focused on what is going on inside the research station and doesn’t have anything like the base building you’ll find in X-COM. The gameplay is turn based though, and the futuristic battles play out a lot like they do in classic CRPGs like X-COM. Now, I’m not saying it’s aliens but… ok, it’s definitely not aliens. The story that unfolds in some of the missions does reveal the nature of the creatures, but I’ll let you find that out for yourself.

It wasn’t really until late in development that I realized I was likely drawing subconsciously from many influential sources from my past. I think that is unavoidable, perhaps even desirable. We always build from what we know and look for ways to improve or distinguish ourselves from it. Interestingly, I tried to make many of my game rules unique, but over play-testing they actually evolved to be very similar to the kinds of rules you see commonly in the genre. It just goes to show that those games are the way they are for good reason and have likely been refined quite well.

How do you differentiate terrain, such as high ground, low ground, water-filled areas, and dry land?

Differentiation of land types is done in three ways. The first is by having staircases that lead to every area that is considered high ground. The second is color. Areas of high ground are colored with a green hue. Extra low areas ground are pools of water that are blue and slightly distorted. The third is water tokens. Various events can add water tokens to a room. Those tokens determine if the water is at your knees, waist, neck or above the head. High ground gives a bonus to height, and pools of water deduct from it. Each of those stages has an effect on your movement, armor rating and weapon status, but more importantly on the strength of your opponents.

Should your Kickstarter be successful, do you have future plans for Fathoms or do you plan on working on something else?

I am working on something else actually, but I also have future plans for Fathoms. Fathoms is set in an interesting world that I would like to explore further. At the end of the game something is introduced that will really make further exploration of the Fathoms concept interesting, and the events that take place in Fathoms will further alter that world. I would love to make both an expansion that follows the current story as well as a setting a few hundred years in the future.

I like that it is different from other dungeon crawlers, but I hope that it isn’t too complicated that it gets bogged down.  I definitely think it’s worth your time to take a look at projects that aren’t the norm, and Fathoms definitely fits that category.