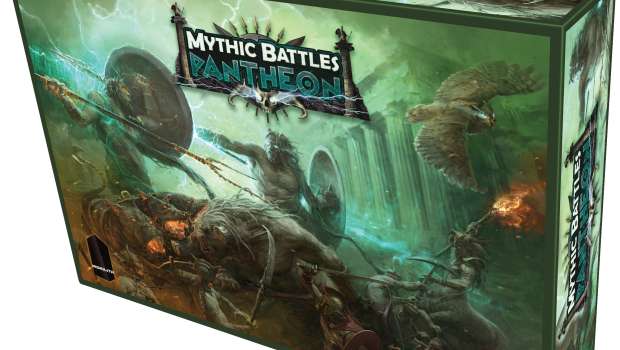 A few years ago Mythic Battles was released.  While it looked like a typical skirmish game, it had several interesting concepts, like several cards that represented the characters’ statistics.  As the character took damage, the current stat card would be replaced by one with lower stats.  However, it was difficult to get into the game since the pieces were represented by simple tokens.  Now the designer is bringing back the system with miniatures in the game Mythic Battles: Pantheon, now on Kickstarter.  I got to ask the creative director and lead designer eight questions for this game.

Léonidas Vesperini (creative director): When the original Mythic Battles was released in 2012 I reviewed it in my magazine Ravage. I loved the game mechanics and the feel of the game, but there were a few ergonomic problems. Also, it was a miniature-based board game without miniatures!

Benoit Vogt (lead designer): The set-up was taking a long time due to the high number of cards to be sorted and the immersion into the game was not optimal due to the tokens that represented the troops. Identifying and fixing these issues with a reboot of the game was the best way we found to make a good game great. After the phenomenal success of the Conan Board Game, I approached Leo about working with me to publish Mythic Battles the way should’ve been from the beginning.

Leo: Expanding on the original game would not allow us to do what we really wanted, so we kept most of the game mechanics and enhanced the game on every possible level. In our eyes, after playing the two games intensively, we sincerely think Mythic Battles: Pantheon is much superior to the original.

What differentiates Mythic Battles: Pantheon from the original game?

Leo: We have streamlined the rules, simplifying everything that could be simplified. For instance, Art of War cards are used to fuel your power and additional currency isn’t necessary. Instead of a deck of cards for each unit, we have created an innovative character Dashboard card with a sliding ruler to keep track of stats. The game is ready to play without assemblage. We’ve also changed the scale with human, god and titan-sized miniatures and have introduced gods to the gameplay. In the original game you had to build your army using only troops from your side. In the new game, players can recruit anyone, any hero or any monster in a draft phase similar to Magic: The Gathering. Instead of a square grid, we now have zones that are all different in size and shape. In each zone players can have many units, while in the original only one unit per square was allowed. And of course the most obvious difference is that we now have beautiful figures!

Benoit: The first game was about mass battles. With Mythic Battles: Pantheon we’ve introduced new game modes – skirmish and story. This allows us to take advantage of the wealth of Greek mythology, which is full of very charismatic and well-known character, each with unique playability tied to its mythology. In the story mode, players play a scenario, or a series of linked scenarios with victory conditions very different from the skirmish mode. Mythic Battles: Pantheon is a much more narrative and immersive experience – it’s a huge difference when you play.

Why use Greek mythology as the setting?

Benoit: Greek mythology is extremely rich and well known and has been a great source of inspiration with movies and video games such as 300 and God of War. Everybody knows about Zeus, Athena, Heracles and Achilles and in Mythic Battles: Pantheon players get to be a god on the battlefield.

Leo: … Troy, Clash of the Titans, Wrath of the Titans, Hercules, books, comics, …Greek mythology is one of the most famous settings you can think of! Who doesn’t know about Greek mythology? It speaks to every one of us. We have developed a deep background for Mythic Battles: Pantheon where everything is explained and everything has a reason. Players will discover more during the Kickstarter and also with the roleplaying game being published by Black Book Edition in 2017.

How will players be able to determine height advantage on the board?

Where’d you come up with the battle system for Pantheon?

Benoit: I wanted a game that would be a mix of my favorite mechanic, a card game with a skirmish game that allowed players to mitigate randomness and manage resources. I introduced a kind of resource into Pantheon with the Art of War cards. These cards allow players to take the best of their warriors and have better control over the drawing of cards. Using the Art of War cards wisely will be a key for victory in many games as they are a limited resource. The dice mechanic also limits luck impact as players may sacrifice the result of one die to improve the result of another die.

Leo: You could say that Mythic Battles: Pantheon is at once a card game, as it uses cards and like in Magic: The Gathering players manage their decks and create combos, a board game, played on a board with zone-specific rules and an army-building miniatures game, where the figures all have statistics that evolve as they are wounded.

It looks like the dials are used to replace the character decks used in the original. Why did you make this change?

Benoit: We decided to replace the character deck as it was time consuming and we wanted something easy to pick up and set up. New Dashboards have replaced the deck and the dials, putting all of the unit’s information on the tabletop in an easy to use manager with a slide ruler – the description of their power, their talents and all of their stats.

Do you have plans for expansion if the Kickstarter is successful?

Leo: Yes, we have many things in store! Actually, all of the expansions are ready. We will show them during the Kickstarter if it’s as successful as we hope it will be. One of these expansions is Poseidon! With Poseidon we introduce the water element, sea creatures, ships, naval battles and we have a campaign of several scenarios. There will be very impressive miniatures in this box, and a complete new way of playing the game.

Aside from Mythic Battles: Pantheon, what other projects have you worked on?

Benoit: I was the lead designer of the original Mythic Battles board game.

Leo: I was a game reviewer and magazine publisher (Ravage, Lotus Noir) for decades. Last year I was part of the team for the massive Conan Board Game, which prepared us with invaluable insight for delivering a hugely successful game to market. We learned a lot from Conan and have put that experience towards Mythic Battles: Pantheon.

If you like Greek mythology and miniatures battles, be sure to check out the Kickstarter for Mythic Battles: Pantheon.