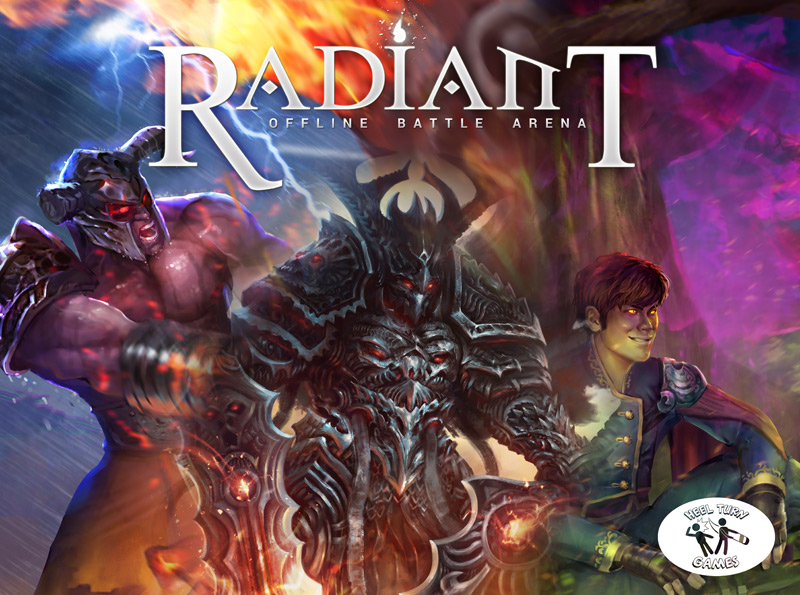 It’s not unheard of for video games to mimic board games and for board games to mimic video games. The MOBA (multiplayer online battle arena) is one of the newest genres created.  Since they have gained popularity, it’s not surprising that we are finding a couple of board games that are trying to bring the MOBA experience to the tabletop.  Heel Turn Games is trying to do this with Radiant: Offline Battle Area, currently funding on Kickstarter.  To find out how the game played, I asked Lead Designer Jack Murray eight questions.

Where did the idea for ROBA come from?

I started working on ROBA in August of 2014 – this would have been just after The International (the DOTA world championship) that year. At the time I’d been playing a lot of MOBA games, including DOTA and what was then the closed beta for Blizzard’s Heroes of the Storm. The idea that MOBAs were already like CCGs was one that had been in my head for a few years already at that point. The focus on metagame elements such as team composition, counterpicking and character builds especially is something that will feel very familiar to any CCG player.

I was working on several spec projects of the time of which ROBA was just one, though as I began to get into the development a bit it quickly took over all my design time. There was just something about it that was more fun than my other projects, even at that early stage.

Why did you make it a card game instead of something with miniatures and a map?

The boring answer to this is because card games are what I know. I’ve been a competitive CCG player for over fifteen years so it’s a design space that feels natural and familiar to me.

When I initially conceived ROBA, I was already working on a different game that was more in that map-and-miniatures style (one that had nothing to do with MOBAs). Part of the reason I like working on more than one kind of project at a time is that stepping away from one project and working on something totally different can help you get a new perspective on design problems that are challenging you, so I wanted to do something different.

Then there’s the fact that doing a map-and-miniatures style game would mean making a very, very direct adaptation. The reason you’d make the game that way is that you want to capture the details of MOBA gameplay very accurately – but this isn’t a computer game, it’s tabletop. The kind of insane level of detail that the mechanics of DOTA or League of Legends possess are profoundly unsuited to a board-game context. I wasn’t interested in doing a point-for-point adaptation. That’s not an interesting design challenge. I wanted to take the things that I enjoyed about MOBAs – the essence – and use that inspiration to create something new: a tabletop game that used the strengths of that form in a way that video games couldn’t.

Finally, I wanted to make a game that played relatively quickly. You can play a game of ROBA about 30 minutes once you know the rules and have a strategy, and that’s just not something that would be possible with a more detailed adaptation.

MOBAs are known for having a wide variety of characters. How many will ROBA have?

The ROBA core set will launch with 9 Heroes. Our first expansion, which we hope to fund through the kickstarter as one of our stretch goals, will contain an additional three.

I’d love to expand the hero pool to match something like DOTA or league, although that’s obviously a very long-term ambition. I have principal design completed on enough Heroes to fill the first season of releases, plus a few extras, though many of these require extensive polish and playtesting before they will be fit to see the light of day.

Planning the expansion of ROBA’s roster of heroes is one of the things I’m most looking forward to once the Kickstarter has concluded and we know where the game stands.

How different will each character play?

A lot of work has gone into making each character feel distinct. It’s one of the most important facets of our Hero design.

Our design process for creating new Heroes is (generally – though not absolutely always) a top-down process. I start by determining the theme of a new hero, usually by taking a well-known archetype from Fantasy fiction or other sources that inspire me. Then, before I worry about balance or even show the Hero to anyone else, I will create a bunch of possible skill cards and abilities, typically more than I can use for that hero. Then it’s just a question of putting the pieces together in a manner that fits the theme. Creating a strong sense of mechanical identity for each hero is really important and is also one of the things I enjoy most about creating cards for this game. It’s a very fun challenge.

I would say that no two of our heroes – even within the same class – play exactly alike. They all bring something unique to the table, both in terms of their strengths and of their weaknesses.

Do you play as a single character of a team?

You control a team of three heroes in ROBA.

We experimented with a multiplayer version of the game where each player controlled a single hero but there were lots of problems with it. Card effects had to be extremely watered down in terms of complexity to keep the game flowing smoothly. I decided fairly early on to keep the game’s focus on providing a tight and polished two-player experience, rather than compromising that for the sake of a multiplayer version that would have felt bolted on anyway.

What kind of statistics are players keeping track of?

There are four stats in the game – Attack, Armor, Health and Exp Cost. These are static and don’t change. In addition, there are two elements of the game state that we keep track of with tokens. These are damage and power. Damage is a measure of how much damage your heroes have taken and how close they are to being knocked-out. Power is a resource that players can use to level up their heroes or purchase items such as magic swords and armour.

All-in-all, and this is by design, the game state in ROBA is very easy to keep track of.

MOBAs are notorious for their high learning curve. How are you going to make ROBA easily accessible?

This was one of the things I was most passionate about during the design process. The game had to be kept simple and accessible. It was one of the core dictates of my design philosophy for the game, going all the way back to 2014.

Great effort has been made to keep card text simple and intuitive. We follow a very strict character limit when designing card text that helps keep me on the straight and narrow. A lot of the most exciting ideas to a game designer can be very difficult to implement in a manner that is easily understandable to the world outside my own head. The character limit serves as an excellent indicator as to whether or not a concept is too complex. If it can’t be made to fit in the text box without reducing the font size, we cut the idea and try something else.

Are you hoping to introduce video gamers to board and card games with ROBA?

I think there’s already a lot of crossover between these communities. I don’t really see videogamers and tabletop gamers as being separate. We’re all gamers.

It’s certainly my hope that players from both communities will enjoy ROBA.

If you are interested in trying out new strategies with multiple characters that you play at the same time, then the shufflebuilding of ROBA should make a fun game with something unique each playthrough.  Be sure to check out the Kickstarter campaign which is almost half funded after one day on Kickstarter.