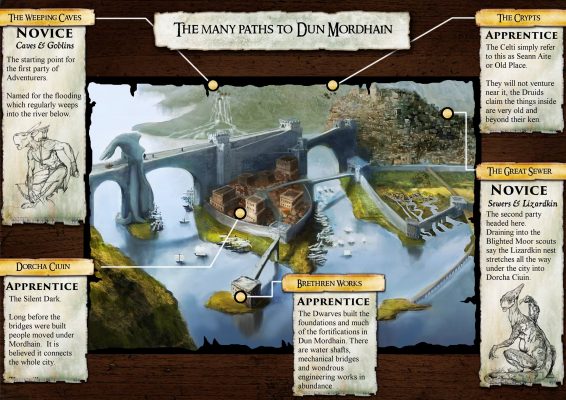 When you think of RPGs, you probably think of stacks of books, paper and pencils, and multiple odd shaped dice.  That changed a bit with the creation of the Pathfinder Adventure Card Game.  While it was innovative, it seemed to focus mainly on combat.  However, it doesn’t do much as far as exploration and world building goes.  Kevin Young of Inspiring Games will have a Kickstarter for Legends Untold that he believes solves this issue.  I asked him eight questions to find out more.

How did you get first involved with board games?

I think I was 8 or 9 and went to a friends house. He had bought this red box with weird shaped dice and it had something called a Carrion Crawler and an enchanted bed in it. I had just played Red Box D&D and I loved it! I then played lots of RPGs for about 4 years and then somebody introduced me to this game called Spacehulk and I became an oldschool GW fan. I finally moved onto board games after that when we went to a convention and played Diplomacy and Empires in Arms.

I’m a returner and took a break in Muggle world for about a decade. When I came back I was on a Stag do (OK a Gamer’s stag do) and somebody brought out this game called BANG! Then Ticket to Ride then Arkham Horror and so I went down the rabbit hole…

Why create an adventure game using cards instead of miniatures and map pieces?

Legends is our debut game and we want to get it funded and delivered, to help establish a brand that we will be there for the gamer. It’s too high risk on our part top do that with miniatures both financially and in terms of reputation for failure to deliver so we want to keep it simple. Map tiles were an option but I really wanted to make the game both portable and large in scale. Imagine a poker card being a large cave or sewer or crypt or whatever. Now imagine the nib of a ballpoint pen being the size of your Hero. Now add lots of all those cards together to form a map. You have just made a truly enormous map for yourself to explore that you can fit into your bag pocket no problem.

Is the game scenario based, or are they random depending on how cards come up?

Each Environment (Caves, Sewers, Crypts etc) comes with a set of Scenarios. You can play these in isolation or as part of a linked Campaign.

You can also design your own Scenarios as home Brews.

Finally you can play the game in sandpit mode where you go on a delve in the Environment but have no specific scenario in mind. You just fancy an adventure.

How do you represent your characters and their inventory?

Each Hero begins with a an Occupation (Forgehand, Farmhand, Evicted Noble and Student in the Caves set). These all have a set of attributes, a knife stat block (your last resort weapon) and a Mastery pennant on them (Masteries help power Talents and give you advantages in the Adventure. To the left of the Occupation card you place any outfit (clothes, armour etc) and then any kit which is in your backpack (rope, almanacs, pickaxe etc).

To the right of your occupation you place any weapons you have and then beneath these any Weapon Talents.

All weapons are based on historic technology from the dark ages (in the starter set) and so you have a choice of the most common weapons available to the Saxon peoples (bow, axe, spear, staff and seax (long knife)).

Each of these weapons has a number of weapon talents specific to it which (where possible) we researched historic documents to create realistic and actual moves.

Finally below the Occupation card you will place any Skill Talents, these could be anything from Caving to Arcane Theory to Fey Heritage etc.

There are 15 Weapon talents (3 per weapon) and 16 skill Talents in the base starter deck. You can use these in any combination to create the Hero you wish. Thousands of combinations are available.

Will the characters level up and gain abilities playing through multiple adventures?

You start with an Occupation Card, a Weapon and three Talent slots. We recommend one Weapon Talent and two Skill Talents but it is up to the player. Taking all Weapon Talents is not recommended as the game is not hack n’ slash, it is about 30% combat and therefore you need Skill Talents to survive.

When you successfully complete a Scenario you level up. When you Level up you will either be given a New Talent slot or an upgrade. As you continue to level up Talent slots will become less frequent.

A Talent slot can be used for whatever you wish, Weapon or Skill, to plug a perceived gap or strengthen an area of expertise.

Each Skill Talent has three abilities on it, so you will be making your Hero materially more fun every time you add a talent slot.

Upgrades entitle you to either add a new Outfit, Kit or Weapon. Or you can use your upgrade to improve an existing item. All Outfits, Kits and Weapons are rotatable so that you can get the improved version of what you had before. So the Rope becomes the Climbing Kit, the Decent Clothes become good clothes and the Rough Staff becomes the Staff etc.

How is combat resolved?

Legends Untild uses a threshold system to ensure depth of resolution with minimal dice rolling. In melee you roll 3d6, take a modifier from the Foe card and apply the result for both you and the Foe simultaneously. This could be either side being hit, both sides being hit, or an advantage or disadvantage being passed on to the next combatant.  All attacks can use the base weapon of a related weapon talent and require an appropriate level of alertness to use depending on the move being attempted. So combat is deep, deadly and quick. And beware that guy in the group who takes the bow as Legends Untold uses friendly fire rules.

Some cards look like they have multiple uses. How do you determine which item you equip?

Please see above. When you level up and get an upgrade you rotate the card to the improved version. We are very conscious with our debut game we need to give the gamer the very best product we can, this is our way of giving two cards for the price of one.

Do you have expansions in mind if the campaign is successful, or do you have some other project you have in mind?

The game has an optional campaign attached which is epic in nature (over 100 Scenarios) following the path of our reluctant heroes. I should qualify that statement by saying the theme is grim and gritty dark ages low fantasy, our heroes come from the Sax people who were recently conquered by the Newcomers. The Sax people send off 8 reluctant villagers in two parties to try and gain them refuge in the free city of Dun Mordhain.

These two sets lead to three other ways into Dun Mordhain:

the Crypts, Brethren Works and Dorcha Ciuin (the Silent Dark), these are all Apprentice level decks (expansions).

These in turn lead to Urban decks inside Dun Mordhain (Journeyman level decks).

Followed by Skilled level decks where the Heroes have now settled their people and can choose where in the map they wish to visit next.

At this point if you journey between two points on the map all of the assets you have purchased to date can be reused as side quests along the way.

Finally please note that any Environment can be played with any Foe, so every time you buy a new deck you mot only get a new game experience but can replay any previously purchased Environment with your newly purchased Foe.

And for the truly keen you could take some or all of your Environments together and create an enormous map. This would be a Multi Environment Giant Adventure or MEGA game.

As far as other projects yes we currently have twenty titles under development. Those closest to production are:

Lord of the Horde – Dominate rival tribes, conquer the human lands and duel for shaman’s honour as you bid to become Lord of the Orcish horde.

For Queen & Company – a game of gothic noir, build up a faction from Victorian Britain and do your best to investigate strange goings on in Victorian London, pursuing your own agenda at the expense of others. Play against one another and the game itself.

Beastie – comedic fantasy, Cracklefinger Head Teacher at the Goblin University has lost his beloved pedigree Jabberwocky Jabsy. You must find him a new pet, through quests, bestiary hunts and any means at your disposal. Will you risk a beautiful but stupid pedigree Cockatrice running amok or plump for a mongrel (draws cards quickly) greater…tufted…bunny…snake?

It sounds like plenty of content exists in Legends Untold, even if you are just using cards.  Look for it on Kickstarter November 15th.