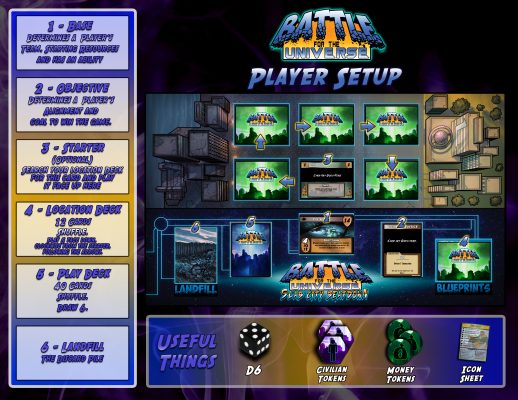 Games based on comic books have come a long way, with Teenage Mutant Ninja Turtles: Shadows of the Past, the DC Deckbuilding Game, and Marvel Legendary becoming hits.  However, it’s not often that you’ll see a game based on a fictional comic book.  Other than Guardians Chronicles and Sentinels of the Multiverse, I can’t think of any board games that use an unknown comic setting.  Battle for the Universe is going to try to give its own spin on the comic genre.  I asked the designer Jonny Hinkle eight questions on his game up on Kickstarter now.

Who are you and what are some of your gaming influences?

Well, I graduated with a degree in Sequential Art (Comics) from the Savannah College of Art and Design. I then developed various networking acquaintances in the comic industry, as well as attempted to self-publish. I submitted written work to the TopCow 2013 Talent Hunt and was selected as a Runner Up. TopCow published a short comic I wrote for Artifacts: Lost Tales.

I have also played many competitive games, including Magic the Gathering, Legend of the Five Rings, Heroclix, Doomtown, and more. Eventually, I found a creative partner to work on digital paintings and began doing illustration work for various games, including Doomtown Reloaded, Epic, Universal Fighting System, and others.

I figure, hey, I can do artwork for games. I enjoy games. So why can’t I make a game? So my co-creator Billy Miller and I combined our resources — and vast comic characters from all of the different stories we had planned to create as comics — and developed those into a card game.

How did you come up with the idea for Battle for the Universe?

I began working with game companies on various illustration work, and my co-creator and I had already developed various characters for comics. With our love of competitive games, and our vast storylines and characters, we decided to try and make a card game that embodied our love for comics, and our love for games, and the basic mechanics for BftU developed.

Each player has their own deck. Are they created before the game is played or simultaneously?

The kickstarter will offer pre constructed decks for play, which allow the players to play the game immediately, but we encourage players to then create their own unique decks and themes, so that they can enjoy the game in their own way.

What is the general gameplay of BftU?

Each game of BftU is different depending on the decks the players choose to play. But the general gameplay involves building resources so that the players can recruit their characters, buy objects, and pay for actions. The characters then move around a randomized “Slab City” which involves our unique location mechanic, and each player attempts to be victorious through their chosen objective, be it controlling Locations, Beating up your enemy, Having lots of Civilians, or Having lots of Money.

Why use so many different resources (clout, money, and civilians) within the game?

Well, Clout is your teams “influence” how well liked or feared they are by the different places and people in slab city. The more Clout you have, the more you can accomplish.

Are the heroes rescuing civilians? Are the villains Kidnapping them? There are also many “billionaire” characters in comic stories, so incorporating them into the game was easily done when making those as “resources” available to manipulate.

You have heroes and villains. Can the game be played with two heroes or two villains against each other?

Yes, just as in comics, heroes don’t always get along, and villains have issues with each other too…sometimes those differences end up telling amazing stories, and we love the idea that players will have heroes quarreling with heroes, and villains taking on villains.

Mechanically the only variable here, is that players will randomly decide which player goes first as active player, where as when there is one villain and one hero, the villains always go first (because the villains have to be being bad for the heroes to respond.)

Are you working on rules for more than two players?

Not currently, though we are open to that potentially in the future! We also encourage players to be creative and create new formats if that works out for them!

Do you have plans for expansions if the Kickstarter is successful?

Yes, our first expansion is already planned out.

Where Slab City Beatdown is the core box, and where the story begins, the story will continue in our first expansion “Bomb Threat in Bakerstown.”

Battle for the Universe sounds similar to Sentinels of the Multiverse with some resource management.  Be sure to check out the Kickstarter page for more details.