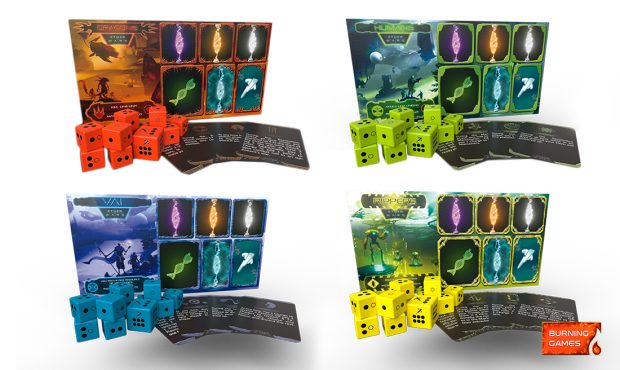 Burning Games is most notably known for FAITH: The Sci-Fi RPG.  It is a system that doesn’t use any dice.  However, they have a Kickstarter for a new game that relies heavily on dice, Ether Wars.  Since it was such a different endeavor from their original game, I wanted to find out more.  Jon Egia was able to answer eight questions about this game.

Your previous Kickstarter was the FAITH RPG. Why move from an RPG to a pure board game?

We see ourselves as a game publisher not tied to a single genre or format, and even though FAITH: The Sci-Fi RPG and its companion adventures are our flagship title and dearest to our heart, we want to release all kinds of games that live up to our standard.

We discovered Ether Wars at a convention in Spain and instantly fell in love with it. When its Kickstarter campaign failed to fund, we reached out to the designers to work with them on a potential relaunch, and we feel now is the right time to go for it.

As a funny side note, while FAITH is an RPG without dice, Ether Wars features more than 50 of them!

What is the objective of Ether Wars?

The objective of Ether Wars is to obtain a certain amount of Ether, depending on the number of players. In a four player game, you win as soon as you have five Ether in your possession, which increases to six in a three player game and seven in a two player game.

Why set Ether Wars on an entire planet?

The setting tells the tale of the Etherians and their namesake planet, Etheria, the only known location of Ether in the Universe. Etherians will leave the planet soon to ascend into a higher realm, and have deemed it too dangerous to leave this powerful source of energy up for grabs. So instead, they have set up the Ether Wars, a high-stakes tournament that will grant the control of the Ether to one of the four species of the game.

This momentous battle will take place in Etheria, and will ask the combatants to use all the resources available in the planet, namely Crystal, Coltan, Plasma and Protein, to best their opponents and obtain the five pieces of Ether needed to raise victorious.

What do the dice represent in the game?

The battles in the game tend to escalate from small skirmishes in the first rounds to huge multi-sided battles during the latter stages. The rules determine how dice may be placed in the board and how many players can be in each area at once.

The biggest battles happen in the middle of the planet, where the Ether is channeled and the game is won. All players may place their dice-troops for epic multi-sided battles, rolling handfuls of dice trying to best their opponents!

What kind of units are there in Ether Wars?

Each species may have up to 10 basic unit dice and their Hero die with a special skill. Additionally, players may each hire one of six different Mercenaries each turn, which trigger different effects; or try and seize control of the Ether die in the middle of the board.

Are the factions symetrical, asymetrical, or dependent on an expansion or advanced rules?

They are asymmetrical. Each species or faction has four unique ability cards, and players may choose which one to use each round. Additionally, the Hero of each species has a unique skill that is triggered upon rolling certain results and may bring the demise of your opponents or give its owner a plethora of resources.

How long have you been working on Ether Wars, and when do you expect it to be available?

Our friends from Ether Dev have been working in this game for more than 2 years. Their playtesting tours have been incredibly extensive, and they have played the game with several hundreds of people. The core gameplay is rock-solid and the details only add enjoyment to the experience to make a well-rounded game.

We expect to deliver the game to the Kickstarter backers around May next year, and hopefully bring it to distribution over the summer.

It truly looks like a unique game.  If any of this looks interesting, check out their Kickstarter page now.