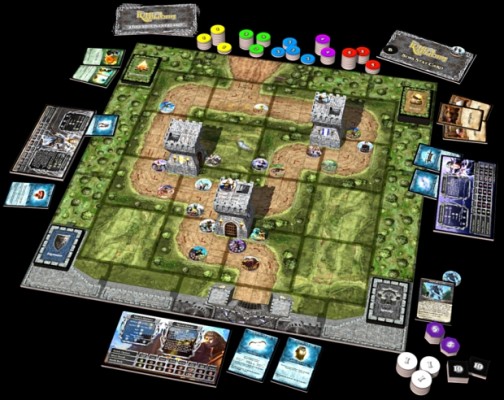 It’s not uncommon to see digital implementations of board games and vice versa, but the tower defense game hasn’t been explored very often in the board game space.  John Wrot of Gate Keeper Gaming decided that he wanted to rectify that situation and came up with The King’s Armory.  I put him through a gauntlet of eight questions to see what his game brings to the table that other’s don’t.

What tower defense video or board games does The King’s Armory take inspiration from?

The King’s Armory is inspired by a large number of video games, as I’m a bit of a Tower Defense groupie, but most largely by Kingdom Rush. Let’s be honest, Kingdom Rush revolutionized TD games forever with their institution of the Foot Soldier Mechanic. The ability to have a hands on method to outright stop the monsters from moving adds a tremendous new dynamic to the genre. On the table top this dynamic becomes absolutely key to the strategy. Who do you Tank (as we call it), and when!? …or for how long? Absolutely brand new game play on the table top.

Why did you decide to make The King’s Armory a cooperative game?

Believe it or not, I designed The King’s Armory in its most original form as a supplement to a D&D game I was running. As D&D is largely a “cooperative game,” though perhaps rarely thought of as such, so must have The King’s Armory been. Plus, in a game that revolves so heavily around protecting something (the Castle Gate that houses the Armory), “cooperative” allows the most dynamic game play by allowing us to deepen the strategies of the enemies; the ultimate reality of this is that we got to design a game to issue a direct challenge to endless people’s ability to strategize. That’s an awesome opportunity, and we struck out at it! Plus games that make you feel closer to your friends at the end of the day are kinda what we’re all about; so it was fitting that our first release would indeed be cooperative.

How does The King’s Armory play?

Setup: At the start, each Player chooses one of 7 extremely unique Heroes, sets starting Towers at strategic positions on the custom designed board that the Players build, and then gets ready to brawl.

Waves: The monsters start streaming onto the board one Wave at a time and, in a turn-based fashion, attempt to navigate their route toward the Castle Gate attacking anything in their way. The Heroes, in turn, use fantastic abilities and custom attacks to try to defeat them all before they reach their goal. Every time the Heroes clear the board, the Wave ends and they are rewarded for their success.

Between Waves: The pile of gold (and occasionally platinum!) earned can be used to: hire a new character to fill in gaps in your defenses, which then goes under the control of a Player; to buy awesome Equipment (! – No really, I love the Equipment – !); to buy Reinforcements (high powered one-shot effects that can drastically alter the game); or to fund, if they save hard for it, the creation of the Armory Weapon (there is only one used per game, it’s what all this rabble is fighting over!).

Future Waves: At the start of each new Wave the enemies get more plenteous and more powerful, at the end of each Wave the Heroes can again upgrade their defenses.

End Game: On the Final Wave, when both sides have mustered their best armies and defenses, the enemies will be joined by a singular terrifyingly powerful Boss Monster (there is only one each game, selected randomly) who will wreck unfathomed havoc on you and your defenses! It’s your job to put him in his place!

Win/Loss: If the Players, pooling their wisdom, cunning, and general awesomeness can muster a defense and strategy that destroys every Monster on every Wave, including the final Boss, they win! On the other hand, if the Monsters defeat every Hero within a single Wave OR reduce the Castle Gate to 0 Hit Points, then the Players lose. But we won’t let that happen. Will we?

What differentiates the heroes from one another?

Oh goodness, I love the Heroes. They’re so diverse. Well, on a mechanical level there are 3 types of damage that rule a large portion of strategy in the game: Melee, Ranged, and Supernatural. Each Hero has at least 1 attack that does at least 1 of these types of damage; usually each Hero is restricted to dealing only one damage type, though exciting exceptions apply. But this is just a base-line mechanic. The heroes are so dynamically different in the way they function, are so well depicted in the art and corresponding miniatures, and are given such depth in the abilities granted them that every time you play you really feel like it’s a role-playing experience, even though it’s not. The game tells its own story, through the depth of the characters and the dynamism of the experience every time. Lance Myxter of Undead Viking said just than in his review.

So do you want to play the Heroic self-sacrificial Grand General with his royal mace and impervious armor? Or the lightning slinging sorceress from a land undisclosed? Or are you the support character type that would rather hang back and enchant? Or summon and heal? – There’s something for everyone. And best of all, the set, or combination, of characters that you choose each game will directly and drastically alter your play style, as you’ll need to compensate for the abilities you didn’t choose, while maximizing on the ones you did!

Why not use the Arthurian characters instead of creating your own?

For a game of this type, with this wide breadth of fantasy, it was much more fun to fully create our own world! It also allowed us to do more. To pretend Guinevere is good with a bow, or that Lancelot can teleport, isn’t anything that invokes excitement; rather it can, though not always, raise doubts and questions. Plus it’s a mold you know, so you try to fit into it. With characters you’ve never heard of, with backstories (in the manual) just deep enough to get you started… you get to make of each character what YOU will. And that’s a lot more fun for everybody. After all, “This is your game.”

How do you keep The King’s Armory balanced whether playing it solo or you have seven Players at the same time?

Good eye, Keith. The game scales in difficulty based on the number of Heroes being playing at any given time (normally 1 per Player). So if you have 2 Players, you have the base number of Monsters attacking you; each Player you then add directly increases the number of Monsters that appear each Wave. After a while the Heroes start breaking the curve, so the average difficulty of each Monster summoned increases to match it. Conversely, when playing solo, there are fewer monsters, and the single Hero is granted more Rewards at the end of each Wave to help him build his defenses up more quickly.

Where can people find out more about the final edition of The King’s Armory?

The best place is your local FLGS. If they don’t have it yet, suggest they pick it up, and ask them to order you a copy while they’re at it. With a guaranteed sale, they’ll gladly get some in stock.

For details, and Expansions, and to watch reviews, etc, I suggest you visit our webpage at www.GateKeeperGaming.com or look up The King’s Armory on Board Game Geek. We’ll also be available at GenCon 2015 at booth #3036 in Entrepreneur’s Avenue and we’d absolutely love to meet you in person if you’ll be there.

Thanks again, Keith, for interviewing me, and giving this awesome opportunity to me and your readers!

So if you are looking for something unique in your gaming library, then check out The King’s Armory.