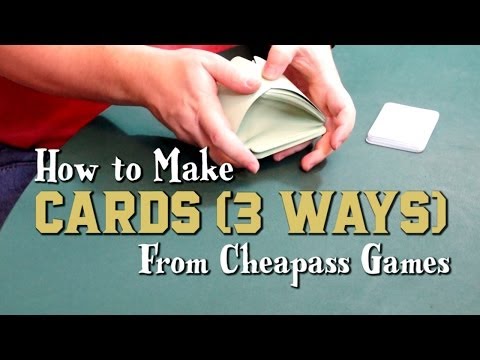 It’s not uncommon for modders to make it into the video game industry.  Epic Games holds contests for those who can create something unique with their Unreal Engine.  Not long ago a new texture enhancement was released for the original Deus Ex.  RPG Maker software has allowed novices to create their own story and gameplay.  Indie studios have taken off with all the resources available.  However, there isn’t a standard set of components for a prototype.  However, Jeff Tidball and Jeremy Holcomb decided that they wanted to spur some creativity amongst potential board game designers and created The White Box on Kickstarter now.  I was able to ask Jeff Tidball eight questions to find out more about this project.

What is your experience in the gaming industry?

I got my first paid freelance gig with The Unspeakable Oath in 1996 or so, and managed to get a job at Atlas Games about that same time as a part-timer, writing PR and doing promotions. I wound up as the line developer for Ars Magica in 1998, published my first board and card games about that time, and just kept at it. I’ve worked in staff (or staff-like) positions for Atlas Games, Decipher, Fantasy Flight Games, Green Ronin, and a pair of folded digital game publishers. I’ve done writing, design, and consulting work for twenty or more publishers, taught game design, won an ENnie (for Eternal Lies), was nominated for a Diana Jones Award (for Pieces of Eight), and won’t shut up about how great games are. So: Twenty years of a little bit of everything.

What inspired you to create The White Box?

Well, Jeremy Holcomb is the true creator of The White Box, but when I saw it, I thought it was the perfect project for Gameplaywright, which is a side project that Will Hindmarch and I operate, whose goal is to publish non-fiction about the intersection of games, stories, and the work of creating those things.

The White Box is maybe even better than our previous Gameplaywright titles — books, all of them — because the other components in the box are so effective at promoting the idea and the activity of games. It’s not just encouragement and advice, it’s a collection of things you can actually pick up and make a game with. So that’s what made me want to publish it, first and foremost.

That, and my unshakable belief that designing games is an awesome thing to do, I guess. I want to spread that to as many people as will listen.

When you start designing, do you look at components and try to create a game, or do you start with an idea and then use component to fit your idea?

I, personally, almost always start with ideas. Lots of my credits list is licensed games — Horus Heresy, Doctor Who Time Clash, my development work on The Lord of the Rings RPG and the Dragon Age RPG — and so those obviously start with an existing IP and adapt it to the needs of the format.

My design for Pieces of Eight is a half-exception. It’s a game played with minted metal coins. That concept arose from a discussion about how best to make a game that could be played while standing in line for a ride, say, at Disneyland. Pirates came from coins, came from wanting components that were totally impervious to destruction while also being trivially easy to carry and store on your person.

But the real takeaway, in my opinion, is that you can — and should — start anywhere. It doesn’t matter; no approach is incorrect.

What do the books included contain?

The White Box Essays contains (including current stretch goals) 23 essays about different facets of game design. One of them, relevant to that last question, is about whether you should start with story or mechanics when designing a game. Essays touch on nearly everything related to designing and publishing games, from different ways you might approach the endeavor (i.e., do you *really* want to be both a designer *and* a publisher?), to ways to sell your design to other publishers, to strategies for playtesting, to how you can expand your audience in easy and obvious ways.

Does The White Box cater towards a particular game genre?

The essays focus mainly on board and card games (rather than, say, roleplaying games or digital games), while the generic components are mostly related to board games. The key reason for the latter is not because we want to slant The White Box’s utility away from card game designers, but rather, because cards are best prototyped on office paper that comes out of your printer at home. We can give a lot less value when producing cards than we can with things like meeples and dice.

Why aren’t there any cards included?

Ha! I guess I got ahead of myself with that last question, so I’ll go into a little more detail.

In my experience creating card games, you’ll wind up creating (and then throwing away) many iterations of card designs. If we provided a deck of blank cards — heck, if we provided two — you’d wind up throwing them away with your second prototype, or you’d wear out your eraser preparing them for re-use. Maybe worse, you’d be tempted to not make changes that your playlists said you should because you’d be dreading the waste of the cards you paid for, and the hassle of making changes.

It’s also just plain very easy to create cards with a computer, printer, and set of commonly available card sleeves. James Ernest did a great video on this; everyone who’s interesting in prototyping card games should watch it:

Will you consider game submissions for creators who use The White Box?

Gameplaywright doesn’t publish games at all, but Atlas Games (obviously) does. When Atlas is accepting submissions, we accept them from everyone. So, at those times, absolutely yes!

We’re not accepting any right now because our publication pipeline is full for 2–3 years, and because the time we were spending reviewing submissions was preventing us from working on the games we had already signed.

Where does the name “The White Box” come from?

That’s Jeremy’s name for the project; I honestly don’t know. My guess is that it derives from the idea to provide a blank slate for the buyer’s game design.

The Kickstarter has plenty of pledge levels, and the books alone are worth the price of admission.  Be sure to check out the Kickstarter page for more details and get your own copy if you want to try your own board game design.