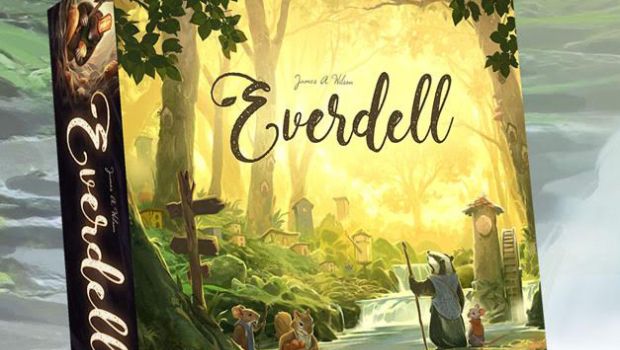 Publishing a game from a new designer is often a risky proposition.  However, even Richard Garfield, Eric Lang, and Reiner Knizia had to start somewhere.  James Wilson’s first game is coming to Kickstarter with the assistance of the Game Salute spinoff Starling Games.  To find out more about Everdell, his first game, I asked him eight questions.

How did you get into designing games?

I’ve always been a creative type—my childhood was seasoned with Legos, drawing, games (video and board), reading, and writing. I spent nearly a decade pursuing a career as an author. Notice that I said pursuing a career; though I did land an agent and published a few books, the book industry is a brutal place in which to make a living. I never quit my day job.

In 2009, my wife and I purchased our first “real” board game: The Carcassonne Big Box. We were hooked. It completely transformed my idea of what a game could be, perhaps should be, like. I even phased out of playing video games—I was just so enthralled with this new form of entertainment.

It didn’t take long for me to start tinkering around with my own ideas for games. The wonderful difference between writing novels and designing games is that you can work on a prototype for a couple weeks and then throw it on the table and immediately share it with someone else. With writing, I would spend months and months penning a novel before finally sharing it—and then people usually only read your work once. Games just have a better shelf life.

Thankfully, one of those game design ideas I tinkered with actually turned out to be worth the paper it was printed on.

Where did the idea for Everdell come from?

My wife and I were big fans of Agricola, Stone Age, Race for the Galaxy, and 7 Wonders. All of those games saw tons of play time at our table.

One evening after playing Agricola, I was looking at all the minor improvements and occupation cards I had played, and wondered what Agricola could be like if the main heart of the game was those cards, and all the other worker placement details were secondary. It was basically flipping the focus of the game around. I thought that Race for the Galaxy sort of did that, but the worker placement, resource-gathering aspect was not there in RFTG.

So I decided to see if I could make something.

Little did I know that the project would take me over 5 years.

Is Everdell a tableau-building game or a worker placement game?

Both! That was the design goal from the beginning—to combine those two genres into one. I like aspects of both of them, but I wasn’t aware of any games that combined them into a streamlined system that offered the replay value I was looking for.

I think it would be fair to say that if you threw Stone Age and 7 Wonders into a pot, stirred and simmered for 5 years, you would end up with Everdell.

I hope that fans of both genres will find something to enjoy in the design.

Why include “Critters” instead of people?

When I pitched the game to Starling Games, it had a rather generic fantasy world setting. Thankfully I had managed to avoid elves, dwarves, and orcs, but Dann May, the lead developer, really wanted to see the game have a more unique setting. His first recommendation was shifting the game into a woodland setting where the citizens of your City were actually forest critters, like Redwall, Mouse Guard, etc.

I immediately loved the idea, and then we spent a few months recreating the prototype to help imagine this new world. It really fit nicely with the game—better than the general fantasy setting—and just gives the whole package that extra little charm.

Add in the amazing artwork by Andrew Bosley, and I think we’ve created a world that gamers are going to love living in.

Did you institute having eight random face-up cards in the game to help mitigate slow starts due to bad starting hands?

In the early years of development, those face-up cards were not part of the design, mostly because players had an unlimited hand size. This proved to be problematic for a number of reasons, primarily information overload, and there really is a limit to how many cards you can comfortably hold. So I established a continual hand limit of eight cards, but in order for players to find and play the cards they wanted, they needed access to more.

Having those eight cards face-up in the middle helped to open up possibilities while still keeping the hand limit. It was also a way to introduce some light player interaction, because there can be a face-up card that you really want, but someone else might beat you to it.

Why use the seasons thematically for different stages of the game instead of using years?

Within one season, a player will add maybe four or five cards to their City, and it just wouldn’t feel right to say that you were only able to expand your City that much in an entire year.

Seasons are also important to forest critters. When the game ends, winter has arrived. We think that’s a nice thematic tie-in. Also, the artist has done a great job representing all the different seasons through the art, so you won’t only be seeing a perfect sunny day; some of the buildings are shown in winter, summer, night time, and so on. It really feels very atmospheric, like you are peering into this charming little world.

Were solo rules always a part of Everdell?

No, this happened after Starling signed the game. Dann encouraged me to see if I could come up with something, so I decided to sit down and try to grind out a good system.

What I really wanted to avoid was an AI opponent that required all sorts of bookkeeping and maintenance. The AI had to be so smooth that its “rules” never got in the way of you playing the game. I also wanted it to be competitive like a real opponent, and keep all the same goals and gameplay you have in a multiplayer game. It needed to feel like you were playing Everdell, not something that felt “inspired by” Everdell.

Are you looking to expand the world of Everdell into other games?

Absolutely. Of course, this depends on the success of Everdell, but in addition to expansions, we’ve already chatted about the potential for other games in this world. I have one in particular that I’m eager to dive into, and like Everdell, it would be taking some aspects from multiple genres and combining them together to make something new.

We’ll just have to wait and see what the seasons have in store for Everdell.

Be sure to look for Everdell on Kickstarter.  It looks like it has wide appeal being approachable for non-gamers with enough choices to keep gamers interested.