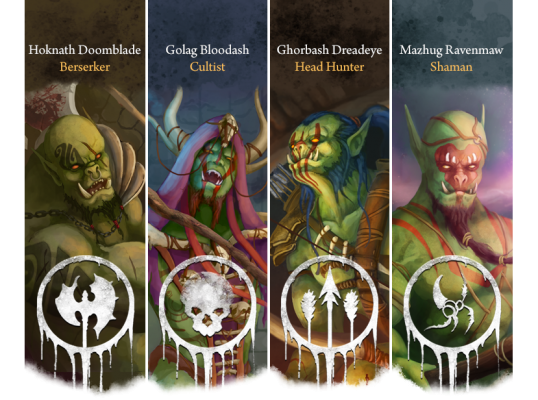 It seems like dungeon crawlers are trying to outdo themselves with bigger and more detailed figures.  However, Ravage – Dungeons of Plunder takes a couple of new approaches.  The first is that the dungeon is dealt out as you play.  Three different modes are included.  Finally, they call it an “anti-hero dungeon crawler.”  To find out more, I asked the designer Ian Schofield eight questions about the Kickstarter.

You’ve been involved in the gaming industry as an illustrator. What inspired you to move to designing your own game?

I was creating artwork for Achtung Cthulhu drawing ww2 horror and then terrain artwork for terra tiles the misty moorlands and coasts and rivers, which was great but none of it was high fantasy, the reason I wanted to become an illustrator in the first place. So I thought I would create my own game the dream project I would have chewed my right arm off to be involved with that would be high fantasy, a dungeon crawler and have evil characters as the players. It was a good job that I picked a topic I am passionate about as it’s taken me 2 years to create, design and illustrate Ravage.

You call this an anti-hero game. What makes the characters different than the typical dungeon crawler?

Not many heroes can summon their own undead characters to run around the dungeon and fight for them. Blood wield your enemies where you take control of enemies which you can use to attack other enemies. You are also smashing in the faces of your enemies and collecting their teef to buy goods from the sneaky goblin, who has trap kits, potions, and modifier cards such as lucky ears and dwarven toes….. “Ain’t no heroes in this game”.

What are the different types of orcs you can play?

Mazhug Ravenmaw – A Shamen who can transform into a raven or bear, use a spirit wolf and can blood wield.
Goals Bloodash – A Cultist who summons undead and can drain life from his enemies.
Hoknath Doomblade – A Berserker who frenzies and can attack multiple foes.
Ghorbash Dreadeye – A Head Hunter who uses poison and fire arrows.

What kind of enemies will these orcs encounter in the dungeon?

Some great races, such as poisonous snake warriors, skeletons, imps, devils, spiders, harpies and entangling roots. All the monsters have levels so they could be level 1-4 and any monster above level 1 has critical hit abilities so if they roll the required amount they perform a special action, such as Tail Strike or Captivating Song.

The bosses in the game are a lot tougher and hit harder and also have their own unique attack cards, so each turn they perform different actions giving them an AI. The warlock may use his life drain and the cave serpent may use his fire breath for example, but each set of cards is themed to that boss.

There is still one monster race and a boss to be added to the game, these will be drawn up with the help of the Kickstarter backers to make the dungeon even more perilous.

What are the differences between the three modes of play?

I wanted a game that had 3 modes of play because i am not a huge fan of the dungeon master vs the players gameplay (one vs many) I prefer co-op, I also sometimes like a good backstabbing game but these games can really depend on your group, and sometimes game night gets cancelled and I want a solo dungeon crawl.

So you can play co-operatively with your friends to complete quests, bury the head, defeat the cave serpent and destroy the spider’s lair. There are 8 quests in the core game and more quests are unlockable through stretch goals during the Kickstarter.

Then there is the Backstabbing – Treachery (VS) is where you have to kill the other players to gain promotions to become the war chief. However, you aren’t allowed to just attack them directly. You each control the dungeon and monsters that you pull on your turn, pitting them against your friends, setting off traps, looting your opponents whilst you try to keep the dungeon at bay. It’s a tactical backstab your friends mode.

And finally a quick game – Solo play you need to survive the dungeon and its random boss encounter for victory, there is no resurrection in this mode.

How did you come up with the idea of using a deck of cards to construct the dungeon?

I wanted to make random dungeons and have the players choose which way round they will place the next dungeon. Cardboard would have made the game not only super heavy but shuffling would have been impossible , so playing cards it was. Cards also allow for expansion decks…

Will there be different dungeon decks for the different modes of play?

Room cards are used in co-op mode and only for certain quests such as the Serpents Lair, Unearthed and the Summoning.

The Orcs also have a different set of skill cards to use in treachery mode.

If the game is popular enough for expansions, will they come in the form of decks or will you do boxed expansions?

I see Ravage as the start of what I hope will continue into expansions and decks, not just other areas such as woodlands, swamps, and towers but also new anti-hero packs. So many evil races never get played as a player characters in board games and its a shame, but I am enjoying changing the usual Dwarf, Elf, Human players and creating some alternative heroes.

If you’re looking for something a little different, then give Ravage a look.  It’s on Kickstarter now, and it’s a great deal for a dungeon crawler.