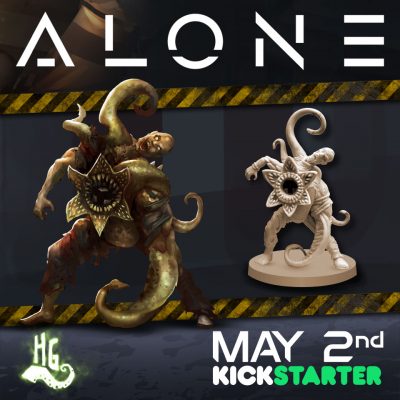 Plenty of dungeon crawlers exist on the market.  Several of them have most players competing against a single “evil” player.  Horrible Games has several hits behind them, including Potion Explosion, Dungeon Fighter, and Raise Your Goblets.  Now they are entering the miniature games market with Alone.  One twist is that one player is playing the good guy trying to escape, while the others are all playing as the aliens trying to stop him.  To find out more, I asked Horrible Games eight questions.

Alone seems to be a huge departure from your previous games. How did you come up with the idea for Alone?

The original idea was proposed to us by Andrea Crespi, a dear friend of ours who also happens to be a very imaginative game designer (for example, he co-designed our best selling hit, Potion Explosion). He is also a huge space exploration geek. Two of his other games are 1969 and Apollo XIII, can you see the pattern? For Alone, he was inspired by science fiction movies, like Alien by Ridley Scott, and video games like Dead Space…a single, lone hero forced to face a dangerous situation.

We’ve seen many one vs many games come out, but usually it’s a “bad overlord” against several heroes. Why have three evil characters against one good one?

One very good reason: because no one ever did it before! Also, because it is a very different experience. In traditional cooperative dungeon crawlers, the “good” players have several threats to face all at once, but they can rely on each other. Also, their “nemesis” is just one person… the feeling you have when you are the only good guy, and you see three people chat and plot behind a screen, knowing they are all trying to kill you, it something really unique. And this is true for the Evil players too! No matter how careful you plan, the chance the Hero will do something completely unpredictable is always there, and to defeat him they’ll require true teamwork!

What is the objective for the hero player?

There is an overarching story spanning through several scenarios. In each “chapter” of this story, the Hero player will have a main mission to complete, and one or more side missions (to acquire some kind of bonus and/or to get rid of an ongoing malus). Find a crewmates, fix the energy reactor before everything explodes, retrieve an item and bring it somewhere… that kind of stuff. Story-wise, the ultimate goal of the Hero is to find his lost crewmates and escape the unknown planet he’s stuck on… alive.

How do you balance the gameplay to give the hero a fighting chance?

The balance of this game is one of the most difficult ones we had to face, ever. We found that there are a lot of emergent mechanics that help to keep the balancement even between the two sides without the usual “increase a Hero stat here, lower a monster stat there.” For example: the Evil players rely on their hands of cards to put the proverbial spoke in the Hero’s wheel, and more often than not they need to cooperate and play their cards in combo. But! They cannot openly reveal the cards they have in hand, and if they even try to suggest it, the hero player is just at the other side of the table… so they can’t tell too much without the hero hearing it too! Of course, there are many underlying layers of balancement in the game too, how much damage creatures deal, how many cards Evil players have depending on how many of them are playing, how effective the Hero items have to be… etc.

How does the game work if the evil players don’t have any “turns?”

While it’s true that there is no proper “Evil turn,” they can “React” to each one of the Hero’s Actions. In theory, after each Action performed by the Hero, the Evil players can React. In practice, this doesn’t happen mainly for two reasons. It doesn’t always make sense to React, for starters. Often it’s better to wait for the Hero to be in that perfect spot you’ve been trying to lure him for some time… unless he suddenly makes something unexpected, of course! Second, the number of cards they have in their hands is limited, and to React they need cards… so they have to React when it’s really useful.

Where did you get the inspiration for the alert tokens?

In one form or the other, they have always been in the game. In the beginning they were “radar signals” that could be items, nothing… or monsters and traps. Then they became specific traps with specific effects (that revealed to be quite difficult to use effectively). With time, they evolved in their current form. Still a way to make some nice bluffs, but also a way for the Evil players to enhance their Reactions, and since their number will tend to grow as the game goes on, they are also a measure of how dangerous the situation has become for the Hero!

It looks like the game has incredible miniatures. Where do they fit into the game?

On the complete map, hidden behind the screen where the Evil players plan their mischievous plots, everything is represented with tokens (there can be a lot of stuff there, they are just the most practical thing to keep things easy to manage for the Evil players). But on the Hero’s side of the table, where we have a close-up representation of the Hero’s point of view on things, having highly detailed miniatures to represent the various creatures, allies and foes the Hero may encounter adds so much to the player immersion. It’s much more satisfying for the Evil players too!

We think adding multiple heroes to the game would kill the basic concept of Alone, which is also its strongest selling point. We think the “one vs. many” concept won’t be changed by any future expansion. But new stories, with new, different “heroes” and different skills… that’s a thing that we can definitely see happen!

It sounds like a unique experience, and knowing the pedigree of Horrible Games I believe that they can pull it off.  Take a look at their Kickstarter page to find out more and back it!