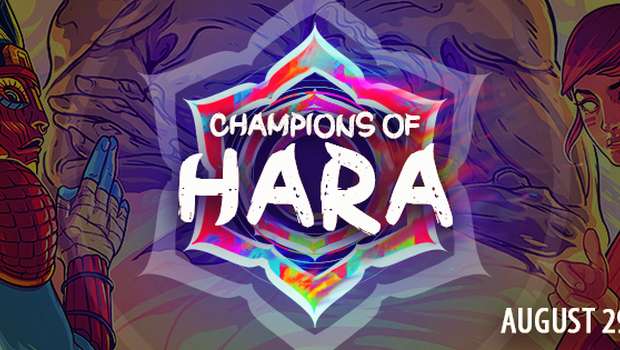 Sometimes you see a game on Kickstarter that looks good but just doesn’t have the hype behind it because it doesn’t have an established publisher.  Sometimes these games will get the attention of a publisher later, go through some spit and polish, and fund in a successful campaign later.  Greenbrier Games helped Folklore: The Affliction this way.  Now Greenbrier Games is working with a couple of new designers to bring their game Champions of Hara to Kickstarter again.  I got a chance to interview Walter Barber, one of the designers on the project.

Can you tell us a little about yourself and your gaming influences?

I’m the youngest of 4 brothers, the rest of which were all 80’s babies. Which is to say that nerdom was in my blood, and I never really had much choice in it. I remember sitting on the couch watching them play games like Final Fantasy Tactics, or Heroes of Might & Magic – in retrospect, games that naturally translated into love of the tabletop genre. I was always excited about using TCGs in ways they weren’t intended – the first “game” I ever made on my own was a pseudo war game, which used Pokemon cards as units, measuring distance by the length of a card and using the entire living room as terrain. My older brother’s MTG deck became the source for a whole backyard LARP thing. In general, I think I’ve always had the urge to make games, but for me the most important part is about using them as a vehicle for telling stories. As my tastes have developed, my biggest influences have been funky indie stuff, anything from Hellboy to Hyper Light Drifter – worlds that are weird, with characters that subvert expectations.

How did you get involved with Greenbrier Games?

I started working on Champions of Hara during my junior year of college (2013) with two of my freshmen year roommates. Senior year, the three of us won a business competition to get the seed money for the game’s art and comic book.That year we went to GenCon for the first time, and sold a micro version of the game, which got great feedback. In 2015 we took the full game to Kickstarter, which was successfully funded with a small following. A month or so later, we went back to GenCon, and crashed a designer-publisher speed dating event (which we definitely weren’t invited to) and ended up getting meetings with a few different publishers. Greenbrier Games was by far the most enthusiastic. In January 2016, I got a call from Jeff, president of GBG, that there was an opening in the company for a resourceful young whippersnapper like myself. So I came on full time, and I’ve since had the privilege of doing design and development for some of our most exciting titles – Grimslingers, Folklore: The Affliction, Zpoc2: Defend the Burbs, and a few others in the pipeline.

What’s the basic objective in Champions of Hara?

Hara, at first glance, is a pretty nice place; exotic flora and fauna, floating islands, two colorful suns – the works. But after you spend some time there, you learn that the whole thing is literally falling apart. Each scenario in the game has its own particular objective, but in general your goal is to contain the wayward energy that is causing Hara to crumble. You’re either beating up monsters, closing rifts, encountering stories, or fighting the big scary bosses to try to bring some peace to this chaotic world.

How did you come up with the board composed of seven hex-tiles?

There are a lot of games that use a honeycomb shape – I think the math behind the hexagon is just too alluring. I’m a big fan of adventure games in general, but I prefer when things are 1:1 as opposed to abstract – we knew from the beginning that we wanted the cards you were encountering to come out onto the board to actually come out on the board. That and the boards moving around as you play was a big part of the design, so the pieces had to tessellate. When you dig into the lore, you also start to see 2s, 3s and 6s as a recurring theme, and eventually the hexagon just became an integral part of the whole thing. With some many weird things at work in Hara, I think the familiarity of the Catan-looking board helps people make sense of it.

Why did you give Champions of Hara a competitive and cooperative mode?

I have mood swings, mainly. Sometimes I want to work with people… sometimes less so. As we release more of the graphic novel(s), a big part of the story is about how these different characters clash and learn to collaborate. The goal for me there is to avoid the super hero team-up tropes, which we try to turn on their heads as much as possible. But in general the two modes are their cater to the two kinds of things I like – fast paced arena beat downs, and big group puzzles that stump a whole table.

How do the scenarios differ from each other?

So narratively, each character’s story forks into two scenarios. First, you play a versus arena to determine a champion. Then that character picks one of their two scenarios for you to play as a group. When your playing, each scenario is intended to feel like an episode of a Saturday morning cartoon – there are a bunch of different villains, who want different things and each try a bunch of different approaches. In general, your goal is to defeat a particular villain for that scenario, and its the other tensions that change dramatically. You’ll always have to have your eye on two different things while you play, trying to balance your attention between the two so things don’t get out of control. Sometimes the bosses start in your face, sometimes you have to trigger a series of other events before the boss shows itself. Sometimes you’re trying to protect home base, sometimes your racing to hunt down a particular item. Each one is designed to be as tense as possible. Anyone who has played some of the other projects I’ve worked on – Defend the Burbs, Grimslingers, Folklore – know that I put a lot of value in making co-ops challenging. I want the game to both beat you up and make you feel good about it.

How does Champions of Hara scale with a different number of players?

In versus mode, the number of cards that come out on the board directly relates to the number of players. Turn order comes with variable buffs, so players who go later in a round will gain some bonuses to offset their disadvantages. And when there are more people running around in close proximity, its more likely that you’ll find yourself in someone else’s cross-hairs. In the cooperative scenarios, the amount of pounding the bosses can both take and dish out directly scale with the number of players, so you’ll need to rely on each other even more as you add more people to the mix. Certain scenarios, like the team fight, require you to have 4 players specifically, but in general they all cater to the full range. There is even some solo content planned via the Kickstarter.

If Champions of Hara is successful, do you have ideas for what might be included in expansions if there are plans for any?

We’ve got a massive expansion launching simultaneously with the core game on Kickstarter. Chaos on Hara adds 4 new playable characters and 3 new bosses, including 1 character and 1 boss that are cross overs from Grimslingers, who I’m really excited about. Coming with 4 new characters means that it includes 8 new scenarios. It also has a bunch more cards to add variance to the core game, some really cool translucent minis, and most importantly adds +2 players to the 4 player max of the core game. We’ve got a few smaller boxes planned if the Kickstarter does well – more characters, bosses, and scenarios. I’d love to incorporate a few more zones (the flower shaped hex boards) and hopefully jump to some of the places the story is going to go, which in general is a further descent of this colorful, happy world into darkness and destruction. Ya know, 2017 stuff.

Champions of Hara looks to have a unique mix of mechanics together.  If you want to find out more about Champions of Hara, then be sure to check out my Origins 2017 video with Greenbrier Games.