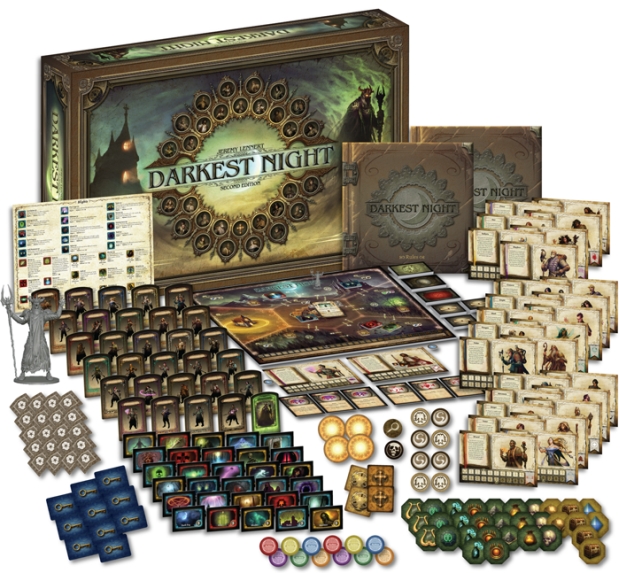 While the board game industry is small, Victory Point Games is one of the smallest independent companies within the niche.  You might not have heard of them, but they have produced several unique games.  One of their biggest hits is Darkest Night, and they have headed to Kickstarter to create a Second Edition to truly upgrade the game.  I got to ask Grant Taylor eight questions about their project to see why they took this path for it.

Can you tell me a little bit about yourself and your involvement with Darkest Night Second Edition?

I am Grant Taylor, and I am a leader on the Victory Point Games Darkest Night: Second Edition Kickstarter team.

Darkest Night has had great success, along with a large number of expansions. What do you attribute to its longevity?

Jeremy Lennert, the game’s designer, has tapped into something really unique with this game. He has created a world that people find very accessible and easy to invest themselves in. The doom of the Necromancer and his destruction of the kingdom presses upon your party of heroes right from the beginning. In addition, being able to choose from the large number of heroes included in the game lets you take the driver’s seat of your adventure.

How did the idea of a second edition of Darkest Night come about?

As a company we’ve been combining the in-house production of our games with out-of-house manufacturing as a way to reach more people in the hobby. We’ve called these out-of-house produced games our “Premier Line.” You could say that this is our second bite at the apple to introduce some of our most popular games to a wider audience that might have missed those titles when they were first released.

Darkest Night is our best selling game and, perhaps because of that, it is the game that we are most well known for. It is the kind of game that deserved to be upgraded a Premier Line title. We’ve done this for some of our many other games including Dawn of the Zeds and Nemo’s War. When it came time to discuss our next Kickstarter, we decided that it was high time that Darkest Night should receive such a Premier Line upgrade.

What are the differences between the current edition and the Second Edition?

First and foremost, all of the expansions from the First Edition have been integrated into the Second Edition base game. This allows newcomers to dive right into the complete game, resulting in a better first-time experience (as well as a second, third, fourth…).

On top of getting all the great gameplay from the First Edition, we are including 10 new Quest, Artifact, Mystery, and Darkness cards that Jeremy Lennert has designed for the Second Edition. Our stretch goals feature even more new content for the game as funding increases.

The art for all the components has also been given a complete overhaul. Now the world of Darkest Night is fleshed out and beautifully thematic with an even bigger board and gorgeously illustrated cards.

Last, but certainly not least, is the inclusion of a miniatures add-on that backers can add to their pledge. If standees are not thematic enough for you to immerse yourself into this rich fantasy adventure, you can add on miniatures of your individual hero to really be represented on the board.

How are you making the Second Edition something that owners of the original edition will want to get, or are you providing some kind of upgrade kit?

The art and component upgrade combined with the new content can certainly be a tempting offer for First Edition owners. However, for those who feel completely content with their VPG printed edition, we have already announced that there will be a Capstone kit for First Edition owners to complete their set that we will publish after the Second Edition ships.

This Capstone will be comprised of all the new content that is unlocked during the Kickstarter campaign and will be available for purchase from our website. The price will depend on the amount of content that is unlocked and must be retooled for our in-house printer, but from our current vantage point, it looks like it could include about the same amount of material as the First Edition base game, and will have a similar price.

Will the previous expansions work with the Second Edition?

All previous expansions have been incorporated into the Second Edition!

Do you plan on releasing expansions specifically for the Second Edition?

There is currently nothing further planned for the Second Edition as Jeremy Lennert has expressed interest in moving on to other designs. Should inspiration strike him, however, we are certainly keeping the door open for him to discuss the possibility with us.

When do you expect this to be published?

Darkest Night: Second Edition is expected to be fulfilled by March 2017.