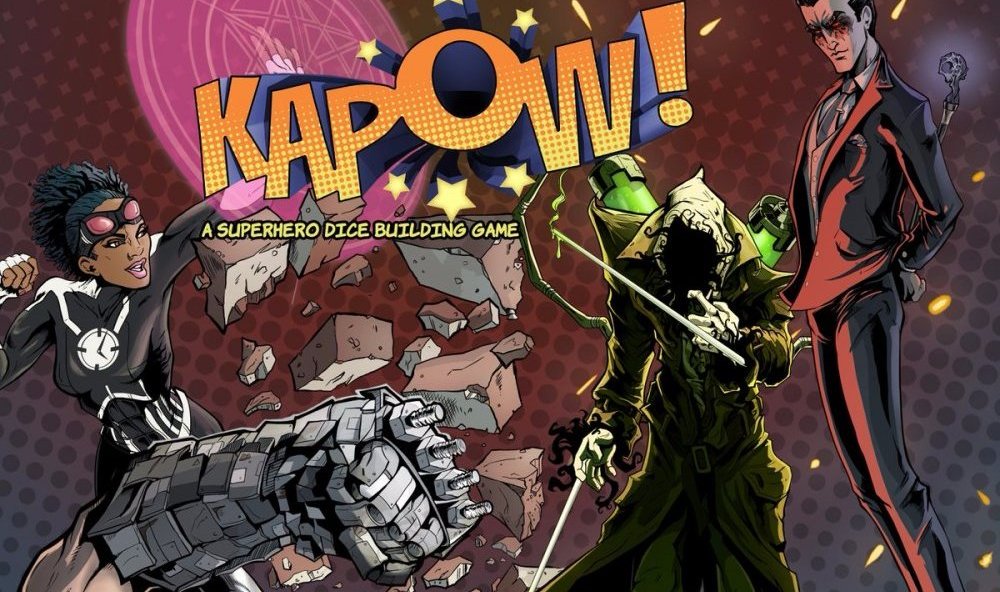 At Origins a publisher wanted to make sure that I checked out a game that he was working on with a new designing group.  I was able to check it out and was impressed by it.  Basically you played two comic book characters fighting against each other by rolling dice.  What made it unique was the fact that you could add sides to specific dice.  Now they are looking to fund it on Kickstarter.  I was able to ask designer Doug Hettrick eight questions to find out more.

How did the team at 2 Ton Porcupine come together?

The three of us, Larry, Carl and Doug have been playing and designing games for several years independently from one another. We have games published from Fleer, Lock-and-Load and Eagle-gryphon. But, for a long time we did not know each other. Then a new game store called The Boardroom opened in Middletown, CT, centrally located to all three of us. They held a play testing event for local game designers and we all showed up, the rest is history.

Where did the idea for Kapow come from?

I think there were 3 main influencers that lead to Kapow! First, I always liked the idea of dice, but I disliked the idea of a single die roll. A single roll has a flat number distribution, which is very boring. But when you have two or more dice, you start to get great bell curves of distribution. This to me was exciting design space and lead down the path that eventually ended with Kapow! Second, we like to balance individual tableau building with competition. There are plenty of games that have very good mechanisms that are essentially 4 way solitaire. We wanted a more interactive play experience. You should be able to build and expand, but then compete against each other with what you have built. This balance of solitude tableau building and competition flows throughout our designs. Third and lastly, we fell in love with the buildable dice concept and wanted to use it in a new and unique way within the game. Early prototypes did not have the buildable dice, and the game was good, but not great. Once we starting using the buildable dice, the game really came together.

How difficult is it to create a new superhero universe?

In a word, hard. There are two ways to build a superhero universe. The first way is to copy all the well known DC and Marvel tropes with slightly different names and small tweaks. We didn’t do that, we took the much harder path of designing our characters from the ground up. In then end, this lead to a much richer design and uniqueness in our characters. For example, it allowed us the flexibility to create a deaf character that uses weaves sounds as a weapon (Elusivity), or a mechanic who welded his own set of superhuman arms out of spare car parts (Tough Nut). A lot of the character design influenced what the character could do within the mechanics of the game, and the opposite was also true. Our Timeout character, for instance, has a purple shield she uses on attack and defense which directly relates to the toughness icon she loves to exploit within the game.

Why use the aesthetic of the Bronze Age of comics?

So the three of us grew up in the Bronze Age of comics and it really appealed to us. It was also the trend towards darker story lines that we really enjoyed. You have to remember that the CCA (Comics code authority) was still in full swing at this time, but the writers and artists started to chafe at the arbitrary restrictions. So, they were looking for ways to subvert the norm and speak with there own voice. Please draw as many parallels as you would like from there! If it wasn’t for the Bronze Age, we wouldn’t have ever evolved from the DC Superman to today’s Deadpool. So, it’s a time we love to pay homage to. We even have our own CCA(ish) logo on our ‘books’!

How do you make the different characters unique at the start of each game?

Each character starts with their own starting dice pool, starting health level, and their own unique set of 4 or 5 abilities. These abilities are individual to each character and can only be used when playing with that particular hero or villain. Our main bad-guy, the one and only Victor Kane, for instance, has a permanent +1 Attack Kicker and a low starting heath. So, his play-style is to attack first, second and last. He wants to end the game as quickly as possible, not allowing his opponent to power up to come back at him. Each of the characters feel entirely different when playing them, exploring the ins and outs of each character is a lot of fun.

Have you seen any weight issues on the buildable dice when some sides are filled in and others aren’t?

We have played the game 1000’s of times and have never see any evidence of the weight making a significant difference. However, during play testing, it was a comment that came up several times. Since it was a legitimate concern from our fans, we took it to heart. So, to address the problem, I’m happy to say the game will come with blank faces you can use to balance the dice during play.

The three and four player variants take Kapow! into new and exciting directions.

The four player variant allows for an all-out winner take all brawl where anyone can attack anyone during play. But, there is also a 2 vs 2 mode that adds a Duo-board that both allies can exploit. The set up for a 2 v 2 game has each team of two sitting across from one another. Between the teammates sits a Duo-board that either teammate may assign dice to, activating useful powers to help each other. And then, during the power-up phase, either player may take any dice from the Duo-board, allowing teammates to swap dice between one another boosting each other even more!

The three player mode is very different as it enables a 2 v 1 game. One player assumes the role of a to-be-named mega-villain. See our FB page for the naming poll! The other two players pick characters who try to take our mega-villain down. The mega-villain has his own player board with a full set of new powers, plus a small deck of cards they can use to power themselves up during the game. He’s a tough villain to fell, but what can you expect from a villain who is more tree than man? He’s part chainsaw too, but try to not stare at it, he gets a little touchy.

Do you plan on bringing out expansions with new heroes and villains?

Yes, yes and yes! We have several stretch goals for new heroes and villains. We plan to release them in pairs, one hero and one villain. These pairs are archenemies of one another. Each nemesis pair introduces a new mechanic to the game.

The game has a high chance of funding, with 60% of the funds raised with 20 days left to go.  Check out the Kickstarter for more information.