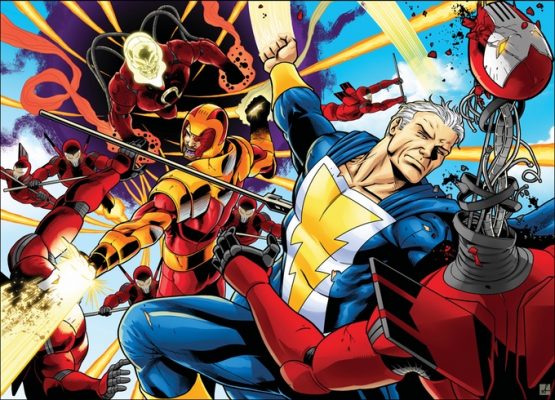 Sentinels of the Multiverse became such a hit that it created a brand new publisher.  They are one of the true success stories of bringing their game to Gen Con and getting people to notice.  They’ve had plenty of expansions come out for it, but now the system is being brought to a new universe, Earth-Prime where the RPG Mutants and Masterminds from Green Ronin Publishing is set.  I was able to ask Chris Pramas eight questions about the Sentinels of Earth-Prime Kickstarter.

How did you get into the business of gaming?

I started as a freelance writer and game designer in the early 90s. I wrote for a bunch of different roleplaying games before starting my own publishing house. That first company was something of a debacle but I learned a lot. Then I got a job as a staff designer and later creative director at Wizards of the Coast. While there I started Green Ronin Publishing as a side project. It went so well that when I left Wizards in 2002, I just stepped into doing it full time.

What’s the setting of Mutants and Masterminds?

The setting is known as Earth-Prime and it dates back to the earliest days of the Mutants & Masterminds RPG in 2002. Steve Kenson had a setting called Freedom City that was the first supplement for the game. While focused on the city, the book also had some info on the rest of the world. Earth-Prime would then grow over three editions and many books in the Mutants & Masterminds line, including a West Coast sister city called Emerald City. This all culminated earlier this year with the Atlas of Earth-Prime, which explored characters and locations around the world.

How did the partnership between Green Ronin and Greater Than Games come about?

I met Christopher Badell five or six years ago, when Green Ronin and Greater Than Games had booths next to each other at the Penny Arcade Expo in Seattle. Then three years ago we met again on the JoCo Cruise and had a chance to get to know each other better. Much more relaxing environment on a cruise ship! It didn’t take long for us to start talking about how some sort of crossover project would be cool. Took a couple of years to go from fun idea to actual plan, but the result is Sentinels of Earth-Prime!

Were you a fan of Sentinels of the Multiverse before this partnership?

I was! When Christopher and I were on the cruise, I told him how much I had been enjoying the game. He then told me he was a big fan of Mutants & Masterminds, and in fact some of the Sentinels of the Multiverse characters had started in his Mutants & Masterminds campaign a decade ago. That’s when we knew we had to do a comic style crossover event!

Is it possible to crossover the heroes and villains of Earth-Prime and the Multiverse in this card game?

Do you have any plans for expansions after this Kickstarter is fulfilled?

We do, yes. If all goes well, there will be at least two boxed expansions.

Will we see any Sentinels of the Multiverse show up in a future Earth-Prime RPG?

Greater Than Games is working on their own Sentinels of the Multiverse RPG as we speak, and that’s their focus at the moment as far as roleplaying material goes.

Do you have any other ideas for bringing any other properties to the tabletop?

Sure! Just this week we announced that we’re bringing Greg Rucka’s awesome Lazarus comic to the world of RPGs.

We’d like to delve more into the card game and board game side of things as well. The bigger of a success Sentinels of Earth-Prime becomes, the easier that will be for us. The campaign is going really well right now. We ought to break $100,000 this week. Hopefully, we can double that or more by the time it wraps up.

It looks like they have a lot of plans.  Be sure to check out the Green Ronin website for more information about all their products and the Kickstarter page to get Sentinels of Earth-Prime.